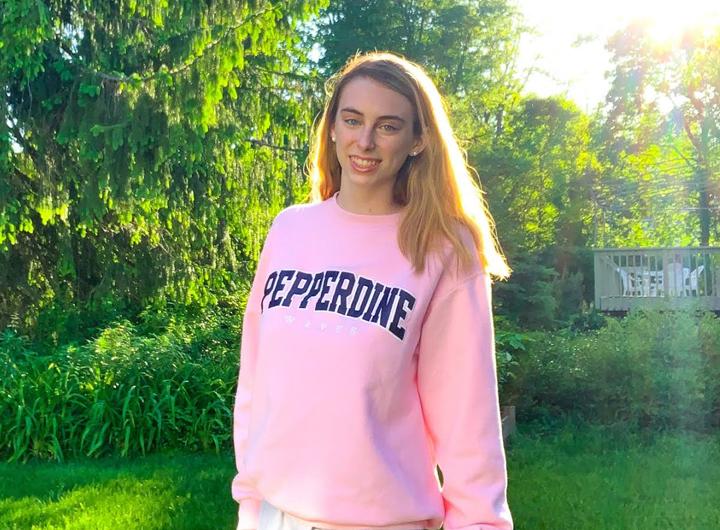 Visionary Anastasia Condolon shows off her school spirit with a pink Pepperdine sweatshirt shortly after receiving her acceptance. She said she was extremely excited to be accepted.

First-year Anastasia Condolon said she is a jack of all trades — she is a self-proclaimed singer-songwriter, actress, filmmaker, photographer and author.

In high school, Condolon, who is from Baskin Ridge, New Jersey, said she was heavily involved in the performing arts, including theater and choir. She is now taking an online vocal production course at the Berklee College of Music, located in Boston, Massachusetts, in hopes of producing her own music one day.

“I’ve been performing for as long I can remember,” Condolon said. “My first performance was at a summer camp, and I played Annie, so that was my biggest memory that really got me into [performing].”

Condolon said she performed in the off-broadway show “Annie Warbucks” as the character of Annette in the summer of 2017 at the Signature Theatre on 42nd street.

“That was one of my favorite high school memories because that was my first professional show that I did,” Condolon said.

She wrote in an email that the process to rehearse for the show was rigorous but worth it. Condolon traveled to New York City from New Jersey by train almost every day for rehearsals, and some nights she wouldn’t get home until after midnight.

Condolon said she continued performing through COVID-19 — this time taking the stage online — and even took up new hobbies.

In March, Condolon said she performed the song “Warrior” by Demi Lovato in a charity concert, Kids of Arts Virtual Concert: Lyrics for Life, to raise money for suicide awareness.

Condolon said she also started creative writing during COVID-19. She wrote a play for a theater company in New York earlier this year, but the title cannot be disclosed until the play goes into production.

Condolon said that movies and TV shows sparked her interest in film in 2019 when she made the decision to major in Screen Arts.

“I want to direct some films in the future; that’s a big thing of mine,” Condolon said. “But I also want to do some music as well, possibly to make music videos.”

Condolon said she is a big fan of the realistic fiction film genre, which includes coming-of-age films. The movie “Little Women” influenced her because of its powerful portrayal of characters overcoming different challenges such as unrequited love and grief.

“That movie sort of inspired me to go along my own path and follow what I want to do rather than just do what’s expected,” Condolon said.

Condolon has never toured the campus or even traveled to California from her home in New Jersey. Even though she said was nervous, she trusted her instinct, which ultimately led her to choose Pepperdine based on the feeling of community.

“I attended a bunch of Zoom sessions, and I just found everyone to be so kind and caring,” Condolon said. “I saw that at Pepperdine, everyone truly cares about you and wants you to succeed.

Condolon said she wants to get involved at Pepperdine and is interested in Songfest, the Feminist Club, the Cine Club and KWVS Radio. She is also participating in eSports this semester.

“It was a little bit of a difficult decision to make, but at the end of the day when I was making my lists and going through the things I wanted in a college, Pepperdine checked off all the boxes,” Condolon said.