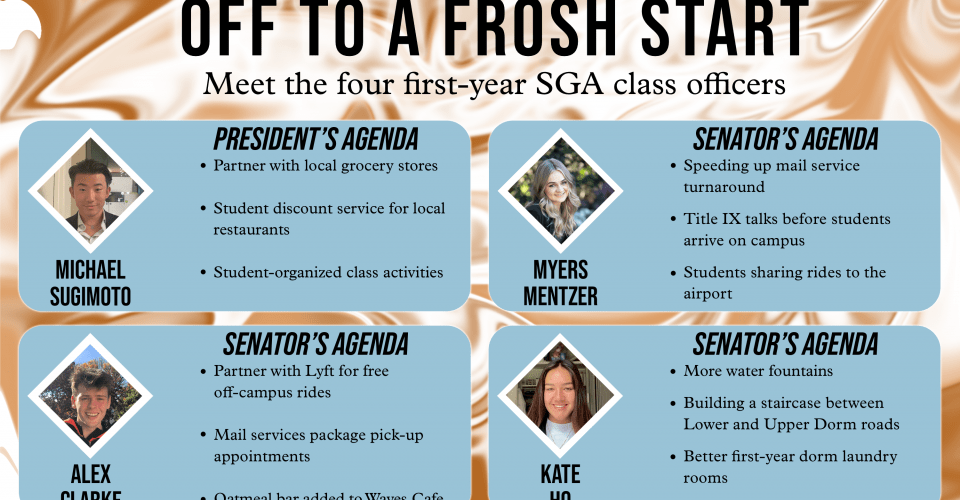 The first-year students have spoken: The Class of 2025 has officially elected its class senate and president to represent them in Student Government Association this year.

With hopes to cultivate a sense of community and take action toward improving the quality of student life, all four SGA officers said they intend to advocate for the needs of the first-year class.

“I really want to create a sense of belonging in my class,” Sugimoto said. “I want everyone to feel like their voice is heard.”

In high school, Sugimoto held many leadership roles and said he knew he wanted to continue these at Pepperdine. There was no class president position at his high school, but he was a “house representative,” which involved similar responsibilities assisting with academics and student life, he said.

Health and wellness, diversity, sustainability and accessibility are the four main goals SGA hopes to accomplish this year, Sugimoto said. As first-year class president, he said he has his own plans for how he can help further this agenda.

“I am trying to work on a food partner system with a local grocery store, whether that’s Ralph’s or Whole Foods,” Sugimoto said. “I also want to try to work on a discount service for students for the local food restaurants.”

When talking with other first-year students, Sugimoto said many voiced disappointment over the lack of gatherings and activities similar to the ones at New Student Orientation. He said he held a karaoke night for students to get to know him as a candidate when classes began and plans to continue organizing events in the future, such as a pumpkin-carving party and a Spikeball tournament.

“Having a student organize class activities makes it a little more intimate,” Sugimoto said. “It helps students be able to connect on a different level.”

With no student government at her high school, Mentzer said she found other ways to be a leader, and she hopes she can continue to be a voice for those who are also passionate about maintaining Pepperdine’s mission statement.

“We all realize we have a purpose here together, and leadership for me was found through SGA,” Mentzer said. “But also, not having service as an event on the calendar — not just being like, ‘Oh it’s service day.’ No, we need to have service day every single day.”

Mentzer said she owns a sewing business that made masks throughout the pandemic. Being able to network and promote herself is a skill she said she believes helped get her elected into SGA.

“I feel like my business has equipped me to be able to do this for others,” Mentzer said. “Because I know how to communicate with people, figure out what they want and then figure out how to get it to them.”

Menzter said she has three main goals as a senator that she based her campaign on after speaking with classmates — the first being to improve mail services.

“We’re already paying a lot for shipping,” Mentzer said. “If you’re paying for Prime and you expect something in two days and it takes another week, it doesn’t really matter. So improving that is a big thing I saw a need for.”

Making it safer for out-of-state students to travel home is an additional goal Mentzer has based on her own experiences.

“Another thing is working with students who are from out of state,” Mentzer said. “Working on flying together and getting a system where we can do rides together to the airport.”

Most importantly, Mentzer said, she is advocating for Title IX talks to take place before students get to school. She said she does not understand how students are supposed to protect themselves when on campus the first few weeks of school if they do not have information about where to find help.

Clarke said he felt inspired to join SGA at Pepperdine because there was no student government at his high school, and he wished there had been. Clarke said being a class officer is his way of leaving a positive mark on the community and making his own college experience better at the same time.

Clarke has four ideas for how he can make Pepperdine a better place — one is partnering the University with Lyft to allow students without cars to get free rides off campus, he said.

Diversifying the food in the dining hall by creating an oatmeal bar is another goal of Clarke’s. He said placing nap pods in Payson is something he has heard other students stand behind, along with setting up an appointment system to pick packages up from the Light House.

“We have to schedule when we’re getting our COVID test in advance,” Clarke said. “So I imagine that if we were able to make a schedule that I pick up my package at 11:45 [a.m.] on a Tuesday, that would help things flow a lot faster than it is going now.”

Clarke said he was thinking about how realistically he could implement the policies he stood behind.

“There’s still a lot of misinformation I’ve heard from people running for president or when people explain why they voted for one candidate or another,” Clarke said. “There’s a big lack of knowledge on what the student government can actually do.”

Ho said she was never interested in student government or any major leadership role until she came to Pepperdine.

“It was because I was scared,” Ho said. “But coming here, I realized because I’m scared of it, I need to do it. I can’t let that hold myself back, especially because I think I’d be a good fit. I just needed to push myself.

Ho said some of her campaign points were to advocate for more water fountains around campus, better laundry rooms in the first-year dorms and building a staircase between Upper and Lower Dorm roads.

To make herself approachable, Ho said she wore her signature cowgirl hat around campus and used it to spark conversation. This helped lead to students opening up to her about their concerns and needs as first-years, she said.

“I feel like I’d be good at determining what we really want and need,” Ho said. “And just being open minded and listening to everyone’s views.”

What is Coming Up with SGA

SGA holds weekly senate meetings Wednesdays at 8 a.m., in TAC room 100, which are open to the public.

Sugimoto said SGA plans to hold additional senate meetings for each class on a weekly basis. More details will be announced in the upcoming weeks.

Each class senate will also hold a town hall once a semester, Sugimoto said. SGA will release the dates and times soon. 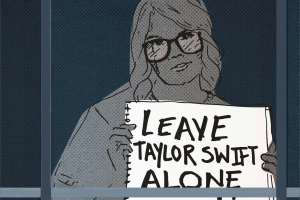 Art By Samantha Miller We take the time to reflect. In our reflection, we are confronted with a problem. A struggle. A conundrum,...
Copyright 2013 Jupiter Premium Magazine Theme
Back to top