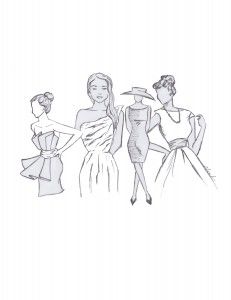 To kick-off her spring 2013 collection, designer Gheri Legree held a fashion event, which showcased her new collection and benefitted A Love Beyond Me, an organization dedicated to helping children with terminal illnesses.

The event, called “An Afternoon of Elegance,” took place at the Millennium Biltmore Hotel in L.A. on Oct. 14. Gheri sponsored the event to showcase the spring 2013 collection of her line Jon Gheri Couterier. Also featured at the show were her designer-daughter Johnae Elease and fellow designer Bynoskia Sams.

The event was truly an “afternoon of elegance” with a room full of chandeliers and men and women dressed in their best while enjoying a gourmet Biltmore meal and watching the designers present their clothes on the runway.

However, this event wasn’t just about the elegance of the fashion scene.

One of the main components of the fashion show was to raise money for the non-profit organization, A Love Beyond Me, whose primary focus, according to representatives, “is to provide a rainbow of hope to young children battling terminal illnesses like childhood cancer.”

The main feature of the benefit fashion show was the preview of the JonGheri Couturier Spring 2013 collection by designer Gheri LeGree. Gheri is a well-known celebrity fashion designer, stylist and author who was inspired by her daughter to create her own line, JonGheri Couturier.

Gheri described her own line as having “basically been influenced by the 1940s and 1950s, mostly those two eras because I love the way women dressed back then [with] their form-fitting clothes, where you can see the silhouette of their bodies and not just the clothing.”

She also draws inspiration for her line from the performing arts. “That’s who I’m targeting really,” Johnae said, “the actors, the dancers, the singers because they like to be comfortable and cute at the same time.”

Fellow designer and partner of Gheri, Bynoskia Sams, featured his line at the event as well. Models Tabitha Christopher and Alita Griffin describe Bynoskia Sams’ line as “more free form and flowing which anyone can wear because it clings to your curves just right.”

The founder of A Love Beyond Me, Dee Triggs, was present at the event and described her inspiration for creating the organization as stemming from her father’s battle and death from lung cancer and her own passion for “uplifting, encouraging and inspiring the lives of others, especially children,” with terminal illnesses. A Love Beyond Me seeks to reach out to children battling terminal illnesses by creating handcrafted greeting cards and “Baskets of Hope,” which members deliver directly to children in hospitals.

Representatives from the organization who were present at the event further described the inspiration for making the cards and baskets. They stated that the children “are going through these treatments like they are having chemo and shots all day and they lose the life of what a normal kid has per se so we just want to kind of give that to them. We craft these cards, and they are given through donations and people just sit there and they just draw and they just write … to uplift the kids.”

Dee Triggs “wants to show [these kids] that they are appreciated and that she is going to celebrate their lives so we are taking donations because her vision is to throw these big celebration of life parties and they are kind of like birthday parties because we don’t know when these kids are going to get another birthday,” the representatives said. Part of the proceeds going to A Love Beyond Me were also used for “Celebrations of Life” parties.

With the support of designers, Gheri LeGree, Johnae Elease and Bynoskia Sams, “An Afternoon of Elegance” was successful both as a fashion show and in promoting and raising money for the charity A Love Beyond Me.

Be sure to check out A Love Beyond Me’s website at alovebeyondme.org.