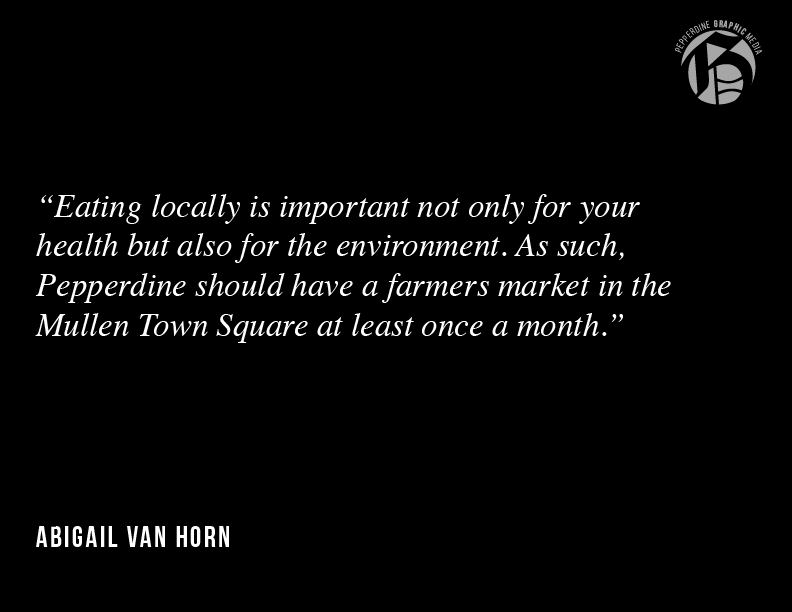 New Year’s resolutions aside, it is never easy to eat healthy, organic and local foods, especially as a student. Yes, there is a farmers market in Malibu, but many students rarely leave campus, either because they don’t have a car or see no reason to as they can fulfill most needs at Pepperdine and thus do not utilize this resource.

Eating locally is important not only for your health but also for the environment. As such, Pepperdine should have a farmers market in the Mullen Town Square at least once a month.

Locally grown foods also tend to be healthier than foods in the grocery store. Kathleen Frith says that “foods grown far away that spend significant time on the road, and therefore have more time to lose nutrients before reaching the marketplace” in her article “Is Local More Nutritious?” published Jan. 1, 2007 by the Harvard School of Public Health.

There is a growing trend throughout college campuses to hold weekly farmers markets for their students and faculties. According to 10 Most Impressive College Farmers Markets published on June 11, 2012 on the Mother Nature Network, the most impressive farmers market belongs to the Kapiolani Community College where the students grow the food themselves. Michigan State University has their own farms that supply the produce served in their cafeteria, according to Students Take Advantage of Farmers Market Boom by Sarah Duis published June 11, 2013 by USA Today.

In all honesty, a Pepperdine farmers market would probably be a bit smaller than those that are mentioned above. That said, Pepperdine could still showcase some of the foods grown on campus in the faculty and staff garden and partner with local farms to provide additional produce.

Pepperdine should embrace the trend set out by so many other prestigious universities by housing a farmers market.