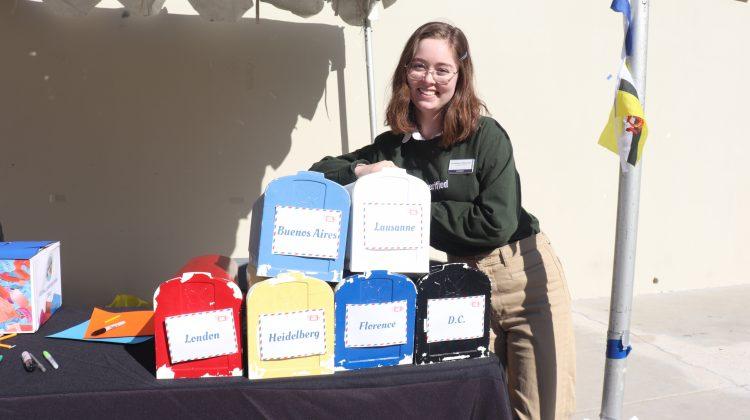 Senior Heidelberg ambassador Lauren Whittington sets up mailboxes for students to send letters to their friends abroad. GLW tabled on Lower Adamson Plaza during the week of Jan. 24-28 to promote international education. Photos by Denver Patterson

The goal of Global Learning Week is to highlight global citizenry and the interconnectedness of the world, said Greg Muger, director of the International Programs Malibu office. Muger has run GLW for the past eight years and partners IP with student organizations to bring global diversity to campus.

Throughout the week of Jan. 24-28, students gathered around main campus for a series of events for Pepperdine’s eighth annual GLW. Muger said he hopes GLW gives students long-lasting tools they need to cultivate a deeper cross-cultural understanding of the world.

“When you look at the mission of the University, we’re trying to equip people to be influential in the world as Pepperdine graduates,” Muger said. “It’s more than just that one class that you have or that one abroad experience you have — it’s being aware of these global mindedness themes throughout your entire college experience.”

Overview of the Week

GLW had six events, each with a high turnout and excitement, GLW intern and senior Emma Polidori said.

Students who stopped by the table Tuesday could send cards to friends in overseas programs and to D.C., with small mailboxes to place the letters into once they were ready to be sent.

The Tuesday evening “Music of the World” event brought in a large crowd, Polidori said. Music from around the world played in Joslyn Plaza and students who guessed the correct country had the chance to win an IP scholarship or a travel backpack.

Junior Paige Fontes won a $500 IP scholarship after participating in GLW activities, she said. When she found out she won, Fontes said she was shocked because she did not know that was the raffle she entered.

“It had all these maps and flags around with a speaker and they were playing music,” Fontes said. “I was walking to the Sandbar [Light House], and the guy in that booth was like, ‘Hey do you want to enter to win a backpack?’”

As an International Business major with a French minor, Fontes said she chose Pepperdine for the study abroad program in Lausanne. Due to COVID-19, however, she was unable to go, so Fontes will not receive the money. Still, Fontes said she appreciates global engagement events such as GLW to bring her closer to what she came to Pepperdine to learn about.

Events like GLW are crucial to bring global issues that normally would not be spoken about on campus, Fenn said.

“I think all of these topics are really important, and I also think we’re not getting enough,” Fenn said. “I think that the pandemic is taking center stage and because we’ve been trying to focus on public health wars, there’s a lot of things that have slipped through the cracks.”

The week closed out with two Friday events — “Doughnut Forget to Apply,” and “International Trivia Night,” put on in partnership with the Board.

On Friday afternoon, IP recreated its Tuesday table on Lower Adamson Plaza, where students were offered doughnuts and filled out cards for friends abroad. The trivia event followed later in the evening, where students gathered in the Light House to play games testing their global knowledge in exchange for small prizes.

For those who were unable to attend the events, students were able to post a photo of a cross-cultural experience on Instagram and tag @PepperdineIP for the opportunity to win the IP scholarship or a travel backpack.

In fall 2014, Muger said he held the first unofficial small GLW before formally introducing it as an IP event in 2016. As the innovator of the week-long, Muger said it is important to him to encourage a wide range of global understanding.

“I started this week along with OISS because there wasn’t something like it, and it was really important to be able to celebrate the global diversity that’s at the University,” Muger said. “And as a study abroad director here, to be able to encourage students to look beyond just their study abroad experience to be able to further their global mindedness — that’s what prompted me to do it.”

For years, Global Fest, a night during GLW in the Waves Café where students have food and drinks from around the world, has been the largest event of the week, Muger said. Two years ago, in early spring 2020, nearly 600 people attended. Due to mask policies, however, Muger said it will be postponed for later in the semester after the Omicron surge slows down.

Muger said he believes global citizenry is crucial to creating a better world. Through GLW, he said those who want to take steps toward this but do not know how can find resources.

“It’s for students that haven’t had, or think that they haven’t had, many cross-cultural experiences — regardless of if they’ve left the borders of the U.S. — to take that next step to come to an event,” Muger said.

Polidori, created, organized and ran every event of this year’s GLW. She said it is important that students have cross-cultural experiences on campus during their time at Pepperdine.

Studying in Shanghai, Polidori said, gave her first-hand experience with other cultures. She is an International Business major and a member of the Global Fellows Program, and Polidori said organizing GLW is the perfect job for her interests and future goals.

“With all my abroad experiences, I’ve been incredibly passionate about international education and cultural exchange and global citizenry as a whole,” Polidori said. “And so that was my intention of wanting to work in IP my senior year in the first place, but then really just creating this event and bringing people together.”