Drink Water to Give More Than Water 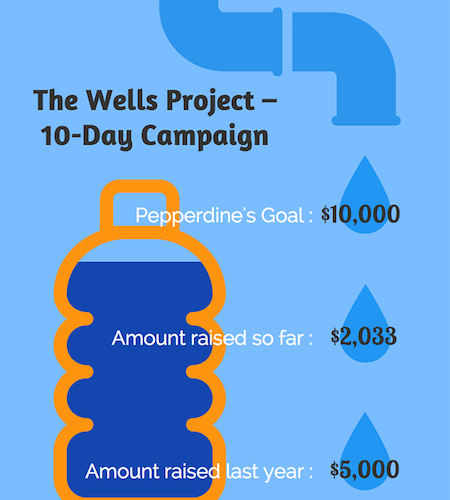 Drinking nothing but water for 10 days?

Pepperdine students who are participating in a special program will find out how difficult it can be this week.

The program is called the Wells Project : 10 Days Campaign. Students who participate are asked to give up drinking anything but water for 10 days and donate the money they would have spent on other drinks to help build a clean-water well in Rwanda. The campaign started Monday and lasts until next Wednesday.

Almost 70 students have committed to the campaign, according to Allison Baumgaurten, president of The Wells Project. Baumgaurten oversees the campaign and organized the kickoff concert on Nov. 5 that aimed to raise awareness of the event. The concert featured musical artists Penny and Sparrow, Sara Davis and Pepperdine student Wilson Howard. About 300 participants came to the concert in the Amphitheater.

The Wells Project is a branch of an organization, Living Water International, according to Baumgarten. Oklahoma State University, Texas A&M and Clemson are some of the colleges across the United States that are participating in the same campaign to help provide clean water to developing countries.

“I am hopeful and excited to see the numbers come in,” she said.

Crocker Cabin, Tri Delta and Pi Beta Phi are some of the 14 teams that are helping to raise money for the campaign.

The theme of The Wells Project is “drink water to give water.” Baumgaurten said it is amazing how our choices can make a change and that people generally spend about $50 over 10 days just on drinks.

Sara Colter said she is participating in the 10 Days Campaign because she thinks that being a follower of Jesus is to serve our brothers and sisters. She said the campaign makes her realize how fortunate we are, and how much we are able to give.

“It’s absurd that we live to such a high standard in this country, but in Rwanda, clean water is still hard to access,” Colter said. “It’s our responsibility to help these people fulfill the most basic of needs and 10 Days is a great way to do that.”

According to their website, about 5,000 people die each day due to dirty water. The Wells Project first began at Texas A&M when three sophomores realized that not everyone has access to clean drinking water. After discovering the concept of the H20 Project, they raised $1,300 dollars and continued to raise money by starting The Wells Project.

Baumgaurten said she enjoys seeing Pepperdine students get excited about helping out and sacrificing something to give to those in need. She said that students are giving them so much more than something to drink.

She said she knows it can be hard to give up coffee and to skip that caffeine fix we all crave, but there are alternatives to get an energy boost and it is for a good cause.

“We can all have coffee withdrawals together,” she said.

Junior and Spiritual Director for the Campaign Mary Swanson said The Wells Project is a great organization with a mission that she supports wholeheartedly: to provide clean water to those without. Swanson said she thinks the hardest part about drinking nothing but water for 10 days will be giving up caffeine during this hectic time of the year.

“But that pales in comparison to what our neighbors in Rwanda have to deal with on a daily basis and that is what will keep me going!” Swanson said.

Elizabeth Lebleu decided to participate in the 10 Days Campaign due to the fact that there are people living without one of the most basic human necessities. Lebleu said she is aware of the notion that water is so abundant and easily accessible.

“It’s simple, it’s easy and it’s powerful knowing that the money I would have spent on other drinks can provide life for a neighbor,” Lebleu said. “We got lucky being able to live here in the United States. Since we have the chance, we should do something about it.”

To create, join a team or donate to the Pepperdine’s 10 Day Campaign, visit www.10days.cc/universities/pepperdine. The last day of the Campaign is Nov. 18. 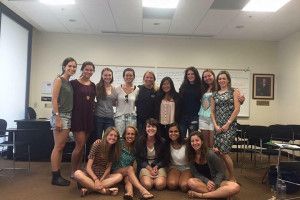