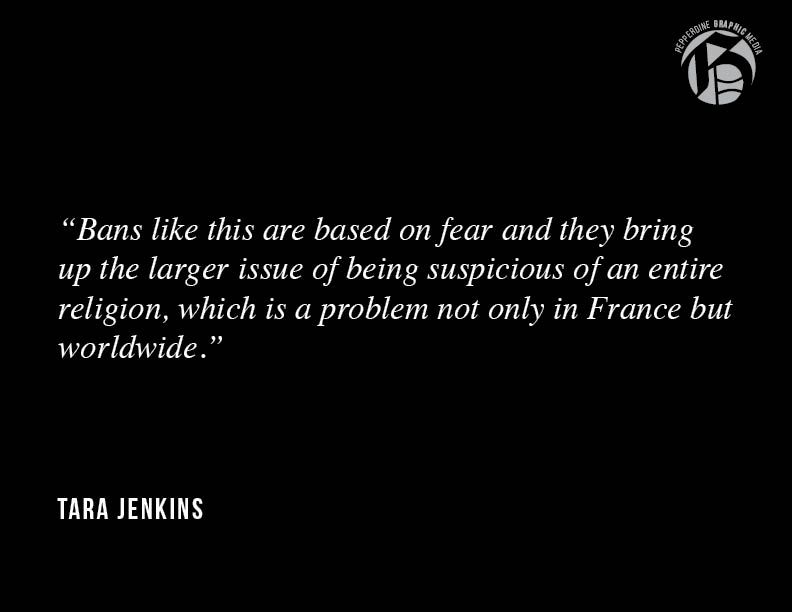 Less than a month after the July terror attack in Nice, France, cities across the south of France started to crack down on what Muslim women are wearing to the beach and in particular. According to a New York Times article “French Court Suspends Burkini Ban” by Jim Bittermann, Sheena McKenzie and Catherine E. Shoichet on Aug. 26, the full body swimsuit that is worn by many Muslim women has been essentially banned from 30 towns across France so far. The swimsuit, which covers all but the eyes, face and feet, is known as the “burkini,” a combination of the words bikini and burqa. This ban is not only intrusive into the rights of women to wear what they want, it is also an example of giving into fear of terrorism.

While the ban does not mention burkinis in particular, it mentions that “beachwear must be respectful of good public manners and the principle of secularism.” However, the law has been used to specifically target Muslim women. According to the BBC article, “France ‘burkini ban’: Images of police on beach fuel debate” published Aug. 24, the Muslim rights group Collective Against Islamophobia has noted that 16 women have already been fined for wearing headscarves, tops and leggings. Violators of the ban are asked to leave the beach and pay a fine of €38, which is equivalent to $42.

Many French officials uphold the ban as promoting “laicite”, or secularism because it is an important component of French government. However, it has also sparked outrage and protests in France and across the world by people who see the swimsuit ban as Islamophobia and an attempt to police women’s bodies after a photo of a police officer making a woman remove her headscarf went viral.

But the bans may not be in place for much longer. According to the New York Times article, “Court Overturns ‘Burkini’ Ban in French Town” by Aurelien Breeden and Lilia Blaise published Aug. 26th, the Council of State on Aug. 26 found that the ban in the town of Villeneuve-Loubet violated civil liberties, which means similar bans in other towns may be overturned as well.

However, even if the bans get overturned, the issue is much bigger than women being fined for going to the beach. The fact that the bans immediately followed the terror attack in Nice show that they were a reaction to the fear of further terrorism. Bans like this are based on fear and they bring up the larger issue of being suspicious of an entire religion, which is a problem not only in France but worldwide.

This same fear is rising in the United States as well. Republican Presidential candidate Donald Trump has vowed to stop immigration “from any nation that has been compromised by terrorism,” which means countries that are primarily Islamic. Whether the ban is on swimsuits or immigration, restrictions affecting followers of Islam are harmful not only to their freedom but everyone’s as a whole.