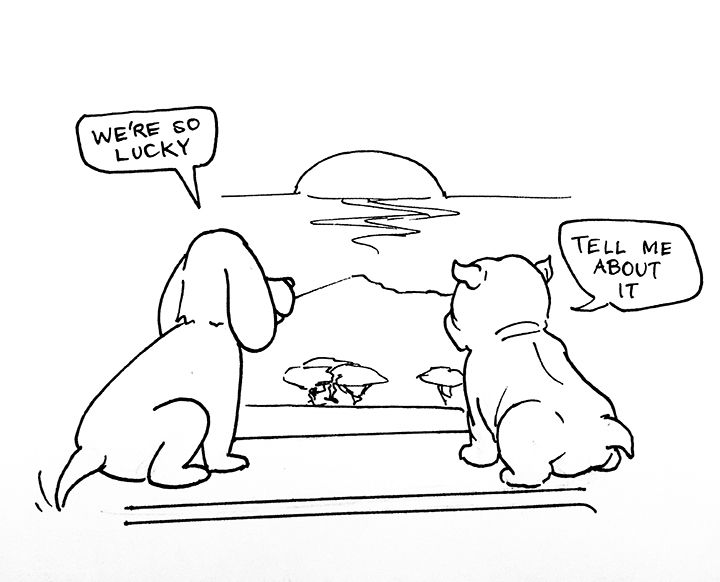 We’re not sure if anyone else has noticed, but there seems to be significantly more dogs on campus recently, and we could hardly be more excited about it. Big dogs, little dogs, fluffy dogs — basically all dogs (except rat dogs because they’re more closely related to rodents than dogs. And they yap).

Walking to class is a bore, running around the track is tedious and walking alone on the beach is sadder than trying to open Chick-fil-A’s doors on a Sunday.

But imagine yourself walking to class with a golden retriever in tow, wagging his happy tail and lolling his tongue about. Maybe you take your greyhound for a run, and try to outrun her. A walk on the beach doesn’t seem so lonely with man’s best friend, does it?

Dogs have an amazing ability to boost happiness and decrease loneliness, according to an article by Jennifer Welsh for Live Science called “Puppy Love: Pet Owners Are Happier, Healthier” published July 11, 2011. Who could question allowing dogs on campus? It must happen.

The website College Xpress has a list of Schools Allowing Pets on Campus. Many schools allow fish or cats, but Pepperdine could be among the first to be a completely dog-friendly campus. We will go down in history as having the ‘most intelligent, friendly and stress-free students in the world.

Research has repeatedly shown that dogs are amazing creatures who connect with humans in profound and innumerable ways.

Having a dog around can help improve and prevent many physical, mental and emotional problems, which is why students with certain disabilities may bring dogs on campus with permission from the Disability Services Office, according to the Student Handbook.

But we think it would be beneficial if all students were allowed to bring dogs on campus. For one, having a dog makes it necessary to exercise regularly, which would be a helpful motivator for many otherwise sedentary students. Since everyone loves dogs, it will also make it much easier to meet new people and build connections. For some students, this could be the first time they’re having to care for another creature, which will prepare them for the real world — balancing work, relaxation and taking care of other creatures.

Of course, there are some issues to think about, but we’ve already taken care of them. In fact, we think this is so foolproof that we will give the school permission to copy and paste this directly into the Student Handbook (with attribution to the Graphic staff, of course).

Why in the world are students who don’t like dogs being admitted into Pepperdine? Kick them out of school, replace them with sane people. Easy. Done.

2) What about students who are allergic to dogs?

Like smoking, there could easily be a little checkbox on housing applications for whether or not you could live with a dog. As long as a student can bear having dogs around campus and in their classrooms, we will allow the student to attend Pepperdine and live in a fur-free dorm.

4) What about potential problems between dogs or between a dog and a human?

Before being allowed on campus each semester, a student and his or her dog would have to pass an obedience and behavior test. For the human, this would include: ability to control the dog, proper procedure in case of an emergency, dog owner etiquette and evidence of responsibility (including a medical check-up of the dog). For the dog, this would include: basic commands, potty training, socializing with other dogs and reactions to unexpected human behavior.

A pair with anything but a perfect score would not be allowed on campus. We take dogs seriously, but we take safety seriously, too.

5) What about space and dog waste?

Not everyone will have a dog, of course. Some students won’t want to take care of a dog, and some students won’t pass the test. With only some students who actually have dogs, there should be plenty of space in classrooms, and in shared dorm rooms, the owners would be responsible for keeping their dog’s bed and other items on their side.

There is plenty of non-landscaped land near most of the dorms where students can take their canines to do their business, and they would be responsible for cleaning it up immediately and throwing it away directly in a dumpster. Infractions of this or any other rule could lead to loss of dog ownership privileges.

Nothing but good could come from having dogs on campus. Dogs are incredible, beautiful creatures and students and faculty alike would greatly benefit from a few furry friends.