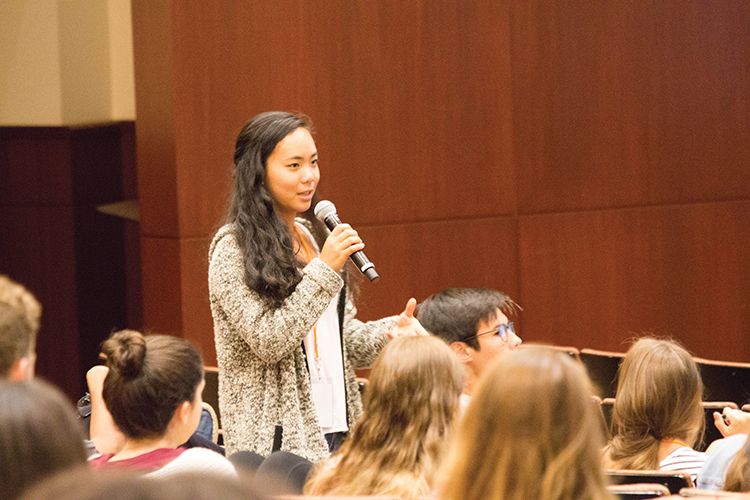 Students from Pepperdine, Vanguard, Biola and Westmont universities and speakers from ReNew Partnerships gathered Saturday for The Summit on Diversity and Inclusion in Elkins Auditorium. ReNew Partnerships is an organization based out of Ohio whose purpose is to “foster ethnic unity in the body of Christ” to discuss cross-cultural relations.

“I love to do this, especially with college students, because I believe that they are the answer,” said Chad Brennan, founder of ReNew Partnerships. “I believe they, as God leads them to make change, I think these incredibly difficult issues that plague our campuses and our society, people just like the people in this room can make a difference – a huge difference.”

The morning of the Summit kicked off with a check-in, followed by a continental breakfast outside of Elkins on Seaver campus. Students were then welcomed inside the auditorium for the first of four sessions, the first being “God’s Plan to Ethnic Relationships.” That session was kickstarted by Michaela Gregory, the second speaker from ReNew Partnerships.

Gregory started off the event with an impassioned prayer and put her phone number on the powerpoint so that students could text in questions while she and Brennan spoke.

Junior Cayley Olivier said she was most excited to hear about God’s plan in ethnic relationships because it’s a large part of modern culture and generation.

Session Two was “Realities of Race in the U.S.,” followed by Session Three, which was: “Relationships: Insider/Outsider Principles.” Session 4 was “Cultural Differences” and the final piece of the Conference was left for a Q & A.

Vice President of Student Life and Dean of Student Affairs Mark Davis said Pepperdine was invited to host the event with Renew Partnerships because the University has been attending conferences similar to this at other colleges over the years.

“We wanted to bring it here to Pepperdine to now serve as the host to bring students from other campuses to come here to just continue this important ongoing conversation and to make it more accessible to more students here at Pepperdine,” Davis said.

Davis shared after Session One that his favorite part of the Summit thus far was their emphasis on teamwork.

“If you break that word down into the two parts – team, I feel like it’s important that every voice on our campus from every different background is important to join in together,” Davis said. “And second, it is work. It’s hard work. It’s uncomfortable at times, but we’ve got to be willing to all of us come together as a team to help build community that is both diverse and inclusive.”

Brennan is from Columbus, Ohio and began ReNew Partnerships 11 years ago with his wife, with the “focus of cross-cultural teamwork in Christian communities.”

Brennan said this event is relevant in today’s society in light of what’s going on in the world with race relations, specifically with Black Lives Matter. He said he believes sometimes it is a topic that is underdeveloped at Christian universities and he “loves the opportunity to have a conversation like this” because he “feels that students are hungry for it.”

Davis said that an important part of this event is that it is a conversation with the broader community because it’s a part of a national conversation.

“I think it’s so important that if we really want to create spaces of reconciliation, places where we have this biblically reconciled intercultural Christian community, that we have to overcome the individualistic approaches and the silo approaches to the work towards creating spaces where chameleons exist and where collaboration and community manifest,” said associate dean of Student Affairs for Diversity and Inclusion David Humphrey.

Lashonda Coleman, associate dean of Student Affairs and Title IX coordinator for students, said she appreciates the integration of faith into this conversation because she thinks God’s will in the sphere of diversity and inclusion is important.

“Even when there’s injury in having this conversation, we connect back to God’s will and in that we can do all things,” Coleman said. “We can have the difficult conversations, and we can recognize where there’s privilege and power in sharing in that.”

Coleman said she really enjoyed the piece about “acknowledging one’s privilege and being intentional about handing that over to those who may have less power.” She made a point to not leave those who are underrepresented to ask for it, but instead to recognize that as a white person, or a male that may have more power than a minority group, they have the opportunity to be intentional in giving those without that power a voice.

“I believe relationships are going to be the catalyst – the mechanism – that is going to bring us to be more inclusive in our work here on campus around diversity, around inclusion,” Coleman said when asked what she thinks is most important about this event. “Relationship creates trust and safety, and affords honesty even around the difficult parts of this conversation.”

“It’s so important that we all become comfortable with the uncomfortable in these types of spaces, where we’re able to interrogate, and discuss, and explore the different types of power differentials and the different types of issues that impact the work of diversity and inclusion,” Humphrey said. “This will provide us and equip us with ambassadors in every area and facet of our institution that are able to engage in these uncomfortable and courageous conversations.”

“With Pepperdine’s history of diversity issues, I think its really awesome that people are taking an initiative to address issues in our community and I think this is a great way to come about it in a really productive manner,” Olivier said.

Davis said the recent protests around Pepperdine’s campus regarding race did not solely contribute to this event being hosted because Pepperdine has been attending events similar to this on other Christian campuses for years. He did share, however, that recent protests highlight how important the Diversity and Inclusion Summit is.

“In order for us to address different examples on our own campus of racism, of the things that the protest are bringing to light, this kind of training we are getting today helps equip us to be able to address that in a way that is productive and helps move us forward rather than further dividing us over any particular topic,” Davis said.

Coleman shared the importance of taking notice that administrators attended the event.

“It’s a student summit,” Coleman said. “But I appreciate the faculty, staff, administrators that are here to show that it’s not a student issue, but it’s an institutional issue and all of our hands are in this and it takes for all of our hands to be in this to really make it teamwork because the issues affect all of us whether administrators or students, faculty, staff. We’re a community.”