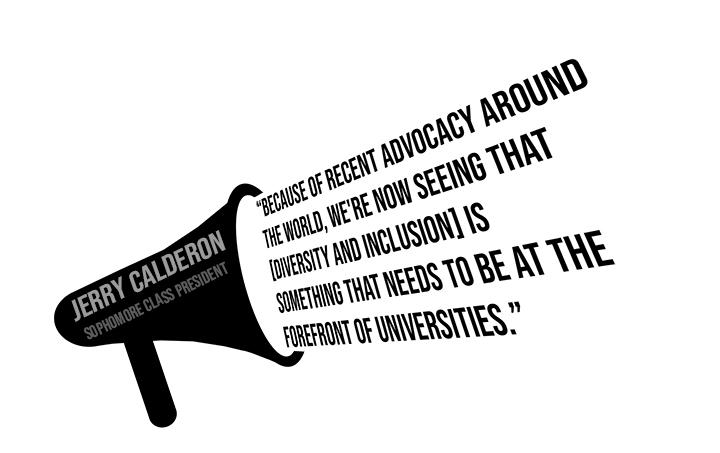 The Student Government Association (SGA) gives Pepperdine students who are passionate about diversity and inclusion a louder voice through the Diversity and Inclusion Committee.

The committee, led by SGA Director of Diversity and Inclusion Christian Abad, came together at their first meeting of the semester Wednesday, Jan. 29, to discuss ways to foster a more inclusive environment for everyone at Pepperdine.

Abad said there are about nine people on the committee, including international students, members of Latino Students Association (LSA), SGA Vice President of Administration Natalia Escobedo, Sophomore Class President Jerry Calderon and others.

Calderon said he chaired the committee 2018-2019 school year during its first year of existence in SGA. The committee allows students an easier way to bring up issues of diversity and inclusion.

“[The committee] gives people the platform, an easy kind of highway to travel and get their ideas out in the open and really work hand in hand with the institution itself to make critical change,” Calderon said.

He said he thinks it is important to have a Diversity and Inclusion Committee because diversity and inclusion has not always been a priority at universities.

While chair of the committee, Calderon focused on passing a resolution to put a new mural in the Waves Cafe that celebrated indigenous people, unlike the previous mural that was taken down in response to on-campus protests in 2016.

“Together, my committee and I thought it was a great idea to have a new mural put in the Caf [to] celebrate indigenous people, especially because Pepperdine is on indigenous land; it’s on the Chumash land,” Calderon said. “[The resolution] was passed unanimously.”

Abad said there are a couple issues he wants the committee to focus on such as accessibility and mental health.

“We definitely want to implement more with President Gash or administration, definitely for people with disabilities,” Abad said. “I think just being able to work with either Student Accessibility or Counseling Center and tell them, like, ‘How do we advertise you more to the students?'”

Another major initiative Abad hopes to start is a Certificate of Intergroup Dialogue program, which teaches how to approach and have difficult discussions about divisive topics like race, gun control or police brutality and also help teach others on how to navigate those conversations.

“[The certificate program] was one way for me to understand the student perspective and to actually create dialogue and create discussion, not conflict,” Abad said.

Abad said he received his Certificate in Intergroup Dialogue last year with the help of David Humphrey, who was the associate dean of Student Affairs for Diversity and Inclusion in 2019 and implemented the program. He said the program helped him personally, and he hopes to offer it to students again in the future.

Sophomores Melissa Mejia and Isabella Mendoza are members of both LSA and the Diversity and Inclusion Committee, and they are working on forming a Latina sorority at Pepperdine.

Mejia said she and Mendoza wanted to join the committee to help create a more embracing and multicultural campus.

“We just felt like there was some lack of diversity here, mainly for Hispanic students,” Mejia said. “We want to definitely see more change on that, so that’s why we joined it.”

Mendoza said she thinks diversity is an essential part of the college experience because it provides a unique opportunity to meet and get to know people with different backgrounds and perspectives.

“[College is] also a time when you form your opinions, and I think being able to see through other people’s perspectives is important, and I think diversity leads to that,” Mendoza said.

Mendoza said she wishes Pepperdine was more inviting toward minority students because of all the resources it offers.

“I think Pepperdine could be so amazing to so many people’s professional and academic journeys,” Mendoza said. “I just wish that it was a place that felt more welcoming toward those minorities just so that they could get those same opportunities.”

Mendoza said a diverse and inclusive environment is not only important to students in minority groups but also to Pepperdine as a whole.

Calderon said he hopes that the committee will have a major impact on campus and bring positive change to Pepperdine, especially because it brings together the power of students and administration.

“Our clubs could only do so much, and right now they’re doing everything that they can, but at some point, it needs to hit the administration level,” Calderon said. “And that’s where I think the beauty of this committee lies and the impact that it could have.”

Calderon said if students have an interest in the Diversity and Inclusion Committee, they can always reach out.

“If there’s something that you’re passionate about and really want to pioneer at the university in being culturally aware, inclusive […] serve on the committee or offer your ideas to the committee, so we can make Pepperdine a better place,” Calderon said.