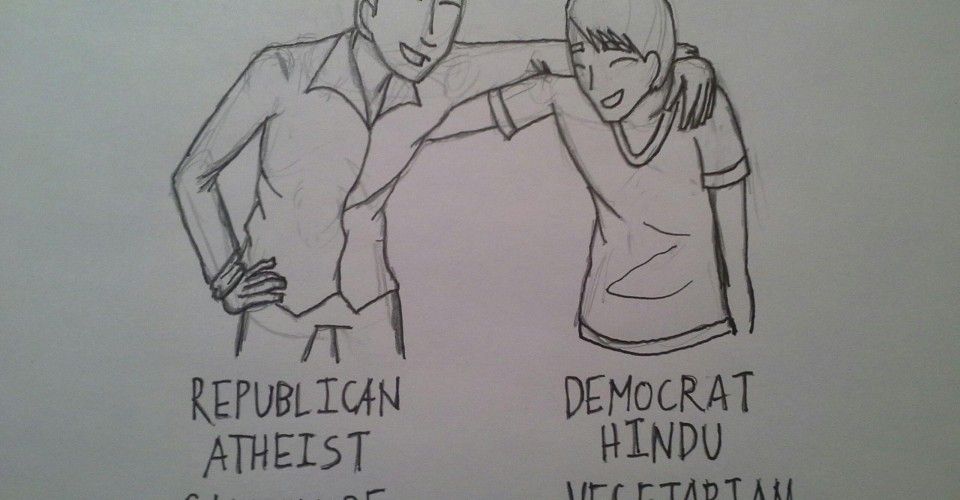 Take a quick moment to look around the people you’ve surrounded yourself with, your closest friends. Are they all or for the most part a certain religion? Ethnicity? Political leaning? I know that by and large, mine are, and it’s likely that it’s true for you too.

So, friends. Maybe it’s time to diversify them?

Now this isn’t to say that it’s time to immediately go out and try to become friends with just anybody who fundamentally disagrees with you. An important element that needs to be brought in is respect. “Either there is mutual respect, or the conversation is over,” is what Lebanese TV host Rima Karaki famously said in an interview with a Muslim scholar in 2015. Respect is and should be one of the core foundations for any sort of friendship or interaction in general for that matter. Without respect, a friendship cannot be built, and without respect, there won’t be an effort to try.

When it comes to respecting people you disagree with, it often comes in the form of separating the person from those specific beliefs, at least for that time. Getting to know and understand someone outside of differing political or religious beliefs is important because it ensures that we don’t see people as the caricatures they’re often made to be.

Conservatives aren’t all anti-gay gun toters, and liberals aren’t all baby-killing tree huggers. It’s important to sit down with someone you don’t agree with and talk to them, to get to understand them and see them as people, and not just as their beliefs, as discussed by Elizabeth Lesser during her TedTalk, “Take ‘the Other’ to Lunch.”

It’s also important to have friends who disagree with you because it deters the echo chamber effect from happening. The echo chamber effect is essentially what it sounds like: People stating an opinion that is repeated and amplified, growing in its extremism because there’s not someone with a different opinion to temper it.

Having friends with different beliefs helps you to humanize others like them. It shows you that yes, that girl may be Hindu and you may be Christian, but more important than that is the fact that she understands your jokes better than anybody else, and is the best person to call when you want to watch a sappy movie. People’s beliefs are a part of them, but are not wholly them.

A great example that’s often brought up is the friendship between the late Supreme Court Justice Antonin Scalia and Justice Ruth Bader Ginsburg: Two people from complete opposite sides of the political spectrum who challenged each other to be better and cared for each other with mutual respect and understanding.

When they argued, they argued in good spirit, according to an NPR article titled “Ginsburg and Scalia: Best Buddies” published on Feb. 16, 2016. They argued understanding that the other person’s political beliefs did not define them as a person; they argued against the opinion and not the person. Upon Scalia’s death, Ginsburg wrote, “We disagreed now and then, but when I wrote for the Court and received a Scalia dissent, the opinion ultimately released was notably better than my initial circulation … It was my great good fortune to have known him as working colleague and treasured friend.” Maybe that’s a view we should start to take as well.