Stargazing in Los Angeles? Forget about it.

The glowing stars remain present, albeit hidden in pollutants from radiance, or emitted light, known as light pollution. Light pollution has dire effects on the ecology of a location, especially on the coast and in the mountains, because migratory and nocturnal animals can have difficulty hunting or traveling, Professor of Religion Chris Doran said.

To combat the ecologically damaging phenomenon prevalent in the LA area, the City of Malibu implemented the Dark Sky Ordinance in October 2018, restricting the types, temperatures and lumens of outdoor lighting.

“We want to provide this public benefit [and] help preserve the visibility of the night sky,” Center for Sustainability Director Ricky Eldridge said. “A lot of people enjoy the beautiful views in Malibu, and we want to facilitate that by taking advantage of the state-of-the-art technology that is available in terms of lighting.”

To be considerate of the neighbors, despite its freedom from the restrictions of the light ordinance, unincorporated Pepperdine University joined forces with Malibu, LA County and the California Coastal Commission in May 2011 and committed to replacing all of its 367, non-historical globe lights — found at such places like the Firestone Fieldhouse parking lot and along the lower half of Seaver Drive — on campus with dark-sky adhering lighting, said Eldridge.

In terms of VIIRS, a measure of radiance, Los Angeles shines bright. The center of the city produces an outstanding amount, chalking up 167.75 SI radiance unites that easily exceeds the VIIRS zero to extreme scale of 0.00-75.00, according to lightpollutionmap.info. 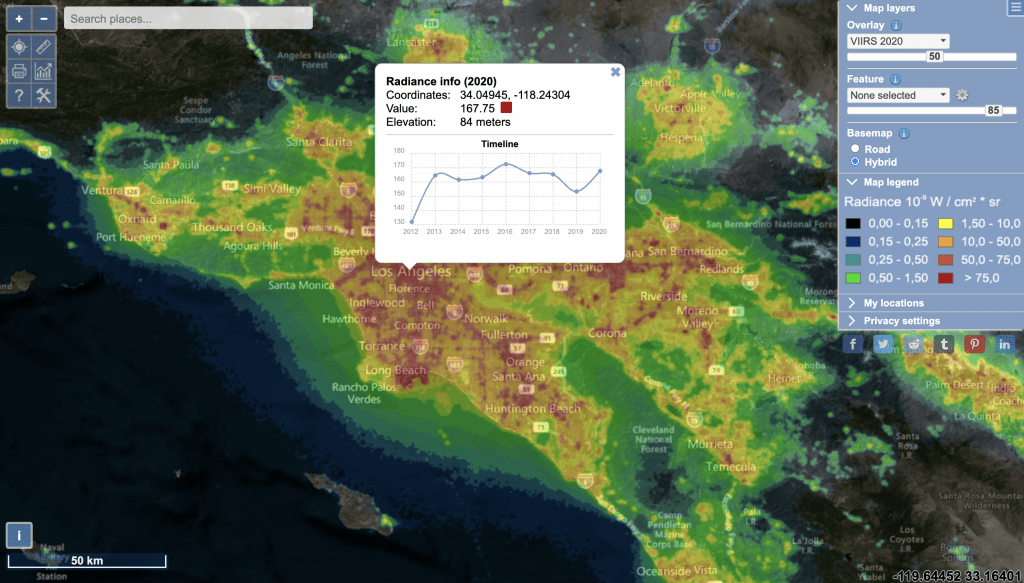 “There’s a whole ripple effect of ecological consequences,” Doran said. “While it’s often just seen as like, ‘Oh it’s just rich people who want to see the stars,’ it’s not. It’s a little bit more complex than that and more important ecologically when you think about the nocturnal animals — the coyotes and raccoons, […] owls, other birds, especially, that live in the mountains around here.”

Dating back to 2013, the Malibu City Council — driven by community member Winikoff and Councilmember Steve Uhring, alongside the International Dark-Sky Association — established an ordinance for outdoor lighting.

Eldridge said the University began replacing lights in 2015, with 110 of the 367 substituted. The lighting replacement will conclude with the completion of the Campus Life Project’s buildout and a related project, effectively reducing the University’s sky glow by 50%.

“These globe lights were specifically targeted […] because those are the types of light that contribute the most to sky glow,” Eldridge said. “Once all of them are replaced, the University will have reduced that type of light most likely to contribute.”

The new lights are “significantly more energy-efficient,” than the globe lights, Eldridge said, but he is unsure of the cost difference.

The ordinance lays out the types of lighting required in non-residential and commercial areas. All outdoor lighting must be shielded, downward-facing and not exceed 850 lumens and 3,000 Kelvin, according to the City of Malibu website.

Winikoff said the best light temperature for outdoor lights has no white or blue spectrum and high-intensity light, but they instead use yellowish, amber-toned lights that do not exceed 3,000 Kelvin.


As an educator, Doran said he thinks the University fails to educate students about its environmental goals, such as the Malibu Dark Sky project, and the majority outside of the biology program is unaware of the drastic effects light pollution has on the surrounding ecology.

Scottie Sandlin, senior and Green Team president, said she had heard of the dark sky project — but not the one in Malibu. Sandlin was familiar with dark sky mandates from her time spent on the Georgia coast, which the communities implemented when scientists learned light shining toward the ocean caused sea turtles to get lost.

On campus, Sandlin said she tries to be vocal about her light pollution advocacy. In a town hall meeting about the renovations in the Sandbar, Sandlin proposed better utilizing the natural light and window space instead of wholly depending on light bulbs.

While more sustainable lighting has come to campus, Doran said he weighed the options of the University building equitable, modified stadium lights for the outdoor baseball and soccer fields. Doran said the Waves could then host nighttime NCAA events, bringing in TV revenue that helps pay off the modified lights.

“We should stay dark at night, and not just because we’re a bunch of wealthy folks that can turn the lights off and face them downwards, but to kind of understand what it means to be a good neighbor,” Doran said.