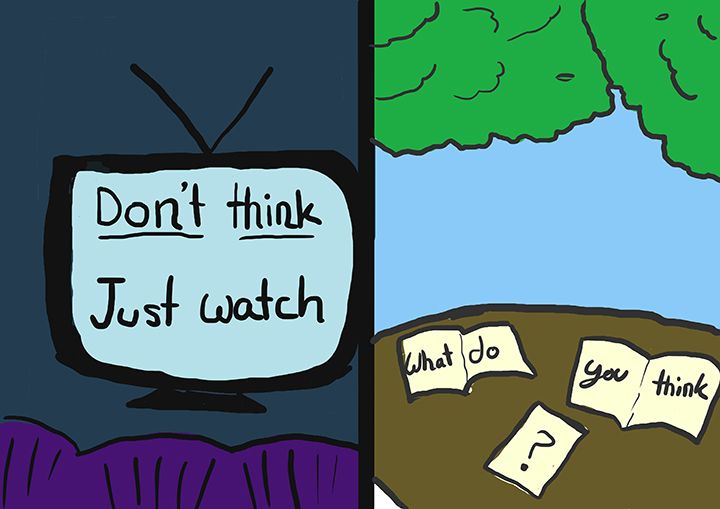 As a child, I was fortunate to have my mother read to me each night. From C.S. Lewis to E.B. White, I learned to love stories and began to read voraciously. Instead of going to bed at night, I would spend hours trying to finish books I had just received that day.

These days it’s hard to find a spare moment to crack open a book that’s not for school, and it’s especially difficult in lieu of digital distractions that are easy to get lost in. What happened to those days when I read so often, when the night hours freed me to read? Growing up seems to have changed what I desire in my days, but I don’t think that’s a good thing.

My plight isn’t an isolated event; in fact, the amount of people who read frequently has declined in America, according to Alison Flood in her Feb. 9 article, “Sharp decline in children reading for pleasure, survey finds” for The Guardian. This includes parents who are reading less to their children and children who read less for pleasure.

An increasing amount of Americans claim not to have read any books in the last decade or so, according to an article by Jordan Weissmann called, “The Decline of the American Book Lover,” for The Atlantic on Jan. 21, 2014. The article’s first graphic shows that in 2014, the percentage of Americans who did not read a single book was 23 percent. This is only made possible by the digital society we live in, where all the important information we need can be found right in our pockets. Weissmann does note, however, that the decline has since leveled off and possibly will stop declining because last year was the first in decades not to have a decline.

Our reading and comprehension skills are adapting to the digital age, according to Michael S. Rosenwald in his April 6, 2014 article, “Serious reading takes a hit from online scanning and skimming, researchers say,” for the Washington Post. He quotes Andrew Dillon, a professor from the University of Texas who studies reading: “We’re spending so much time touching, pushing, linking, scroll­ing and jumping through text that when we sit down with a novel, your daily habits of jumping, clicking, linking are just ingrained in you.” These habits of constantly being engaged on our phones are taking a toll on our ability to read comprehensively. One becomes used to the quick sentences, the 140-character messages, and anything longer is difficult to read and understand.

In this sense, we are reversing the way we have trained our minds to read word by word, sentence by sentence. Sounds bites are now the literal currency our minds understand.

Research done by Rakefet Ackerman and Tirza Lauterman for the Elsevier Journal in 2012 tested comprehension using a time-test. Some engineering students from a nearby school were given an article to study for a certain amount of time and then take a test on it. Some studied on a screen and some studied a printed version of the article. The individuals studying the printed version of the test performed much better than the ones who studied the online article. Thus, a correlation exists between understanding something better and studying that subject tangibly.

This leads one to believe that reading over time can increase cognitive abilities, as published on July 24, 2014 in a study done by Stuart J. Ritchie, Timothy C. Bates and Robert Plomin. They found the following: “Early remediation of reading problems might not only aid in the growth of literacy, but may also improve more general cognitive abilities that are of critical importance across the life span.” These abilities include comprehension, literacy and one’s ability to put the mind to work.

The move to a digitalized society is one that culture supports, and at Pepperdine, this remains true. Teachers are encouraged to find ways to do things digitally, rather than to use reams upon reams of paper. This, in effect, saves money and time for teachers and students alike. In light of these findings, however, it’s easy to see how students are skimming, rather than reading, or would rather use an online summary. It’s just easier.

Although some may not see the ultimate cognitive consequences for our move to a digital world, it’s apparent that some of those consequences include a dependency on short, quick information and a diminished ability to appreciate novels or topics of interest. As future leaders, parents and members of the world community, it’s important to perpetuate a culture of deep perceptions so our world doesn’t turn into a shallow, fad-following place that no longer appreciates the written word or how a good book smells when you crack it open.