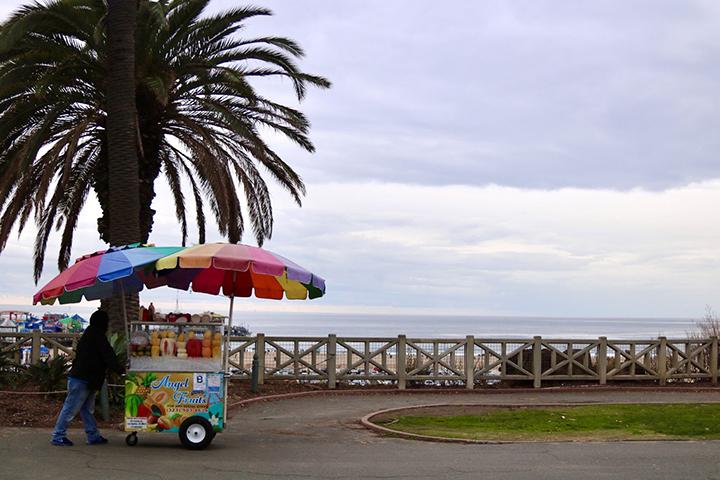 A street vendor pushes a cart with a health department sticker near Santa Monica State Beach. Photo by Anastassia Kostin

On any given day, Angelenos are presented with an array of food options on the street, on the sides of canyon roads and along beach boardwalks. The street vendors of Los Angeles are a community of entrepreneurs selling everything from churros and Tajin-sprinkled fruit to street tacos and hot dogs. Their mobile food carts go by different names — Tacos Sin Karma, La Esperanza, Hijo De Su Madre — but many of the vendors are bound by their low-income immigrant statuses as they survive on informal livelihoods.

Just a year and a half ago, illegal street vending meant street vendors ran the risk of getting citations, fines and even misdemeanors. Street vendors, who according to the Los Angeles Public Counsel office are made up of approximately 80 percent women, work in the shadows to make ends meet. Their resiliency and work ethic ultimately paid off — not only was street vending a $504-million industry in Los Angeles alone in 2015, according to Economic Roundtable, but the city finally decided to make vending laws more lax in an effort to protect its immigrant population.

In September 2018, Gov. Jerry Brown signed Senate Bill SB 946, also known as the Safe Sidewalk Vending Act, to decriminalize street vending. The law went into effect January of this year. Before SB 946, there was no state legislation on sidewalk vending, meaning every local city or county created their own system for vending.

As a result, almost all cities in California criminalized and prohibited vending, said Doug Smith, supervising staff attorney at the Public Counsel.

For example, Los Angeles, Malibu and Glendale all had their own separate ordinances, but most di not allow sidewalk vending at all.

“And [city governments said] if you do vend, we’re going to charge you . . . in some cases with a misdemeanor criminal penalty,” Smith said. “That was sort of the situation that motivated the state to come in.”

Now that SB 946 is in place, it restricts how local cities will adopt their ordinances. The bill essentially has three pillars. First, cities in California can no longer charge vendors with criminal penalties for violating local vending rules. Second, the law creates retroactive release provisions, a system where vendors with current pending charges or prior convictions related to street vending can go through a process to have them dismissed and cleared from their record.

The decriminalization aspect of the bill is especially important from an immigrant’s rights perspective, especially for vendors who want to have access to housing, other employment, loans or schooling, Smith said.

“Being charged with and prosecuted with misdemeanors has an enormous effect on immigration and citizenship status, and we were seeing vendors who were being prevented from accessing citizenship programs and in some cases actually, you know, at risk of being deported because they were cited for sidewalk vending,” Smith said.

The third pillar of SB 946 is local cities and counties now have to abide by certain standards if they are going to impose rules on sidewalks. This is intended to strike a balance between allowing cities some flexibility in writing the rules that are unique to local dynamics while making sure that any regulations the city creates are based on objective health, safety and welfare concerns, Smith said.

Even though street vending is no longer a crime in California, some jurisdictions are trying to evade the state decriminalization law by employing criminal enforcement against vendors using other code sections for the same activity, Rogers wrote.

“We have also seen complaints about sanitation workers engaging in unlawful harassment or confiscation of street vendor property,” Rogers wrote.

As street vendors, a largely Spanish-speaking population, continue to face threats to their livelihoods, they must also learn to navigate the new permit process. Groups that work with street vendors conduct trainings primarily in Spanish, and flyers and pamphlets are in both English and Spanish — with more languages necessary for the Los Angeles community to come, Smith said.

“It’s really important to be multilingual with this to try to make sure that we’re reaching as much of the vendor population as we can,” Smith said.

A sidewalk vending permit is not required by SB 946, leaving the decision up to each city. Since the City of Los Angeles decided to require vending permits, street vendors have to abide by legal requirements that apply to all businesses involved in the sale of goods and apply to get a state seller’s permit.

In addition to any local permits for vending, any vendors that sell food, including restaurants and “mobile food facilities,” need to get a health department permit from the LA County Department of Public Health. This means vendors need to have their equipment inspected and certified by the County to demonstrate that they’re going to meet certain state law food safety requirements, Smith said.

While it is important that vending happens in a way that ensures public health and public safety, challenges remain because of the fact that street vending has been illegal in most of California for so long.

To meet the county health requirements, a street vendor needs to buy new equipment from a manufacturer that can, depending on what they’re selling, cost upward of $10,000, Smith said.

“It’s a really big challenge for very-low-income vendors who are just starting out, and to me, that’s the thing that that my colleagues and I are most worried about,” Smith said. “We’re having a bunch of meetings with the County Department of Public Health to try to think about solutions … to lower the cost for vendors.” On top of navigating the permit process itself and the financial challenges that come with upgrading equipment, there are the fees for the permits themselves.

This year, street vendors — some of whom were not provided translation services — and community organizations fought for lower permitting fees ranging from $50 to $200 at committee hearings with the Los Angeles City Council, according to Curbed LA. Their efforts were in vain. In Nov. 2019, the Los Angeles City Council specified that a vendor permit fee will cost $291 until July 1, 2020 and will increase to $541 after July 1, 2020.

“I think that $541 is too expensive,” Smith said. “This is an economy that’s been informal for so many years, so the idea of formalizing is kind of this fragile moment, right, where you want to make sure that we are inclusive as possible and eliminating barriers so that people come in and formalize their business. Eventually it’ll start to … have a rhythm, but in the very beginning, I think it’s really important to lower those costs.” Public Counsel is working with the city council office to adopt a program where if a vendor can demonstrate that they’re low income, then the fee amount would be reduced to somewhere between $50 to $200 a year for the city permit.

As the regulations surrounding street vending vary city by city and the LA Street Vendor Campaign continues to advocate for the 50,000 micro-entrepreneurs of Los Angeles, the year 2020 will be crucial in mitigating some of the risks posed by the default $541 annual fee.

The subject of street vending remains touchy, and multiple street vendors declined to comment on how they personally navigate the permit process.

The hope is that with time, not only are street vendors able to sell food without getting discouraged by harassment or the daunting financial costs, but also that they feel included in Los Angeles’ multicultural economy. Angelenos can support registered street vendors by locating them on Street Food Finder or by simply finding them around the tourist areas of Los Angeles.