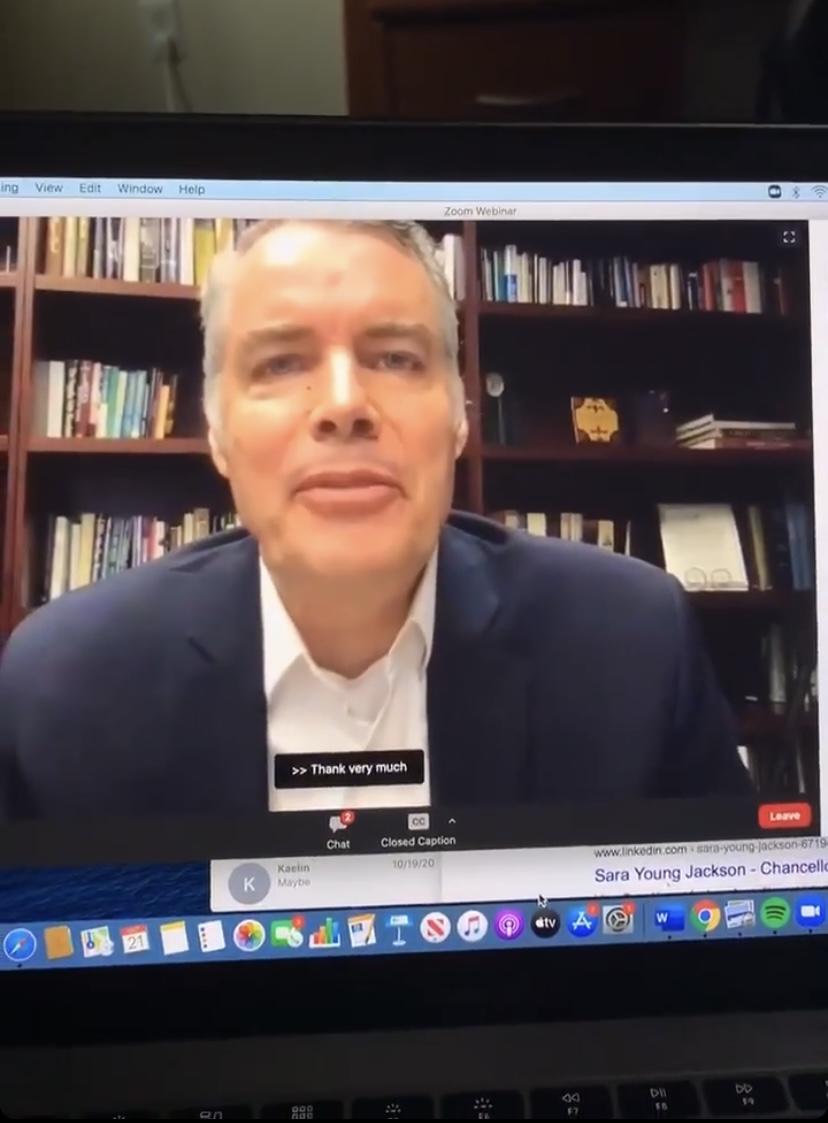 On Oct. 12, the School of Public Policy, in association with political fundraising campaign organizer Active Engagements, shared a petition with Conservative News subscribers against the use of “far left indoctrinating” curriculum in schools. On Oct. 21, SPP Dean Pete Peterson told Pepperdine community members it was a mistake to send the petition without prior authorization.

The Pepperdine community exploded with reactions following the Graphic’s Oct. 14 publication of Peterson’s petition, with two alumni petitions, a dozen letters from the Seaver community and hundreds of Instagram comments and tweets created within the week. Peterson and President Jim Gash addressed the community during the Oct. 21 President’s Briefing.

“I believe in civil discourse, inclusive engagement and viewpoint diversity,” Peterson said. “And unfortunately, this email promoted none of these.”

Peterson started his address by referencing his public image as modeled through his 15-year career at Pepperdine and his various other public roles, including leading a nonprofit, building the Davenport Institute for Public Engagement and campaigning for public office, among other speeches, opinion pieces and media appearances. Peterson said he strives to model several commitments including viewpoint diversity, civic participation and civil discourse.

Peterson then addressed the email campaign, which he said abandoned the principles he holds in public addresses.

“While the emails were written by copywriters that I contracted outside agency — and while I hadn’t consented to have my own image used an email, nor seen the final email — I approved the copy for this first round of a pilot program, and this was a mistake,” Peterson said. “The email tactic used polarizing and crass language completely unbecoming of SPP, of Pepperdine and of me.”

Peterson said he believes he has demonstrated over the years the ways he speaks, writes and thinks and he said this email did not model his standards.

“I have no excuse,” Peterson said. “It was a decision I deeply regret and a serious error in judgment.”

As confirmed by an Oct. 15 email from Provost Rick Marrs to the Graphic, Peterson reaffirmed the email campaign is canceled and the contract between the School of Public Policy and Active Engagements has ended, per University demand.

“I can say without hesitation that no message like this will ever again go out from my office, and I take full responsibility for it,” Peterson said.

Peterson also discussed the controversy in the Pepperdine community surrounding the topic and said he regrets this issue created division in the community. While individuals may disagree with one another, Peterson said he believes Pepperdine must always model a culture of honor in how they disagree.

“On this point in this email, I have fallen short,” Peterson said. “To those who have been hurt by my bad judgment, I offer my unreserved and complete and heartfelt apology.”

After Peterson spoke to the community, Gash reaffirmed Pepperdine’s commitment to civil discourse and debate.

“Our university seeks to be a place that welcomes diverse points of view and invites respectful and productive dialogue about controversial topics in a Christian environment,” Gash said. “This university will always support academic freedom and freedom of speech, including the freedom to engage in political discourse.”

“The email Dean Peterson was speaking of was an unauthorized solicitation that expressed partisan political views, along with divisive commentary, with a specific call to political action, all as if it were on behalf of the institution,” Gash said.

Gash echoed that the University administration did not approve the email and petition nor would it have done so, as Pepperdine has set precedence to not make political statements in order to create a space for civil discourse.

“The institution itself as a matter of policy does not engage in divisive political rhetoric or take positions with respect to partisan agendas,” Gash said. “We leave these important debates — and they are important — for the academic and educational conversations by our scholars and students engaging in thoughtful discourse by appropriate avenues in their individual capacities.”

Moving forward, Pepperdine will review marketing and communication policies and create additional “quality control processes,” Gash said. Neither Gash nor Peterson gave comment regarding the call from alumni to remove Peterson from office, but Gash did say the University will take appropriate administrative action consistent with University policy.

“Let me also acknowledge the pain, hurt and divisiveness experienced as a result of this,” Gash said. “I am more committed than ever to fostering a strong sense of belonging in this community. It’s clear to me there’s more work to be done. I look forward to doing that.”