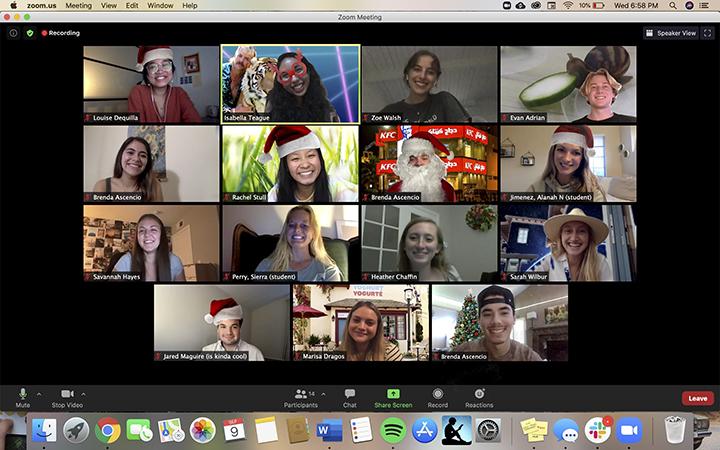 Students virtually gather at the Student Programming Board’s Gingerbread and Jams event Dec. 17. The Board used some of their funding to supply the first 20 signups with a gingerbread making kit. Photo courtesy of Jared Maguire

Pepperdine’s clubs and organizations are adapting to the changes caused by a reduction in funding over the fall semester while making plans for the upcoming semester. The move to online classes during the fall semester and COVID-19 restrictions on gatherings resulted in the reduced Campus Life Fee, the source of funding for organizations in the Pepperdine community.

Seaver Dean Micheal Feltner wrote in an email to the Pepperdine community July 9 that the Campus Life Fee for fall semester would be $63, half of the usual amount of $126. In a Seaver College Student and Families Virtual Town Hall, Connie Horton, vice president for Student Affairs, said the Campus Life Fee will remain unchanged for the spring semester.

“It’s definitely been a weird year where programming and online events aren’t the best especially when you’re doing online school,” said senior Daniel Orgill, vice president of finance for Inter-Club Council. “But I think a lot of clubs were still able to use the funding that we had, and it was good.”

Effect of the Reduced Campus Life Fee on Organizations

ICC administers their percentage of funding to the 90-plus active clubs and organizations at Pepperdine. When distributing resources for the fall semester, ICC exercised caution, Orgill said.

“Usually, we know what the Student Life Fee will be each semester, and we know it’s not going to be changing, but this semester they [Pepperdine] only gave us what it would be for the fall semester and they didn’t know how much it would be for spring semester,” Orgill said. “In the beginning of fall semester, it was difficult to allot funds and decide where they should go because of that reason.”

ICC allotted up to $2,000 for general funding, $2,000 for student development and $250 for promotional funding per club. Orgill said the funding fluctuated based on the needs of each club, and the student leader of each club and organization determined funding usage.

The Board used their funding to sponsor events and provide supplies such as pumpkins for a pumpkin carving contest and Christmas trees for a decorating contest, said senior Jared Maguire, a member of the administration and special projects team of The Board.

To combat Zoom fatigue, junior Heather Chaffin, a member of the administration and special projects team of The Board, said Boarders hosted live Instagram streams and held events such as “Zoom Out” from Sept. 21-25.

“It was a really cool event that we got to do to highlight and encourage people to get off online since we go to school virtually and it’s a lot,” Chaffin said. “So it was sending people fun little giveaways and things to encourage them to go outside and take a walk.”

A team of 13 Boarders decided on and planned events, Chaffin said.

In addition to events solely run by the Board, Boarders assisted clubs in funding bigger events and featured these events in their newsletter, Chaffin said. These co-funded events included the Art Club’s “Kraft and Craft,” an event where students painted while eating Kraft Macaroni and Cheese.

“It was just a really great way to get people involved and get people supplies to participate if they didn’t want to spend their own money to do so,” Chaffin said. “That’s something that the Art Club may not have been able to do on their own, but, with our partnership, they were granted more funding through us to be able to see that event come to life.”

Junior Tyler Alba, the president of the Pepperdine Engineering Society, said the club used the fall semester’s funding from ICC to get the supplies to host a series of 3D modeling based seminars and to send students the supplies needed to create their own projectile launcher based on the model. The Pepperdine Engineering Society sent pictures of the projectile launchers to ICC at the end of the seminar.

SWAB receives 10% of the Campus Life Fee but did not respond to requests for interview nor details on how they spent their funds during the fall 2020 semester.

The Pepperdine Engineering Society’s projects would often take more than one meeting, and Alba said he was able to determine student enjoyment by keeping track of weekly attendance and communicating plans with the other members of the organization.

“If students are continually or regularly showing up to the meetings to participate in the project, and they’re showing interest in the project then I know that’s a successful project,” Alba said.

The Board asked students for feedback after each event and contest through forms on Peppervine and polls, respectively. Maguire said in the weekly meetings the Boarders reviewed suggestions from forms and discuss ways to implement them. These meetings continued through the January term with a smaller group.

Students also sent emails detailing what upcoming events or ideas they would like to see executed by replying to the newsletter Maguire said.

“I’d say it’s been pretty positive,” Chaffin said. “This semester obviously looks very different, and it’s been a challenge but I think people have been really great. They’ve been coming to our events, we’ve had a lot of big turnout, and they enjoy it.”

In addition to surveys after each event, Chaffin said the Board sent out an end-of-semester survey to get a broad idea of what students want to see in the spring.

“We’re very conscious that it’s student money and we’re all students here, and so that’s why when we were talking about feedback we really do want to hear from students that, ‘Hey, this could be a cool idea or that could be a cool idea,’ because we want to be able to give back an experience to them,” Maguire said.

In the wake of Pepperdine’s spring semester beginning online, the Pepperdine Engineering society is looking for topics that students will enjoy and will help them in the future, said Alba.

The Pepperdine Engineering Society plans to use next semester’s funding to provide club members with Arduino kits, packages of equipment that introduce users to coding and electronics. Alba said students will be able to apply what they learned in coding classes to projects within the club.

“I’m still researching what we can do, or what projects I can bring to the table and see what the club wants to do,” Alba said. “I don’t like to just say ‘here, we’re doing this.’ I want to get feedback from everyone and see what they want to do because I feel like that leads to better projects and better times.”

As a result of the continuing reduced funding and online instruction, the Board will continue to cut costs when possible as they did during fall, Chaffin said.

Additionally, the Board hopes to expand their programs to include students in time zones that differ greatly from Malibu, Chaffin said.

“We’re hoping to work with the international Ambassador team, and kind of create events that can cater to international students and their different time zones, and just be a lot more conscious of that and hopefully be able to include everybody in the community,” Chaffin said.