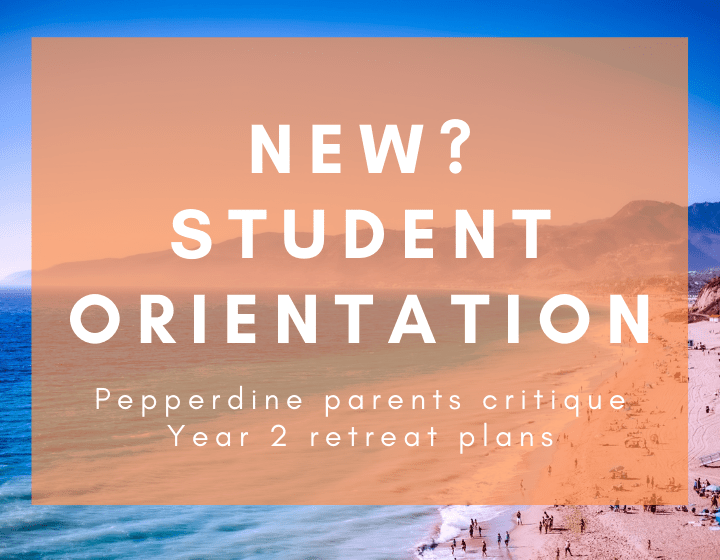 Pepperdine will host its Year 2 Welcome retreat beginning Aug. 20, and about a third of the Class of 2024 will attend.

Connie Horton, Pepperdine vice president for Student Affairs, wrote in a July 28 email that 266 students (as of July 28) are registered to attend the event, of the more than 800 students in the sophomore class.

Parents of rising sophomores expressed concerns about the price tag of the event, which is $1,500 for the week of programming, including three-and-a-half days on campus and three-and-a-half days at an off-campus retreat center. The parents were also critical about what they termed the “all or nothing” approach — having no alternate orientation option for students who do not attend the retreat.

“Really being on campus and understanding and learning who your peers are, as opposed to paying $1,500 to meet your peers, can be a bit much for families,” parent Anisha Jackson, mother of sophomore Holly, said.

A group of 28 parents signed a letter to President Jim Gash, sent via email July 6, to voice their opinions.

The letter requested “some sort of NSO experience” for sophomores who chose not to attend the Year 2 Welcome retreat. It noted the lack of campus tours and a welcome reception for students and parents, many of whom had yet to set foot on campus.

Jackson penned the letter after realizing that other parents in the “Pepperdine University Class of 2024 – Parents” Facebook group agreed with her concerns. The letter also mentioned this particular class was not able to experience the final quarter of their senior years of high school, including graduation, or their first year of college in person.

“I’m really just trying to be an advocate for these students and parents,” Jackson said. “It was disheartening, reading some of the comments from the parents referring to this class as ‘the lost class.’”

The Year 2 Welcome retreat also serves as a replacement for the Year2Malibu trip to Catalina Island, which was a free event in 2019.

Horton drew differences between NSO and the Year 2 Welcome: NSO is a mandatory program, while the Year 2 retreat is optional, and the retreat has extra costs associated, including camp, special activity fees and transportation. Registrants and attendees were also offered the opportunity to apply for financial support.

Jackson received a response from Gash within 48 hours with the assurance that the Student Affairs office was “working on plans for programming, receptions, tours, etc., for these students over [the weekend of August 28], Gash wrote.

Horton confirmed the details of this programming: a special reception at the Brock House (one Aug. 28 and one Aug. 29, depending on when students arrive) and campus tours on those dates as well.

Parent Toni Lovejoy remained unsatisfied with the alternative welcome event, because it gives students fewer than two days to prepare for the beginning of classes Aug. 30.

“Now there’s a level of pressure to fit everything into two days, where before, there was this slow introduction and excitement and making some friends,” Lovejoy said. “But now the only way for [my daughter] to make friends is to pay for it.”

Ken Roybal has a son who will be a sophomore at Pepperdine, and he said the family looked forward to experiencing on-campus orientation festivities like they had seen on YouTube.

“It’d be great for these kids, who missed out on so much, to get back to a sense of normalcy and participate in the things that they maybe saw in videos,” Roybal said.

Roybal and Lovejoy said they would have preferred the rising first-years and sophomores had a joint NSO experience on campus.

“We just wanted to get back to a sense of normalcy and have them participate in the things that they were not able to as freshmen,” Roybal said. “I figured the classes aren’t huge; it’s not a gigantic school. I figured they could blend them — blend the sophomores with the freshmen. It could be done.”

The group of first-years is between 1,100 and 1,200 strong, much larger than the sophomore class — in fact, it is the largest class in Pepperdine’s history, according to the Aug. 4 President’s Briefing.

Lovejoy said she is angry and frustrated with the way the University is handling the long-awaited arrival of its sophomores. She said the retreat experience, which will take place at the Forest Homes Christian Camp in San Bernardino, Calif., seemed “exclusive” toward students who were uncomfortable in an intimate situation.

“There’s a lot of inconsistency and lack of consideration and understanding that’s happening, and it’s tainted us,” Lovejoy said. “It’s stripped away a bit of the excitement.”