Chickenpox at school may seem like something from elementary school, but a chickenpox flare up at Pepperdine has students wondering what to do to protect themselves.

University Public Relations sent out a health advisory email Jan. 18, notifying the Pepperdine community of a probable chicken pox case. The individual is a Malibu campus resident, meaning all students, staff and faculty on campus are at risk of exposure.

“Chickenpox is a highly contagious disease that infects a very high percentage of those who are exposed and have not been vaccinated or had the disease; it can affect even those already immunized,” PR wrote in the email.

Dr. Lucy Larson, the medical director for the Student Health Center, wrote in an email that students are not facing an outbreak.

“We do not have a chickenpox outbreak at Pepperdine,” Larson wrote. “An outbreak (for chickenpox, as definition numbers vary according to the disease) is five or more cases. Currently, there is only one case.”

This is not the first time a Pepperdine student has contracted chickenpox, Larson wrote, and the university has a procedure set in place to minimize the disease spreading.

All Seaver students are required to be vaccinated for chickenpox (varicella) before coming to campus, according to the community website and the academic catalog. New students must show required vaccination forms before being able to add/drop classes.

“Chicken pox is not common on [college] campuses, but cases and outbreaks do occur with some regularity,” Larson wrote. “When students are living in tight quarters it can promote spread of the virus, especially if a large enough percentage of the population is not immune or vaccinated.”

The University Policy Manual does not indicate whether staff and other faculty are required to be immunized.

Student reactions to the possibility of chickenpox on campus have been mild, like this photo posted by a student-run meme account @bepperdine_safespace. 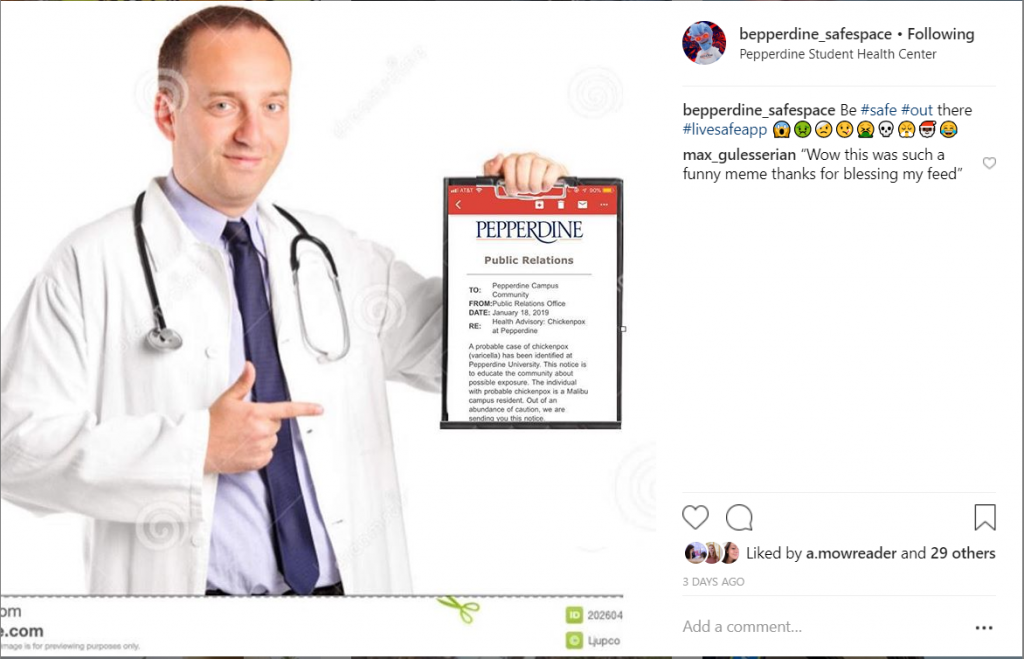 Freshman Bradford Holladay said he is not worried about the possible chickenpox case, even with the individual’s anonymity adding some mystery to the situation.

“I didn’t really care,” Holladay said. “I think that the Student Health Center knows what they’re doing and I trust them. I think if it became a problem they’d tell us what to do.”

The symptoms of chickenpox are a fever, headache and general fatigue followed one to two days later by a rash beginning on the face and chest, which can spread to the entire body, according to a health form from the Student Health Center. 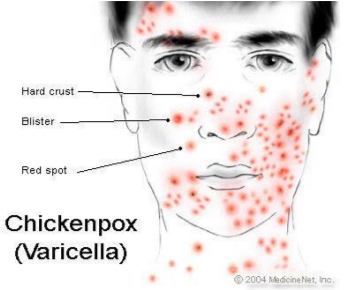 “The virus spreads by touching or breathing virus particles from an infected individual with chickenpox or shingles,” according to the form. “Symptoms usually develop 10-21 days after contact with an infected person(s). A person with chickenpox is contagious 1-2 days BEFORE illness and until all sores have scabbed over.”

The disease lasts five to seven days, but the Student Health Center wrote in a health advisory form that all students who develop a rash over the next three weeks should call immediately.

“Those vaccinated can still contract the disease but will usually experience milder symptoms,” according to the Student Health Center form.

Those most at risk for contracting chickenpox are people who are unvaccinated or have a weak immune system, pregnant mothers or young babies and children, according to PR’s email.

“In order to protect other students, if you believe you may have chickenpox, stay away from public places such as school/classes/campus activities until Student Health Center staff have cleared you to return,” PR wrote.

“I do feel really bad for anyone who does have chickenpox because I’ve never had it, but that sounds pretty bad,” Holladay said. “But it also has a funny name so … My best wishes go out to the student [or individual].”