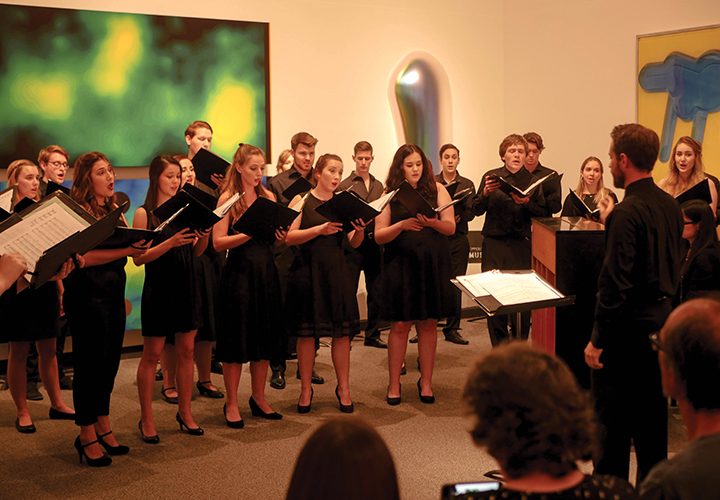 Choral music echoed in the Weisman Museum at the Pepperdine Chamber Choir’s fall concert. Under the direction of music professor Ryan Board, the group performed songs in a variety of genres, all surrounding the theme of Psalm 8:3.

The performance, which took place at 7:30 p.m., on Oct. 27, featured an original piece by Professor N. Lincoln Hanks, titled “When I Behold.”

Board introduced the piece at the beginning of the concert to give audience members a chance to appreciate the composition for its originality in the moment rather than in retrospect. The choir commissioned the piece this year and plans to sing it at the American Choral Directors Association (ACDA) regional conference this coming March.

Board said this semester’s repertoire is intended to prepare the group for the conference, which showcases the best performances in a five-state region. He said this year’s musicians are unique in the flexibility and sheer power of their voices.

“Their louds are really exciting and vibrant,” Board said. “Conversely though, they’re extremely flexible and nuanced and they can be very quiet, very pianissimo, a full range of dynamic colors.”

Sophomore Nathaniel Thompson, who sings baritone and bass, said he enjoys the dynamic and ethereal pieces the most.

“I’m a fan of the more madrigalish chain, like ‘Northern Lights’ and ‘Stars’ and the more dissonant stuff,” he said. “I really like color chords.”

“Northern Lights” featured clear, high notes with lower harmonies that built around the main melody. The song, according to Board, was meant to evoke the feeling of wonder at seeing the Northern Lights in a time when people didn’t know what they were.

For the piece “Stars,” members of the choir sang over the sound of tuned wine glasses. Sophomore Emma Ujifusa, a soprano, said that playing the wine glasses was rather easy.

“You just dip your finger in it and really lightly move it,” she said. “We have someone tune them. There are lines on the glasses, but they had to go through and figure all that out.”

The variety of sounds and voices echoed around the museum. Notes lingered in the air and reverberated at the end of each song. Board said he chose the Weisman Museum as the venue for this concert for that atmospheric quality.

“A lot of choral music was written with that acoustic in mind, so we actually produce a concert that’s more accurate and more towards the composer’s intentions,” Board said. “It just makes you feel like you’re in a big, soaring, sacred space like an old church.”

Although concert attendees filled the venue and left only standing room, Board, Ujifusa and Thompson encouraged more students to come support the musicians and enjoy the music.

“In my experience, students who usually come once come again because they just didn’t know how interesting and unique it was going to be and how much they would like it,” Board said.

Ujifusa said her friends come to support her even though they don’t typically listen to classical music and they enjoy the concerts anyway.

“They always are really impressed and a lot more entertained than they were expecting to be,” she said.

Thompson said it’s worth going to a choir concert just to hear the musicians’ technical skill, even if the style of music isn’t something the student is used to.

“If the music isn’t quite their style, I think you can still take a lot of pleasure in just listening to a bunch of good singers,” he said.

The choir will next perform at the annual Christmas Concert on Nov. 30 in Smothers Theatre. 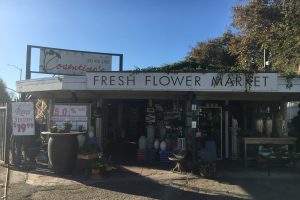 Photos by Mary Cate Long When cruising down PCH, it's easy to miss the little flower shop tucked away on the side of the road...
Copyright 2013 Jupiter Premium Magazine Theme
Back to top