Because of Stephen Dickter, Hodgkin’s lymphoma disease patient and blogger Karin Diamond realized she could not allow her illness to limit her.

Because of Stephen Dickter, Professor Delphine Broccard was encouraged to seek out the best and never settle.

Because of Stephen Dickter, a 4-year-old boy shaved his head, too.

Communication graduate student Stephen Dickter was a light in a sometimes-dismal world, according to those who knew him.

Dickter, 37, died unexpectedly Sunday from Hodgkin’s lymphoma while recovering from stem cell transplantation. He left behind his wife, Jennifer Berry, and many others who loved him dearly.

Dickter was diagnosed with cancer in April 2009 and started treatment thereafter. He began attending Pepperdine in fall 2010 with the intention of getting his master’s degree in Communication. Dickter said he eventually wanted to earn a doctorate degree to teach media production. 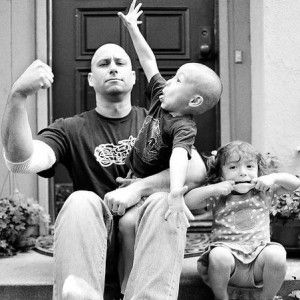 Throughout his battle with cancer, Dickter focused on his master’s thesis.

“Stephen refused to let things stand in his way,” said Assistant Professor of Communication Sarah Stone-Watt who, with Craig Detweiler, worked with Dickter as co-chair on his thesis. “He challenged everything from mundane bureaucracy to life-altering cancer but even as he confronted challenges, he cared for people.”

As a determined videographer and cinematographer with 15 years of experience, Dickter helped develop the master’s program for media production here at Pepperdine. That program began this semester.

There are endless stories about him helping others, according to friends and family.

“I had had a really bad accident over summer so I was in a wheelchair when I (arrived) last fall,” Anderson said. “I was rolling my wheelchair down the hallway after class and Stephen offered to push me … Even with everything he was going through, he always reached out to help others.”

“He didn’t sit around complaining,” Judith Tapper, Communication graduate program coordinator said. “He believed in getting out there and giving it his best. That’s how you make it to the top of the industry. That’s how you beat cancer. That’s how you keep walking when you can’t stand up.”

Director of Disabilities Services Tammy Selby, who arranged Skype sessions between Dickter and his classes when he could not come to class, agreed.

“I don’t think he ever let on how grave his condition was,” Selby said. “I always felt like a time would come when he would finish with his program and be fine.”

Dickter maintained a blog throughout his treatment. While first established to keep his friends and family up-to-date, it soon became a tool that reached other cancer patients. He would often try to publicize any new medical care he found. His blog became a tool for people who wanted to understand and talk about cancer in an online community.

“He really embodied living life to the fullest,” Broccard said. “It’s someone like Stephen who encourages those of us still on this earth to seek our full potential and to touch others along the way.”

The graduate students plan to hold a memorial service for Dickter on Wednesday, Oct. 17, at 4:30 p.m. in Stauffer Chapel that will be open to all students and faculty who knew him.

In response to sending flowers, Stephen’s wife, Jennifer, has suggested to consider contributing to a scholarship fund in his name for graduate students in media production. Checks may be made out to Pepperdine University with the notation line – Stephen Dickter Scholarship, and a donation box will be available at the service.

To donate to the Stephen Dickter Pepperdine Scholarship fund:

Your fall makeover does not have to be limited to tall boots, scarves, and skinny jeans—what you put in your body can make...
Copyright 2013 Jupiter Premium Magazine Theme
Back to top