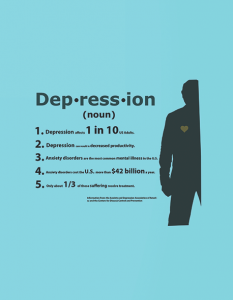 For junior William Cohen and thousands of other college students on campuses across the country, depression is as prevalent as it is debilitating.

“I felt like I was drowning,” Cohen said. “I felt lost. I didn’t know where I was. I was tired. I didn’t want to engage with the world. I became an isolationist. I wouldn’t leave my room for long periods of time.”

The very nature of going off to college poses a risk to normal behavior or mood changes. In 1990, this problem led the U.S. Congress to establish the first week of October as Mental Health Awareness Week. Since then, advocates have come together to sponsor many activities every October.

Next week, Pepperdine will be following in this tradition and participating in the national Mental Health Awareness Week to promote the knowledge of mental illnesses across campus.

The Counseling Center hopes to have a positive impact on students in the following week for a better support system for students experiencing depression throughout the rest of the year.

“We know that depression is one of the most common mental health concerns experienced by college students,” said Robert Scholz, assistant director and staff therapist in the Pepperdine Counseling Center. “Depression’s most severe forms can lead to suicidal thoughts and behaviors. Suicide is the number one leading cause of death on college campuses. We hope our efforts lead students to get help if they are struggling and to make friends aware of what to do if they have a friend showing signs of depression.”

The Counseling Center will be holding several events next week, including the National Day of Prayer for Mental Illness Recovery and Understanding on Tuesday.

Scholz said Pepperdine will also sponsor the National Depression Screening Day on Tuesday from 11 a.m. to 1 p.m. outside the Tyler Campus Center for students to have a mental check-up. The Counseling Center staff will also be providing information about depression and some giveaways.

There will also be a Convocation called Depression and the Dark Night of the Soul on Wednesday at 1 p.m.

Active Minds is a student organization that will also be participating in the week’s events. “In order to reduce the stigma, we will be tabling and hosting events related to depression, suicide, eating disorders, etc.,” said Mia Longo, co-founder and president of Active Minds. “My motivation for supporting this cause around campus is that so many students are affected by these issues … and [they] need to know that help is available.”

“We want you to know that you’re not alone,” he said. “Many students struggle with symptoms of depression and, with professional help and the support of loving friends, the illness is treatable and things can get better. Some students still have the perception that ‘if I go to counseling then it must mean I’m crazy.’ This just isn’t the case. Students go to a medical doctor to deal with physical health concerns, the dentist for a toothache, why wouldn’t you see a professional if you’re dealing with a mental health concern?”

Cohen was diagnosed with depression in April though he experienced symptoms of depression throughout the year. He went to the Counseling Center at one point during the fall semester but said he found his sessions with a graduate student unhelpful.

A few months later, Cohen returned to the Counseling Center with his father where he discovered his depression was severe, and he was given medication.

“I was worried to start taking medication,” Cohen said, “but Dr. [Connie] Horton told me medication isn’t going to swim the distance for me. It’s just a ‘floaty’ to keep my head above water. I felt buoyed and medication gave me the ability to work on lifestyle changes and relationship changes to make that permanent. It’s still not permanent. I fight a day-to-day battle. It hasn’t gone away yet.”

Even after receiving helpful counseling at Pepperdine, Cohen continued to experience symptoms and ultimately took a medical leave at the end of last school year, which he said helped him a lot.

“I’ve always been somebody who doesn’t give up,” Cohen said. “I felt like going home was giving up and I got really mad the first week or so. Then I felt really at peace about it. God really worked with me and told me that’s where he wanted me.”

Cohen, like Scholz and Longo, said that he strongly believes in seeking help, as it is the only reason he is still even attending Pepperdine.

“God is bringing people to me and he’s telling me to talk to them about what’s happened to me and that’s helped resolve issues in other people’s life,” Cohen said. “Seek help. Not because only you need help but because everyone needs that same kind of compassion and support. You can’t do it alone, and I think that’s true for everybody’s lives not just for people with depression. We all need support at all times of our lives.”

Ballin’ On A Budget: This Week’s Online Savings

Students crowded into the HAWC as the new Project Serve locations, both domestic and international, were revealed last...
Copyright 2013 Jupiter Premium Magazine Theme
Back to top