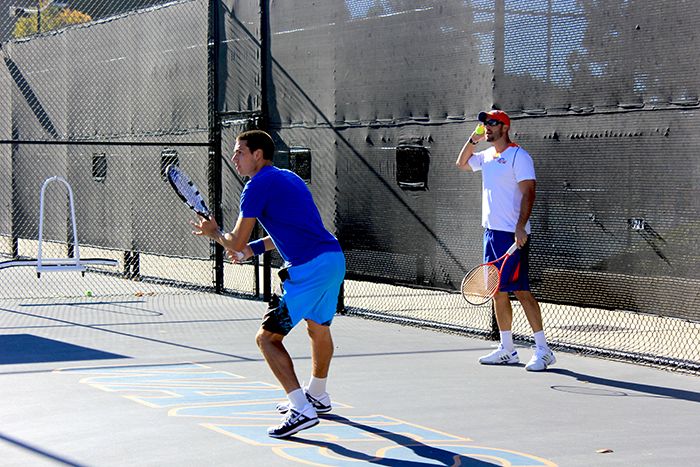 Stefan Menichella stepped onto the court ready to bring everything he’s got as a premier player and leader for the Waves.

He’s a Santa Barbara kid known beyond the Cali block as a hard hitter. Entering his sophomore year, Stefan Menichella was named captain of one of the nation’s premier tennis programs alongside sophomore Guilherme Hadlich.

Tennis season swings into action in January; however, Menichella is not one for rest. In his first tournament in September, Menichella was crowned with his first collegiate title at the Princeton Invitational.

In October, Menichella made an appearance at the USTA/ITA South Western Regionals, blazing through the round of 16 to finish in the quarterfinals.

“Tennis has always been my passion,” Menichella said. “I chose Pepperdine to help me make it to the next level. Hopefully, I can get to playing professionally and see what I can do.”

From California, Stefan is making waves across the continent. While most tennis athletes of his caliber opt for tennis academies in Florida, Menichella attended University High School in Irvine — as he puts it, a “normal high school.”

His experience on the court was far from normal, graduating as TennisRecruiting.com’s No. 2 for Top Mid-Major’s Men’s Classes and contributing to his team’s four CIF team titles.

His travels with tennis have taken him to Alabama, Texas, Michigan, Florida and Mexico for tournaments. No place feels like home more than with his team at Pepperdine, according to Menichella.

“I couldn’t ask for better teammates and coaches,” Menichella said. “They are the most influential people in my life. I am surrounded by passionate coaches and play with my best friends. We play in an unselfish way. If you don’t improve in a practice, but you help someone else improve, then it was time well spent.”

Menichella’s leadership skills shone through in his freshman year, as he stepped up midseason to the No. 1 slot against the BYU Cougars, defeating their ace 6-4, 6-4. He played in 27 of the 30 game season, going 18-14 overall.

The love of the sport grows as deep as his family roots. His parents both competed as swimmers at Harvard. Menichella was placed in swim lessons from a young age, but “gravitated towards the ping pong table on the pool deck each practice,” he said.

In addition, at ages 6 and 7, his uncle would take him to the courts every day to play tennis for hours on end. It was a perfect match. His first big win was as early as the 10 and Under Sectionals of Southern California, but Menichella’s team mentality is what really sets him apart.

“As an individual, it is important for me to be a great leader,” he said. “I want to play as high as I can as a team and help everyone improve. I want to be a role model and hold myself to that standard.“

The most difficult moment in his career was last year’s loss to San Diego. Not one to wallow when he’s down, Menichella said he uses that game as motivation: “I hate to lose a lot more than I like to win.”

“Stefan is definitely one of the most hardworking guys on the team who is ready to practice and train extra,” senior Rakshay Thakkar said. “He has incredible energy and is tough to keep up with. All the guys on the team look up to him, especially because of his commitment to the program.”

Loved by his teammates and with the mentality of a workhorse, Menichella is the tennis golden child of the Golden State. His ascent to the top is just beginning.

Photos by Allison Hubbard After a couple of tough road losses against San Diego and BYU, the women’s volleyball team...
Copyright 2013 Jupiter Premium Magazine Theme
Back to top