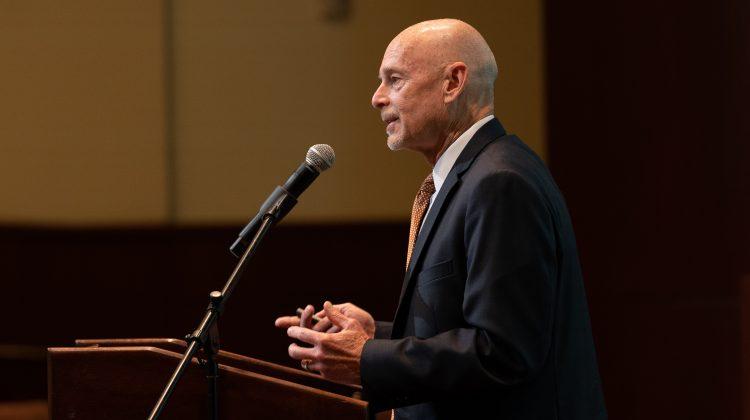 Pepperdine welcomed the second speaker of the President’s Speaker Series, Baylor University Professor of Social Sciences Byron Johnson on March 10 to campus. Johnson spoke to the community about the impact of faith on prison inmates.

Johnson’s research on faith and human flourishing will continue in partnership with the establishment of Pepperdine’s Center for Faith and Common Good.

“The vision for this center is to position Pepperdine in the middle, at the center, at the forefront of the study of the impact of faith on human flourishing on societal impact and on the common good,” President Jim Gash said.

Starting April 1, Johnson will carry the title of the Visiting Professor of Religious Studies and the Common Good at Pepperdine’s School of Public Policy. He is also the founder of the Baylor Institute for Studies of Religion and the director of the Program on Prosocial Behavior.

Though Johnson’s presentation focused on the impact of faith on prisoners, the audience in Elkins Auditorium let out chuckles of laughter every now and then after Johnson’s comedic remarks. Pepperdine First Lady Joline Gash said Johnson kept her on the edge of her seat.

“I thought [the presentation] was awesome,” Jadovitz said. “I think that faith-based research is something that isn’t done enough or published enough.”

“I thought it was a phenomenal story — what he’s doing,” Hafner said.

Both students said they are also excited about the new Center for Faith and Common Good.

“The fact that we’re opening up a huge center here at Pepperdine is just really encouraging,” Jadovitz said. “I think it’s gonna be great for the University and for the academic world.”

The Pepperdine community said they look forward to the new opportunities that will accompany the Center for Faith and Common Good. Johnson said he is eager to see what will come of the research center.