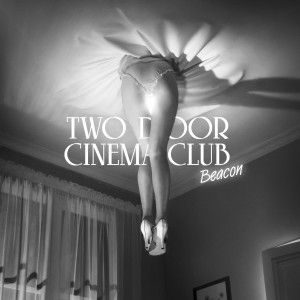 The three-member indie rock band Two Door Cinema Club has returned to the scene and attempts to beat the sophomore slump with the release of their new album “Beacon.” Released on Wednesday, the second full-length LP from the Irish band comes on the heels of their debut album “Tourist History.” The 11-track album is a departure from their original sound but still holds strong to their catchy, upbeat tunes.

Formed in 2007, Two Door Cinema Club consists of Irish natives Alex Trimble, who fronts the band with his vocals and adds to the sound with his rhythm guitar, beats and synth skills, Sam Halliday, who plays lead guitar and provides backing vocals, and Kevin Baird who plays the bass and brings some backing vocals into the mix as well. Formed in grammar school, Trimble, Halliday and Baird had started a band with a drummer but soon disbanded. Following the break up, the three guitarists joined forces once again without a drummer and formed Two Door Cinema Club.

The band’s following grew through the use of MySpace, and soon after they decided to drop their university aspirations and pursue their music. Their EP, “Four Words to Stand On,” released in 2009, was the first real studio material the band worked on and, to their fortune, was well received by fans and critics alike. The positive response led Two Door Cinema Club to pursue a full-length album and they began work on “Tourist History” quickly after the release of their first EP.

February 2010 marked the drop of their first album and with it a steady rise of popularity, especially in the UK market. Reaching relative success on the UK charts, Two Door Cinema Club also saw their music catch in the US. Although they didn’t gain immediate fame, their songs — similar to The Black Keys — were utilized in video games like FIFA 11 and on film soundtracks. The band even made their American television debut on “Late Night with Jimmy Fallon” where they performed their most popular song “What You Know.”

Touring extensively, Two Door Cinema Club made it back to the studio and began working diligently on their next album effort. In April, the band announced via their Twitter that their second album was almost done. Months later, the band finally gave fans what they were waiting for.

The 11-track LP is infused with a more mature sound that is still as catchy and dance-like as their debut material, but incorporates the styles of bands such as Muse and Coldplay with their heavily layered musical tracks and instrumentals. However, Two Door Cinema Club has maintained their unique indie rock sound that made them a band to watch when they first hit the scene in 2009. Their song intros are much more electro-dance than what was seen in their first album, but they pull through by twisting in those guitars and crisp vocals.

The first official single from “Beacon” is a track titled “Sleep Alone.” The most Two Door sounding track on the album by far, Trimble’s vocals and the dynamic rhythms of all the guitars on this song are magic. It’s incredibly catchy — a testament to the band’s knack for creating memorable songs — and yet it shows off a more mature, melancholic side of the band not seen in their first album. “Sleep Alone” was a smart release for the album and sets the tone for what is to come.

A second song off the album that’s worth listening to — although the entire album is worth the listen — is “Settle.”  The song begins softly, very different than what fans were accustomed to in “Tourist History.” Its mellow vibe floats up into the air and lingers in your ears. The intro builds gradually into a perfect crescendo of guitars and Two Door sound. “Settle” does just as the title suggests. It builds softly into something more upbeat then recedes back into the lullaby rock of the introduction. It’s a beautiful song and showcases a different side of the band.

Two Door Cinema Club proves that they are masters of music and can beat the sophomore slump with their latest LP “Beacon.” It’s a strong effort, finely crafted in a way that shows off the sound fans and critics praised in their debut album, but also allows the band the opportunity to explore and mature as musicians. It’s a fantastic album that is a definite must-hear for those who love solid bands who put out strong efforts.

The Pepperdine cross country team is off to a successful start as they completed their first meet of the season at the Cal State...
Copyright 2013 Jupiter Premium Magazine Theme
Back to top