Pepperdine has expanded its campus to an international program set to take place this summer in the “Land Down Under.” While the program may be appealing to many, it is more geared to those pursuing a major in film or media.

Unlike other international programs, the Australia Film Program will require extra outside work prior to touchdown. The nature of the Film major is preplanning story ideas, visual concepts and task assignments, which will all need to be squared away before students arrive on July 8, 2016 and leave Aug. 5, 2016. Only 18 to 20 students will be admitted into the program, and they will be divided up into two separate groups for efficiency. Each group will complete pre-production planning in the spring semester. The course offerings for the summer program include FILM 470 Narrative Filmmaking: Theory and Practice, and FILM 311 Film and Culture, which is the one class that fulfills the Fine Arts general education requirement.

“My hope is that we can provide a chance for our best students to have an advanced intensive production experience in an international setting that may approximate the kinds of international co-productions that are happening all over the globe,” professor of Communication Craig Detweiler said. “If the program goes well, I hope it can become an ongoing program for film majors.”

The application, which can be found on Pepperdine’s website, involves an interview with Detweiler, since he will be overseeing in the summer as the faculty member for the program. In addition, each student will be required to submit a short film script that showcases elements highlighted in film and media courses.

Detweiler said he thinks Australia is an up-and-coming hotspot for media production, especially since it is often utilized by Hollywood studios as a way to keep within their budget. Detweiler, a USC film school graduate, has taken it upon himself to share his passion for creating stories with students of the Pepperdine community, and said he is thrilled to be the faculty advisor for the Australia program. His career has involved all aspects of story-making, from writing to directing and even producing films.

Detweiler said he met a wide array of Christians in Australia working in film, music, TV and the arts, including people who founded the International Screen Academy in Sydney.

“We traded notes on our nascent film programs and we realized that Pepperdine’s summer break in July coincided with the ISA’s ‘winter break’ in Australia,” Detweiler said. “What a great opportunity to utilize their excellent facilities and equipment for mutual benefit.”

Junior Marin Longfellow expressed desire to attend the program. “I want to go into broadcast journalism, which deals a lot with the production aspect of the media,” she said. “I wish I could attend the program, because it sounds like an incredible opportunity to build on team skills as a production unit.”

Detweiler said his hope is that “this summer’s pilot program could become a semi-annual offering for Film and Media Production majors similar to the Theater program’s highly successful Edinburgh program.”

The program allows students accessibility to explore Australia’s beauty with others from the Pepperdine community. Summer 2016 in Australia will provide students with an international lens to capture the stories they strive to tell.

“Traveling to Australia has always been a dream of mine; combining it with learning about something I’m passionate about is something out of a fairytale for me,” said senior Journalism major Olivia Losoya, who hopes to be one of the first to experience the new program. “Studying film in another country will give me insight to different methods and techniques.”

The program will include an intense curriculum that is both fast-paced and work-intensive.

“I hope they would have a sense that Hollywood is a term that encompasses the entire globe,” Detweiler said. “When you’re making movies within the studio system, you’re really creating them for a global market. This puts students much closer to that reality, which expands their horizons and creative thinking.” 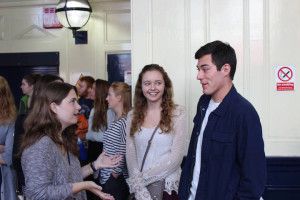 Photo by Matthew Westman“Hey! How’s it going? A bit warm today, isn’t it?” With a string of a few words...
Copyright 2013 Jupiter Premium Magazine Theme
Back to top