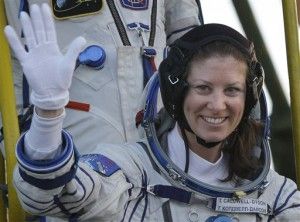 Space: the final frontier. And Pepperdine University learned a lot more about it this fall semester when astronaut Tracy Caldwell Dyson turned Elkins Auditorium into a living planetarium during a November visit to campus, filling the darkened auditorium with stunning images of the earth from space.

Caldwell was invited to speak for the W. David Baird Distinguished Lecture Series, mostly due to the encouragement of close friend, Pepperdine chemistry Professor Jane Ganske. Caldwell and Ganske met and studied atmospheric chemistry together at the University of California, Irvine.

Ganske expressed how Caldwell’s immense love for fixing things began at a young age, when Caldwell would travel with her father, an electrician, to all his various job sites. Caldwell states that her job as an astronaut now is a lot of “wrench-turning, button-pushing and orbital mechanics,” going back to her fundamental hobby of fixing and tinkering.

Caldwell received a B.S. in chemistry from California State University, Fullerton, studying atmospherically relevant gas-phase chemistry. After studying Russian and becoming a private pilot, Caldwell was accepted into the NASA program in June 1998.

Caldwell’s dream to become an astronaut was fueled by her love of working with her hands and a desire to work as part of a team. Her father’s influence, and mentoring from a past teacher who also became an astronaut, inspired Caldwell to apply to NASA.

“The question people ask me the most often is, ‘What is it like to live in space?’ Well I’m here to answer that question,” Caldwell said at the beginning of her presentation.

The first part of Caldwell’s presentation was an overview of her experiences living on the International Space Station.

Caldwell’s first trip to space was mission STS-118 in August 2007, on Space Shuttle Endeavour, the 199th space shuttle flight and the 22nd flight to the station. Caldwell was designated as Mission Specialist No. 1, and during the mission a total of four spacewalks, also known as EVAs, were performed by three crew members. Caldwell however, did not participate on an EVA on this mission.

The presentation primarily focused on Caldwell’s most recent mission, however, Expedition 23, which left in April 2010. Caldwell left from Baikonur spaceport in a Russian Soyuz capsule with two other Russian crew members, Mikhail Korniyenko and Aleksandr Skvortsov.

In June, the team was joined by three more team members of Expedition 24, and both Expeditions left the ISS and landed in Kazakhstan in September 2010. From these two trips, Caldwell has spent more than 188 days in space.

During Expedition 23/24, Caldwell and the team experienced a bit of excitement and stress when one of the pump modules broke and needed to be repaired quickly. Three EVAs had to be performed, this time including Caldwell.

“Doing a spacewalk was a dream come true,” said Caldwell.

Not many astronauts are given the chance to participate on a spacewalk, so Caldwell was grateful for the opportunity.

“This was a chance for me to really prove myself and that I could do it,” Caldwell added.

While circling the globe, the ISS is traveling at a speech of Mach 23, which is the equivalent of about 17,500 mph. Caldwell described her experience during one of the EVAs: “I looked down and all I could see were my little feet and the world rushing below me. It’s just a little distracting when you’re trying to work.”

After describing her experiences living on the ISS for such an extended period of time, Caldwell moved on to show a few of the multitude of photos she had taken from a segment of the ISS called the cupola. The cupola is a small module attached on the belly of the ISS with seven small windows through which the earth can be viewed day and night.

During this segment of her presentation, Caldwell’s passion for spending every minute of her free time in the cupola was obvious.

“When I was asked what I would miss most about living on the station, the answer was obvious. The cupola. I don’t know how I would’ve spent four months on the station without it,” Caldwell said.

The photos were stunning. Beautiful, serene, and tranquil are just a few inadequate descriptions that come to mind.

Since the trip took place from April to September, Caldwell described how instead of feeling the seasons change, she was able to see them transition all over the world at once. Some scenes moved Caldwell to tears, although she was unable to tell.

“Sometimes I wouldn’t even know that I was crying until suddenly I just couldn’t see anymore,” Caldwell remembers. “Your tears don’t roll down your cheeks like on earth, they just float in front of your eyes.”

Caldwell showed photos of tropical storms and volcanoes erupting, all while appearing deceivingly peaceful from space.

“I’m captivated every time I see these things from space,” said Caldwell. “I would spend hours at a time in the cupola if I could.”

The scenes of earth that Caldwell was able to see were remarkable. Sunsets were incomparable, and when the earth was dark, the terminator, as Caldwell called it, would engulf earth, so that it would not even be distinguishable that there was a planet below.

Possibly the most impressive scenes were of the aurora borealis. Appearing as a liquid snake of color darting across the earth’s surface, the vivid color appeared to float above the atmosphere, illuminating the horizon.

Caldwell also described how differently stars appear in space.
“Stars appear to twinkle from earth because you’re seeing them through the atmosphere,” Caldwell explained. “In space, the stars appear solid, and you can detect the depth that is between the leagues of stars. It feels as if you were in a bowl of stars.”

Caldwell expressed her gratefulness for being able to participate in such an experience.

“When you realize how many billion people there are on the earth, and how few people have gotten to see what you’re seeing, you suddenly feel very privileged. There isn’t any more of a blessing that I could ask for.”

She also articulated how appreciative she was to have been able to work on such a project as building the ISS. Working on an international station, Caldwell was able to work with astronauts from Russia and Japan, and she loved how the countries were able to come together and unite in space to work toward a common goal. Being a part of a team was a major motivation for Caldwell to become an astronaut after all.

Intended as an hour long lecture, Caldwell’s two-hour long presentation did not feel lengthy. Her passion for her career was conveyed clearly, and it rubbed off onto the audience.

“I want to grow up and be an astronaut now,” said junior Hayden Christensen after the presentation.

“Two thumbs up,” added Corey Howard. “I want to find my own cupola now.”

The feedback in the auditorium was obvious. After hearing about all her extraordinary experiences, everyone wanted to be able to go to space and see the earth not just in photos, but with their own eyes.

“There’s no way you can come back from something like this unchanged,” Caldwell said adamantly. “Living on the station, it’s not just a job, it’s your life.”

Professor and musical director Chris Stivers, fueled by his passion for music, continues his Songfest legacy this year....
Copyright 2013 Jupiter Premium Magazine Theme
Back to top