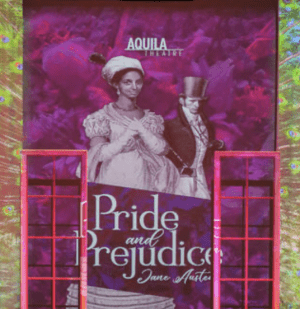 The Smothers Theatre stage is set for the production to begin Oct. 4. Pepperdine’s theater was the second tour stop for Aquila Theatre’s “Pride & Prejudice.” Photos by Sammie Wuensche

Jane Austen’s “Pride and Prejudice” is one of the most quintessential classic romantic comedies, said Desiree Sanchez, artistic director for Aquila Theatre’s adaptation of “Pride & Prejudice.”

The Aquila Theatre Company’s six-person cast performed their interpretation of “Pride & Prejudice” in Smother’s Theatre on Oct. 4. It is a romantic comedy following the story of Elizabeth Bennet and her sisters as they navigate the expectations surrounding love and marriage in the midst of the 19th-century English class system.

The cast enjoyed getting the opportunity to perform such a light-hearted production after coming off of a very difficult year for the company and the world, Sanchez said.

“We had fun laughing, as last year was pretty difficult for everybody in the cast —everybody in the world — in terms of COVID, world politics and two very heavy plays we were touring last year through the pandemic,” Sanchez said. “This year, we were like, ‘Let’s do a play we can really just let loose and laugh.’”

Even though “Pride & Prejudice” is a comedy, Sanchez said it also has very real moments that address cultural issues. One of the themes it focuses on is women’s inequality in the 19th century, Sanchez said.

“Their entire life was determined by who they married and whether or not that person had property bequeathed to them,” Sanchez said. “So, that really was a nice thing to talk about. We had some really interesting perspectives on that.”

For this show specifically, Sanchez said the whole cast worked together to create a collective interpretation of the story from scratch.

“For this particular production, I directed it, but the ensemble cast and myself actually collaboratively created the adaptation of the stage production, which is something we haven’t done before, so it was a unique experience and something I wanted to try,” Sanchez said.

Having a small cast poses certain technical difficulties because each actor has to play multiple characters, and those challenges were exacerbated by the fact that the entire production was put together in about three weeks, Sanchez said. Even though there were challenges, she said the collaboration between the company members was a remarkable way to meld together several viewpoints in one script.

One of Aquila’s goals in its production of “Pride & Prejudice” has been to incorporate diversity into its perspective and casting, Sanchez said. The show has a mixed-race cast, and to inform their interpretation, the members did research regarding the history of people of color in England in Austen’s day.

Although the cast brought in a variety of perspectives, Sanchez said they were able to do so without making any major changes to the original characters and scenes.

“It was pretty spot on,” first-year Rachel Harrington said. “[I’m] pretty sure they took some lines from the book. I like that they opened with the opening line of the book. That was really cool.”

Leda Douglas, who played Elizabeth Bennet, narrated the story, and Harrington said this artistic choice allowed for a thorough representation of Elizabeth’s character.

“They definitely enunciated certain parts of Elizabeth’s personality, like the wittiness and sarcasm,” Harrington said.

Harrington also liked Conner Keef’s depiction of Mr. Darcy, she said. In the book, Mr. Darcy seems rude. Keef, however, portrayed him as more awkward than rude, which allowed the audience to have a higher opinion of him right from the beginning of the story, Harrington said.

First-year Zachary Gamble appreciated the acting in the show, especially the ability of the actors to seamlessly transition between their various roles, he said.

“I’m sure it’s difficult to do that, but it worked out very well in most cases,” Gamble said.

Gamble watched the 2005 film “Pride & Prejudice” and thought the Aquila production was a more accurate interpretation of the original novel, he said.

“The way they transition from scene to scene was really clean,” Gamble said, “And also the way they had the characters interact with each other. It was just like the book pretty much.”

Sanchez has also been impressed with the cast’s performance, she said.

“I definitely marvel at their ability to transform into different characters, to learn two shows in repertoire in a short amount of time and to have given themselves so much to this creatively and collaboratively,” Sanchez said. “It’s a really tight, fun group, and that in and of itself is just fun to watch unfold on stage.”

Visit the Center for the Arts website for information about upcoming events in Smothers Theatre.