An evening with K-pop star G.Na 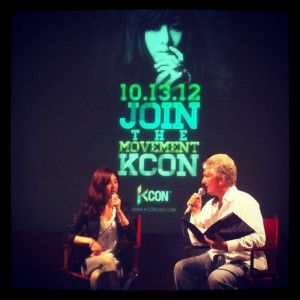 On Sunday night, Pepperdine welcomed its first ever K-pop guest artist, G.Na, presented by the Pepperdine Korean Student Association and the Center for Media, Entertainment, and Culture.

G.Na, whose real name is Gina Choi, was in town for K-Con 2012 and had performed in the Verizon Amphitheater in Irvine on Saturday night. Other performers at K-Con included K-pop groups 4Minute, Vixx, B.A.P., Exo-M, and Nu’Est.

G.Na, who was born in Calgary, Canada and raised in Vancouver, shared with students that she had decided to become to venture into K-pop after seeing a poster for a K-pop artist one day in Korea-town in Vancouver. Prior to becoming a K-pop artist, she was a country singer singing gospel music in her church in Canada. “I was so white-washed that growing up, I thought I was Britney Spears. You could say she was my biggest inspiration,” she said.

She shared her struggles to learn Korean having grown up in the Canadian countryside and only became fluent after spending seven straight years learning the language. Although she is much better, G.Na admits she still struggles with the language and has hesitations about acting in Korean dramas. “I’m afraid I’ll be given these lines to memorize and the words just won’t come out,” she said. “I would love try it one day, but I’m just not ready right now.”

But amidst all her crazy schedules, she said the one thing that holds her together is her faith. “I have been going to church all my life, and it’s not going to change even if I just because I become a K-pop artist. Faith plays the biggest role in my life, and it always will.”

G.Na released her debut EP “Draw G’s First Breath” in July 2010. She also released her third album “Bloom” in May this year, in which she co-produced and wrote a few of the songs. More details about her latest album can be found here.

Updated at 9:10pm (October 18th) The victim has been identified as Marisela Echeveria, according to a Los Angeles County...
Copyright 2013 Jupiter Premium Magazine Theme
Back to top