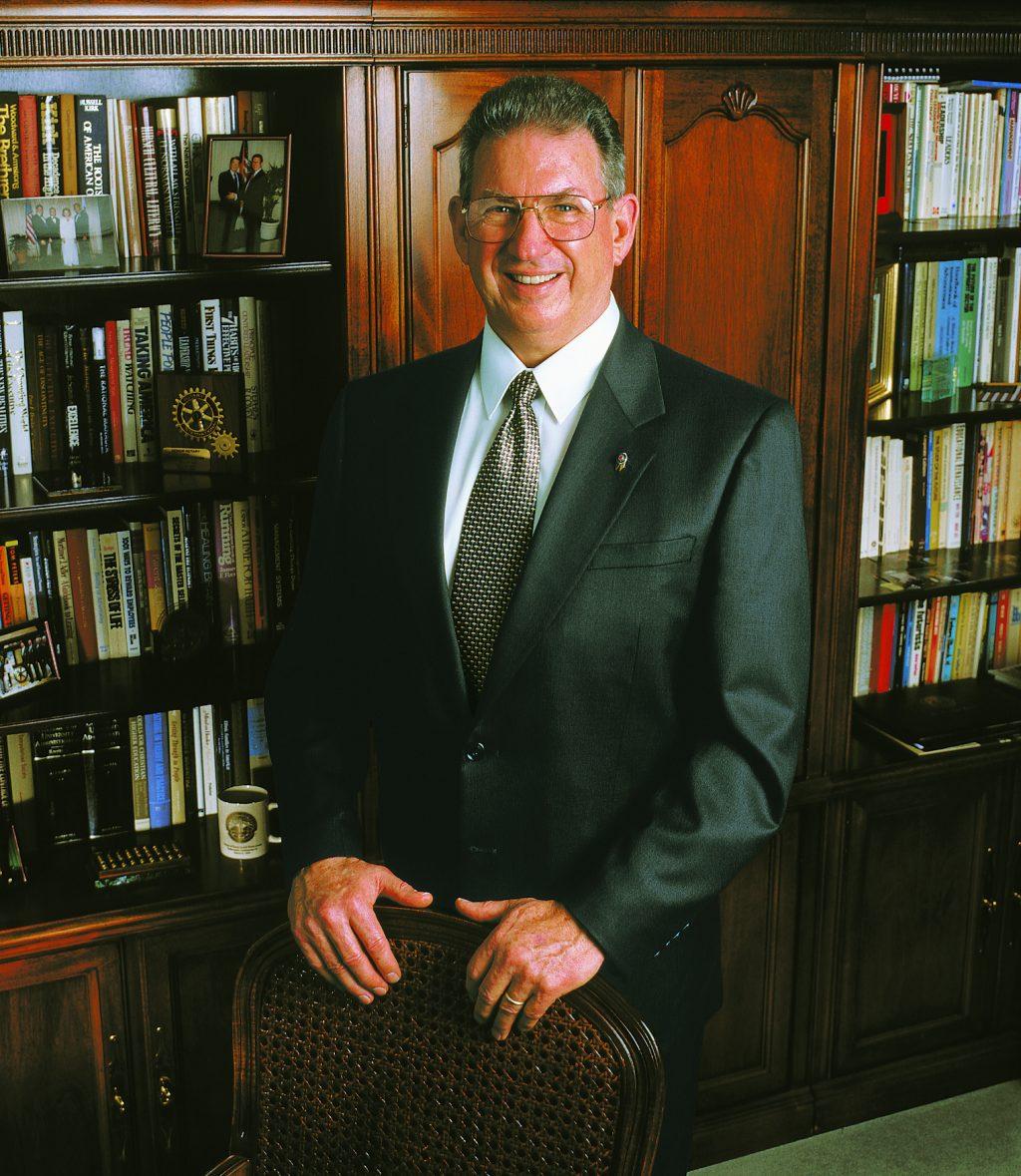 Lawrence Hornbaker served Pepperdine for 33 years and raised money for many buildings on the Malibu Campus, the Public Relations office wrote in a Jan. 9 email to the Pepperdine Community. Jim Wilburn, dean emeritus of the School of Public Policy said Lawrence could be friends with anybody. Photo courtesy of the Public Relations Office

“Larry did not have an enemy in the world,” said Jim Wilburn, dean emeritus of the School of Public Policy. “He just was one of these people that everybody trusted and loved and was friendly, but he also was able to sit down and ask somebody for a million dollars.”

Wilburn said he has been a part of Pepperdine for nearly 50 years. When he was the chief operating officer of the L.A. Campus, Lawrence was vice president — the first time the two worked together on a daily basis.

When Wilburn became vice president of Events, he said Lawrence had an office near him, and the two were part of the team that started the Pepperdine Associates.

“That’s where I first first encountered him, and we got to be very good friends,” Wilburn said.

The two became good friends — Lawrence performed a wedding ceremony for Wilburn and his wife 25 years ago, Wilburn said.

Wilburn said Lawrence was loyal and dedicated to Pepperdine.

“If the president needed somebody to go talk to a bank about a loan, [Lawrence] could do that,” Wilburn said.

Lawrence helped raise money for the Provost’s house, the Appleby Center, Smother’s Theater, the Harnish Law Library and Residenza Tagliaferri in Florence, along with his wife, Carol, Wilburn said.

Many locations on campus were named after those who donated money or served the University in some way. In front of Payson Library, near Smother’s parking lot, there is a tree named Jerry’s Tree, Wilburn said.

“When [Lawrence] was going to retire, the president asked him, ‘What would you like to have at Pepperdine to honor in memory of your work here?'” Wilburn said. “And I think Lawrence said ‘Well, just plant a tree.'”

On upper campus, there is a tree in the roundabout between Heroes Garden and the Villa Graziadio Executive Center dedicated to Lawrence, Wilburn said. It includes information about Lawrence’s time at Pepperdine.

“So there’s Jerry’s tree near the theater, and there’s Larry’s tree up here,” Wilburn said. “But I think very, very few people park there, so [they] don’t really stop and notice the plaque.”

The tree, Senior Vice Chancellor Rick Gibson said, is a great symbol of who Lawrence was because it will continue to grow like Lawrence — deliberately and one day at a time.

“He worked a lot like the way I hike,” Gibson said. “He plodded one foot in front of the other.”

Pepperdine People, Gibson said, was primarily for donors. When creating the magazine, he would look for pictures of notable people to include.

“Always, always, I found pictures of Larry and often his wife Carol in the background,” Gibson said. “They were never the focus or the center of the photograph, but they were always in it.”

While never in the spotlight themselves, Gibson said, Lawrence and Carol would never forget a donor.

“They truly were caring for elderly donors in their later years, in really challenging situations as they aged,” Gibson said. “They would give them rides, they would clean their homes, they would take care of them.”

Gibson said Lawrence would defer to members of the magazine staff in most cases, and while he gave suggestions, he would never tell the staff what to do — except if it involved a donor. In one particular project, Gibson said Lawrence noticed there was a donor’s name misspelled in an already printed newsletter.

“It wasn’t a ton of money because it was a newsletter, not a magazine, but he had them all tossed, and he said ‘We’re not going to send this out by getting the name wrong,’” Gibson said. “‘The least we can do is know the name of the person who has been supportive of us.’”

Lawrence and Carol, Gibson said, made the friendships between Pepperdine and its donors, and demonstrated that the friendship was “real” and not purely transactional.

“Larry made sure that Pepperdine never forgot people,” Gibson said. “And that is not an exaggeration. That is the work. That is what Larry did.”

Gibson said Lawrence set an example of being active in the greater L.A. community, and a philosophy that “friendships must be authentic.”

“If Pepperdine were to honor Larry, it would recommit itself to never forgetting those who have supported it,” Gibson said. “Whether it is a donor, a faculty member, a student — I mean, that has to be part of our ethos. And Larry wasn’t the only one who did this, but Larry exemplifies it in a remarkable way.”