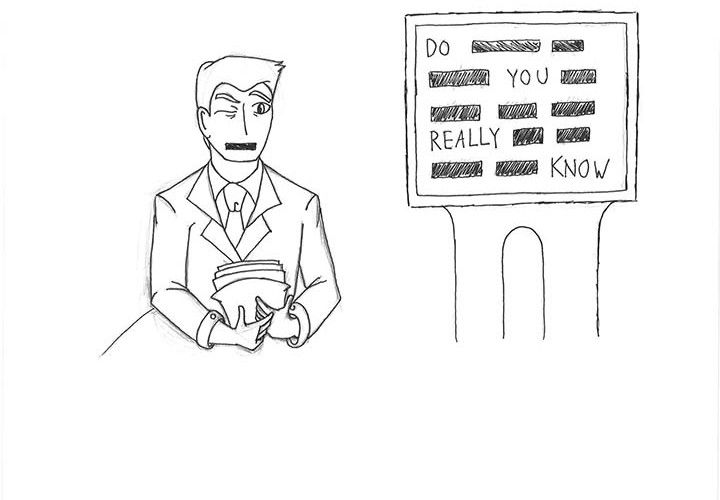 Picking up your phone, you tap the Facebook icon, and scroll through your news feed.

CNN has an interview about the rise in police violence. Cat video. Someone shared a Fox piece about some new abortion bill, and there’s an argument brewing in the comments section. #Jenner is trending. Baby video. Your friend posted something on your wall; it’s John Oliver’s video on mega-churches. You lean back in your chair and watch the whole thing through.

Entertainment, breaking news, legislation, government, corruption and cats; the liberal, conservative and mindless views — all in the span of half an hour. But it wasn’t always like this.

News was once reserved for the evening, when a stately male anchor would dictate the day’s events to a listening audience, or for mornings when the paper was delivered. But this was a simpler time, when few options for news consumption was coupled with more trust in the available choices. According to a 2014 Gallup poll, “Trust in Mass Media Returns to All-Time Low,”American trust in the unbiased nature of news media has decreased 6 percent for both Republicans and Democrats over the past 50 years. Gone are the days when anchor Walter Cronkite was not only the deliverer of the news but also “the most trusted man in America.” There isn’t a Cronkite-like figure anywhere in the news today. Instead, we have the likes of Brian Williams, who earlier this year admitted he had lied about his war exploits.

Nowadays, news is so obviously split along political lines it’s almost laughable. People go to Fox News for the right-leaning perspective and to sources like MSNBC for the left. This split of news consumption can even be seen as a split among the different generations alive today. According to the Pew Research Center’s 2015 study of age ranges and trust in news media, Baby Boomers are the only group who find Fox News more trustworthy than not, while Gen Xers equally trust and distrust it. Millennials, on the other hand, are the only group who found satirical news sources such as “The Daily Show” and, formerly, “The Colbert Report” more trustworthy than not.

And maybe that generational split is saying something. Where each group puts its trust for the truth is important. Turn on the television or go on social media after any sort of national or international crisis. At times, it feels as if you’re learning about completely different events when everyone is covering just one. For example, on the topic of gay marriage, you can expect to hear how it’s good for society from MSNBC, while from Fox, you may learn about how it’s merely a precursor for polygamy and bestiality.

Through cable news, you’re more likely to see what fits the station’s political leanings. On social media, you’ll see the photos on the scene as people post them, and with those, you’ll see the responses. But those posts often ignore the bigger picture. Wait a little bit, and you’ll watch what satirical comedy shows like John Oliver have to say about the matter. This mishmash of information and opinions often leads to questions: Where is the real news? Where is the truth? What is truth?

And maybe the last question is exactly what’s needed to be asked. According to journalist Patrick Cockburn, his father Claud Cockburn was known for saying that there are, in any news story, an infinite number of facts, and that it is the judgment of the journalist to decide which are significant or insignificant. He claimed that, essentially, all stories begin backward, beginning with the journalist’s take on the issue and only then searching for whatever facts he or she considers important. It’s up to us as consumers to disseminate the knowledge and figure out for ourselves what is fact, fiction and propaganda.

There’s a theory in communication known as “selective exposure theory.” It states that individuals tend to favor information that reinforces their previously held beliefs while avoiding any contradicting information. That, coupled with the theory of “confirmation bias,” which states that people tend to search for and interpret information in a manner that confirms one’s preconceptions, explain the manner in which people look for their news. Individuals who are more left-leaning are more likely to search for more left-leaning news, and vice versa.

Now more than ever, people are able to search for and report the news, and it’s more democratic. The field is more open for opinion pieces we both sides of the political aisle and all ages. Maybe it’s through a more holistic approach, reading pieces you don’t agree with or watching what doesn’t seem to make sense, that we can better understand the news and the issues of the world today.

There’s no way to return to a Cronkite era of good, seemingly unbiased news, but maybe that’s the change the news needed. It’s been democratized. There are not only news sources that everyone will agree with, but also ones people won’t. Maybe it’s reading through the latter that will lead to a better understanding of the world at large.

Aristotle once said, “It is the mark of an educated mind to entertain a thought without accepting it.” With more voices in the arena of news and more points of view being spread, this quote only becomes more powerful. The news now offers the ability to listen to both sides of the aisle. Now more than ever, we can hear what the other side of the political spectrum or age group has to say. This, I feel, ultimately leads to a better understanding of our world today, which is really what the news was meant to do in the first place.

If Trump Gets the Vote, I’ll Jump Ship 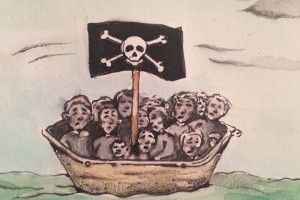 Art by Christine NelsonWhen I think about the crisis in Syria, like most others, my heart stops and my stomach sinks. Sadly,...
Copyright 2013 Jupiter Premium Magazine Theme
Back to top