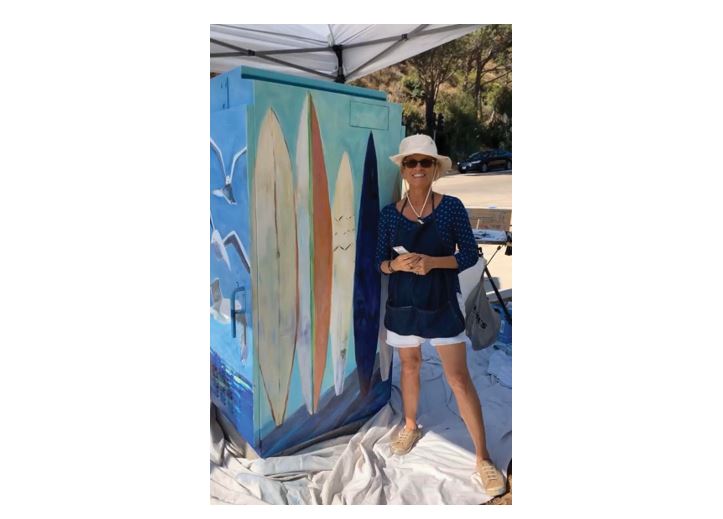 Seaver alumna Shannon Celia (Class of 1989) is a professional artist and the founder of the Pepperdine Alumni Art Showcase. Recently, Malibu’s Cultural Arts Commission selected Celia to paint a utility box for the City of Malibu’s public art initiative, along with two other artists.

“I was so excited because I paint a lot of coastal themed seascapes and landscapes, so I was like, ‘This is in my wheelhouse. I can do this,’” Celia said.

Celia said she found out about the City of Malibu’s call to artists to paint utility boxes in the city from her friend.

Having had previous experience painting utility boxes a couple years ago for the City of Oxnard, Celia said she was excited to paint another one in Malibu because of her strong ties to the city.

“When I heard I got it, I was over the moon,” Celia said. “I know they had a lot of applications, and they were only able to choose three artists to paint four boxes, so it was pretty exciting.”

Celia’s box is “Malibu-inspired,” and she called her utility box “Miraculous Malibu.” She said she painted coastal-themed seascapes on the box, and she included surfboards, seagulls and ocean waves. 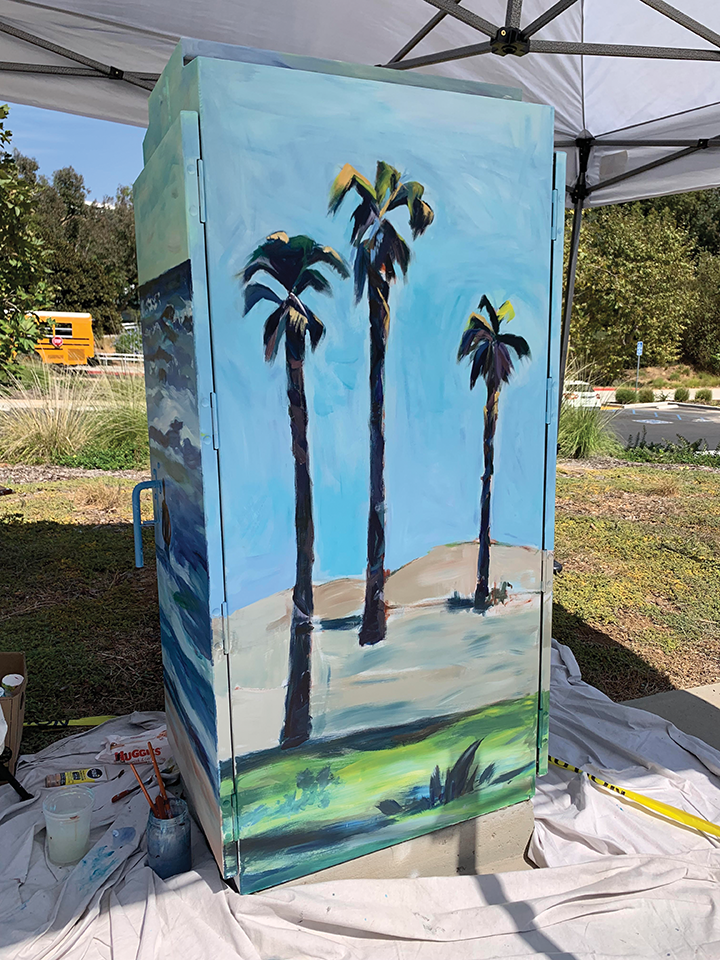 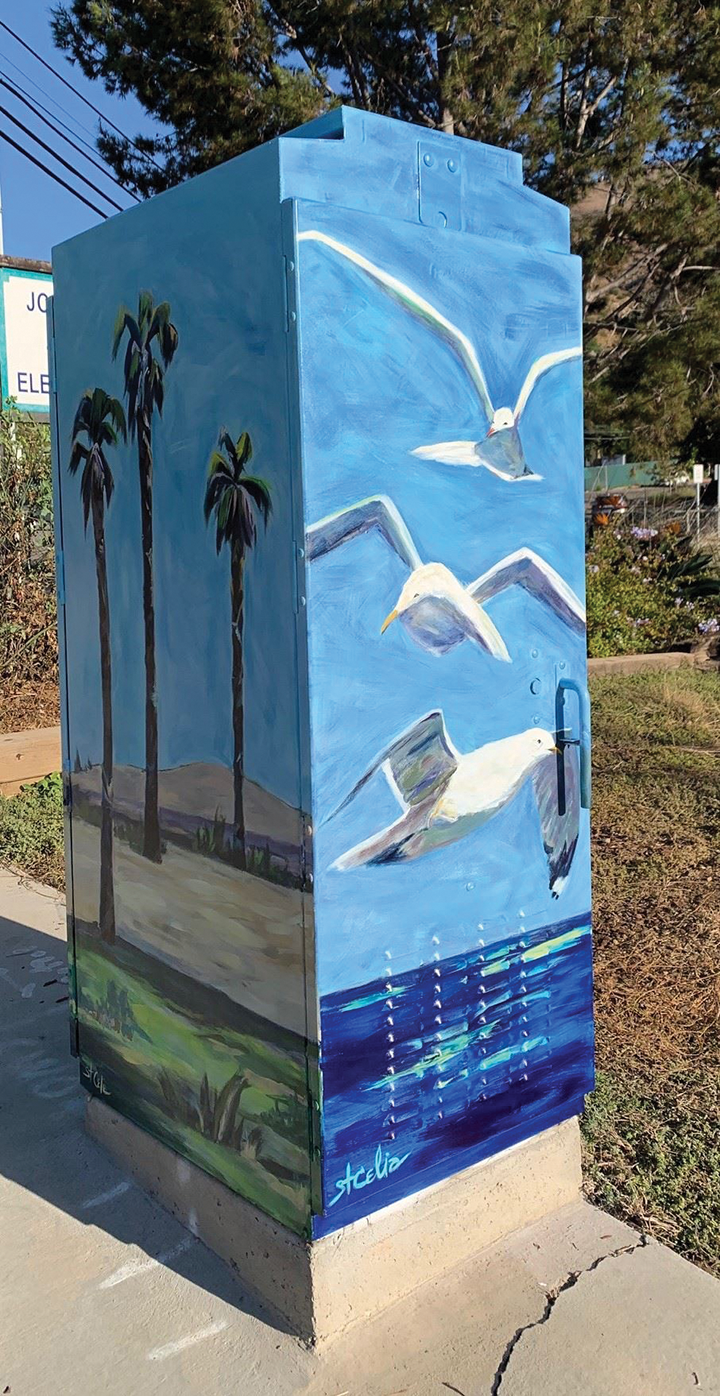 Celia said living in coastal New England with her uncles inspires her love for painting seascapes.

“I grew up with two uncles who were lifeguards back east, so I’ve always been attracted to that kind of themed art. It brings back such great memories of my childhood,” Celia said.

Celia said she hopes that the painted utility boxes will spread some joy to the people of Malibu and more.

“I like to paint the gritty with the pretty, and I thought if this project isn’t the epitome of that, I don’t know what it is,” Celia said. “I love taking this beast of a utility box that maybe people don’t even notice and turn it into something that makes people hopefully stop and say, ‘Wow, look at that.’”

Celia graduated with a bachelor’s degree in journalism with an art emphasis at Pepperdine.

She said she has always been a writer.

“I grew up writing songs; I shifted to writing for children and doing a little work in the journalism field,” Celia said. “I love hearing people’s stories, and I love the idea that a picture is worth so many words.”

Celia has had several of her children’s books published. Her most recent book that is still selling is titled “ABC’s of the Sea.” 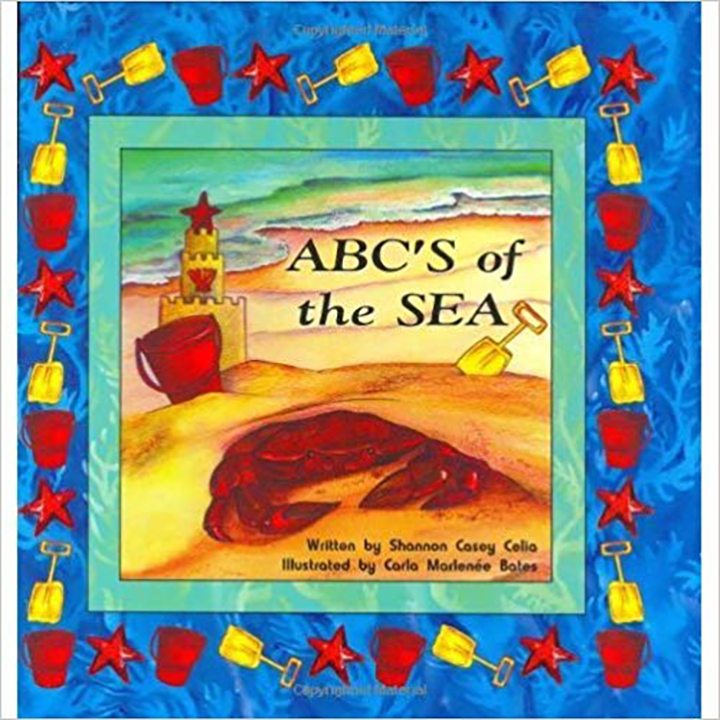 Celia said she also loves how the utility box the City of Malibu awarded her is located near Webster Elementary School and Our Lady of Malibu School because of her passion for writing children’s books.

“I love introducing kids to art and music and reading; they’re all passions of mine,” Celia said.

Discovering a Love for the Fine Arts

Celia said being an artist has helped her feel connected to others in a way that goes beyond the literal words being spoken.

“I really have always felt that art and music are universal languages,” Celia said. “I like to think that when we artists make art, we can do it in a way that can kind of transcend those differences between people and cultures.

Celia said she grew up with a passion for the arts. She always enjoyed playing music and singing, but it was at Pepperdine, where she discovered her love for painting.

“When I got to Pepperdine, I was really blown away by the care that the professors and my adviser [Prof. Ken Waters] had to guide me and help me figure out what my gifts were,” Celia said.

At first focused on becoming a professional musician, Celia said she realized after taking her first art class with art Professor Joseph Piasentin that painting was her true calling.

“It was in that first class with Joseph Piasentin that I got a brush in my hand and … I was like, ‘I didn’t know I could paint!’” Celia said. “And so it was pretty obvious my first semester in an art class that I had found my true calling.”

Executive Director of Crest Associates and alumna Heidi Bernard (Seaver College, 1985) said she came to know Celia when they attended the same church in Agoura Hills and became friends through singing on a worship team together. They also bonded over being Pepperdine alumni.

Bernard said Celia has been involved with and given back to Pepperdine in many ways since she graduated. For example, she has volunteered for Pepperdine’s Center for the Arts many times and has recently been commissioned to do a painting of Pepperdine. 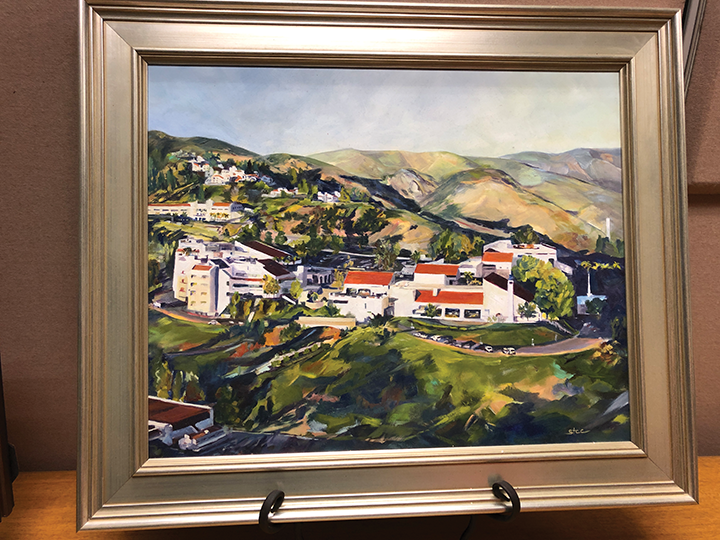 Bernard said the main way Celia has given back to Pepperdine since graduation was her founding of the Pepperdine Alumni Art Showcase. One day, Celia had shared with Bernard an idea for an Alumni Art Showcase, which combines Celia’s passions for art and Pepperdine, and Bernard decided to help Celia achieve her idea.

“It was a partnership with Shannon’s concept, her time and energy, Seaver Alumni Relations, the Payson Library, and then my office, Crest Associates,” Bernard said. 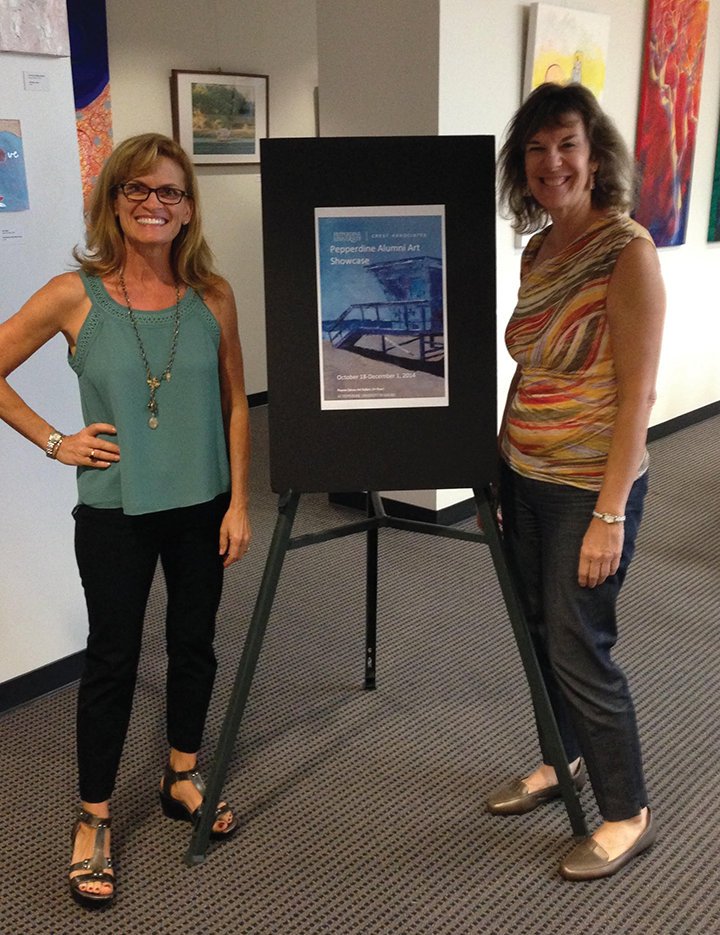 Bernard said even though she’s not an artist, she considers herself a creative person who very much values the arts.

“I think the arts are an actual expression of people,” Bernard said. “I think it’s part of being a human being, and it’s good to have expression, and it takes many forms.”

Regarding Celia’s recent work on the utility box in Malibu, Bernard said she is very proud of Celia.

“I appreciate how she looks to combine her passion and how she can give back to the university, and I’m just grateful to her for that,” Bernard said.

Alice Tsay, former director for library programming and public affairs for the Pepperdine libraries, collaborated with Celia to bring the third Alumni Art Showcase to Payson Library in 2018.

Tsay now works on special projects for the president at The Huntington Library, Art Museum and Botanical Gardens.

“The two of us laid out and hung up the exhibit with help from some other wonderful staff, students and even alumni,” Tsay wrote in an email. “Shannon has hung many shows in the past, but this was the first time I had done an exhibit of any kind, so it was great to learn and laugh alongside her while figuring out how to get all these wonderful pieces of art up on display.”

Tsay wrote that she is also a fan of Celia’s art.

“I love that Shannon’s art is so deeply rooted in a sense of place, especially of the California coastline,” Tsay wrote. “Her paintings convey her exuberant personality and attentiveness to the world around us in such a compelling way.”

Celia said the Pepperdine Alumni Art Showcase is now a tri-annual showcase at Payson Library and includes an opportunity for art students to ask questions to a panel of Pepperdine alumni who are professional artists.

“[The showcase has] been an amazing way to get alumni artists together,” Celia said. “Art students will always be able to see that after they graduate, they can participate in this super cool show.”

Celia said a piece of advice she has for aspiring artists is to find a mentor and decide on the kind of career they want to have.

“I think it really helps to find someone that you admire or you’d like to learn from,” Celia said. “I think it always helps to join a professional organization, wherever you live to kind of get plugged in.”

She said she also encourages aspiring artists to hone their individual artistic voices.

“I believe in lifelong learning and always reaching and being brave and pushing yourself to do hard things,” Celia said. “And a lot of divine intervention. I definitely believe that.”

Next year, Celia has an upcoming solo Santa Paula Art Museum exhibit titled “Santa Paula Sojourn.” She said she is painting 35 to 40 large pieces for this show. The opening reception is Saturday, May 16 at 4 p.m. 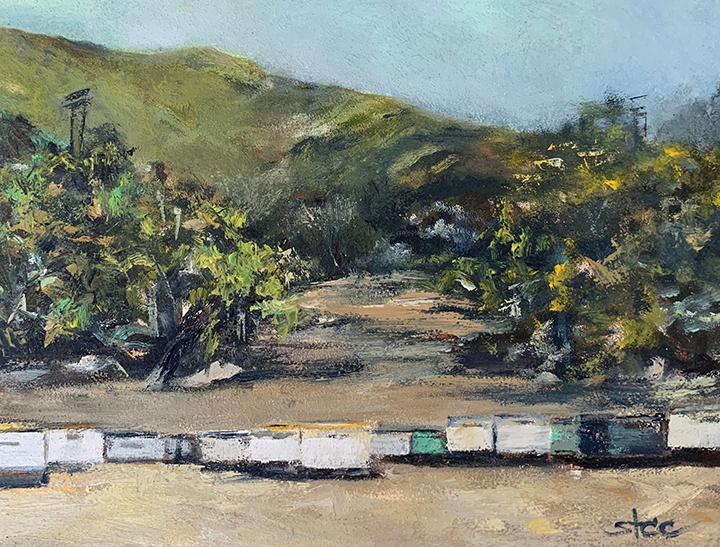 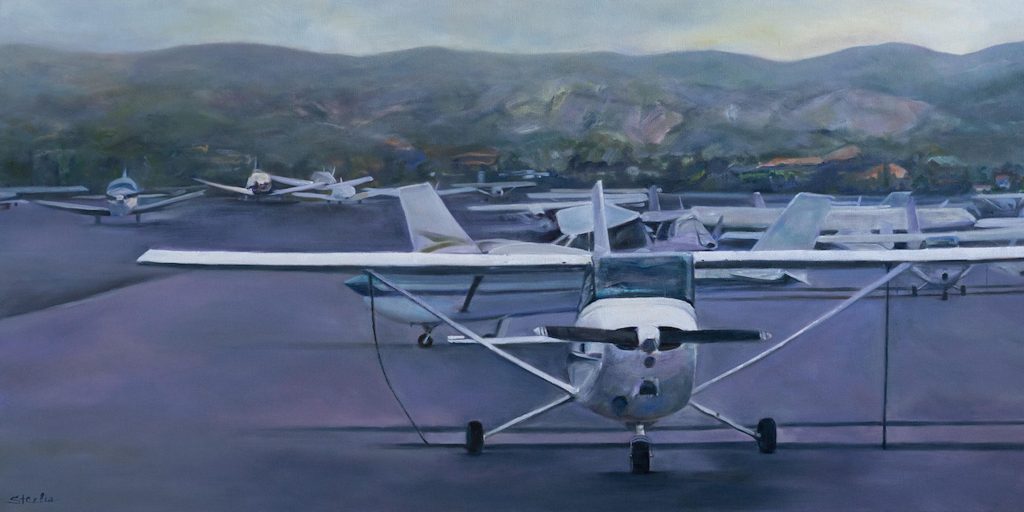 Celia said she recently finished up a series called “Odyssey through Oxnard” and became the first artist-in-residence at the Channel Islands Maritime Museum, where she taught a class for children and an adult sketch class.

“I think it was kind of all that work that led to my upcoming Santa Paula show, so I’m really thrilled with that,” Celia said.

Celia said her art will also be in Santa Paula Art Museum’s upcoming “Art About Agriculture” Annual Show, which runs from November 2019 to January 2020.

As an artist, Celia said she feels a lot of gratitude.

“Being an artist, I feel grateful that I can wake up every day and go in my studio and use the things that God gave me,” Celia said. “I feel grateful to be able to use the tools in my box to hopefully spread a little joy in the world.”