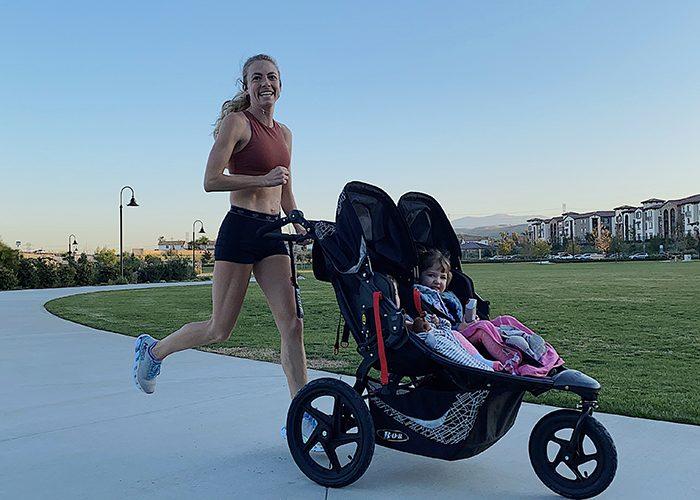 Lauren Floris runs an afternoon double with a double stroller carrying her daughters Liv and Marigold. Floris trained for the Olympic Trials Marathon following the birth of her daughters. Photos courtesy of Lauren Floris

Lauren Floris toed the line at the California International Marathon (CIM) on December 3, 2017, attempting to do something she had never done.

Having given birth to her first daughter, Lavinia, the previous July, Floris kept her expectations low.

“I tried not to go into [CIM training] with a goal because I still hadn’t broken three hours yet,” Floris said. 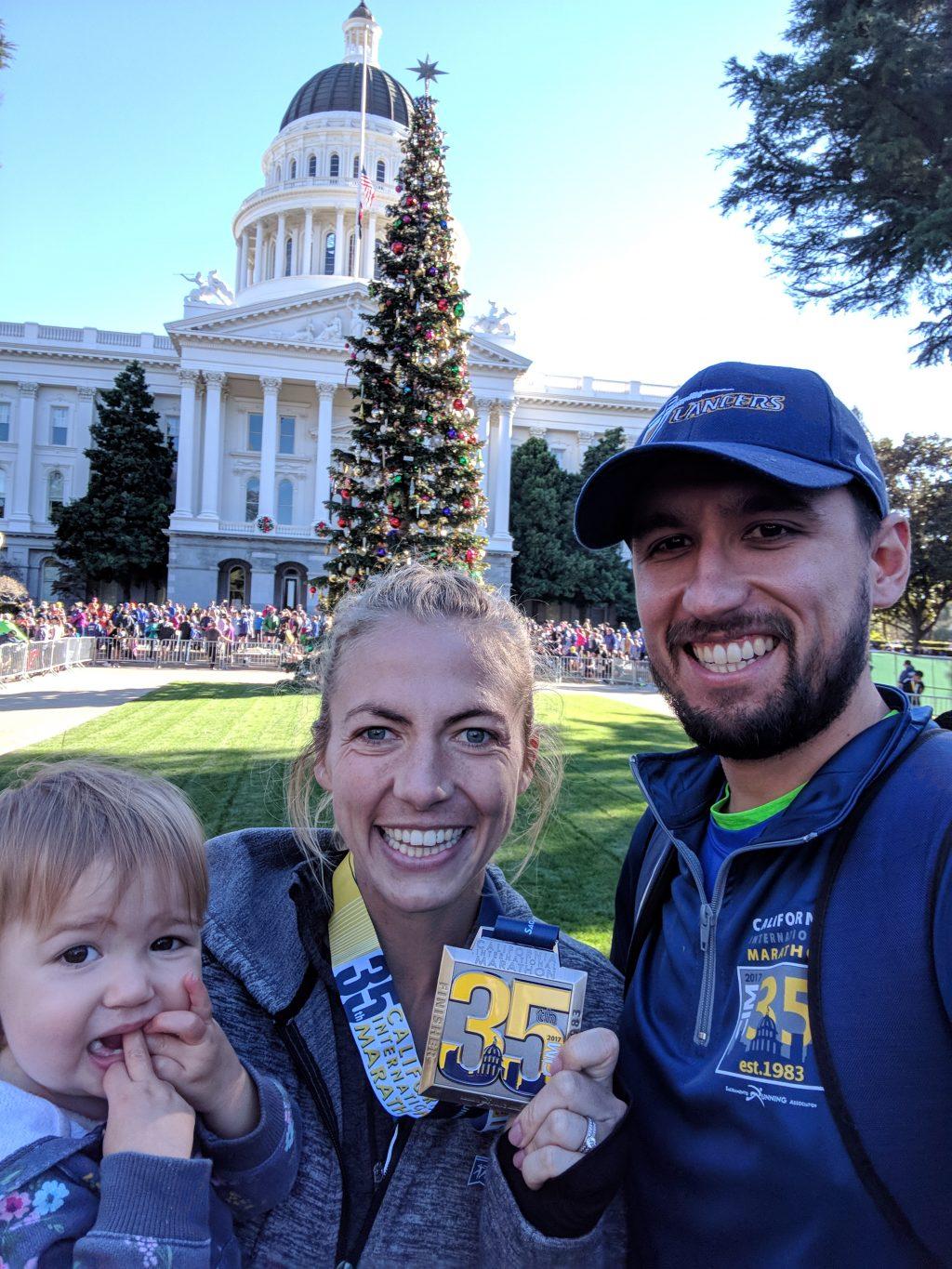 Floris, flanked by her daughter Liv and husband Henri, shows off her CIM medal in front of the California State Capitol in Sacramento. Floris' 2017 CIM race remains her personal best in a marathon.

The best prize was not the exact time but going under 2:45:00 — an Olympic Trials qualifying mark. Floris had earned an opportunity to compete at the Olympic Trials Marathon in February 2020 in Atlanta.

Floris, now 29, fulfilled a dream of many long-distance runners Feb. 29 on the roads of Atlanta, competing with a chance to make the Olympic team in the marathon.

“It was really cool because when I walked into the hotel to check in and get a key for my room, I’m walking through and I saw Abdi [Abdirahman] and Des [Linden] and all these people that are famous and I’ve looked up to and watched on TV,” Floris said. “They’re all there in person, and [I’m] doing the same thing as them, which is kind of cool.”

Abdirahman finished third in the men’s race the following day, making his fifth Olympic team, while Linden finished fourth in the women’s race, just 11 seconds short of making the team. 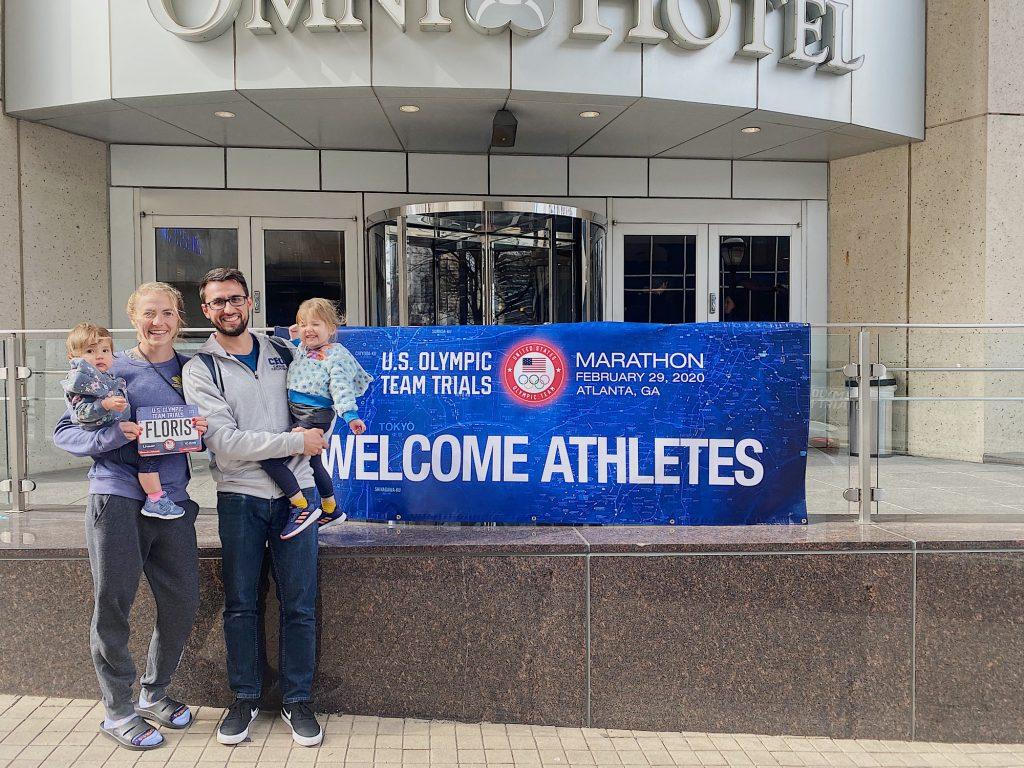 The Floris family poses in front of the athlete hotel in Atlanta.

Leading up to the race itself, Floris underwent a uniform check, water bottle check, tech meeting and time spent meeting friends from over the years who had also qualified for the Trials.

“It was just a cool experience to be treated like a professional athlete,” Floris said.

In the nation, 511 women qualified to run the race, a record high number. Only 390 finished, as some did not start and tough conditions caused many of the favorites to have a bad day. The course in Atlanta, which included three eight-mile loops and a two-mile stretch to the finish line, featured 1,389 feet of elevation gain.

“There was always up or down; there was not really any flat,” Floris said. “I’ve never experienced anything like that where your quads and your hamstrings are just so beat up because you are going up so fast and you’re going down so fast.” 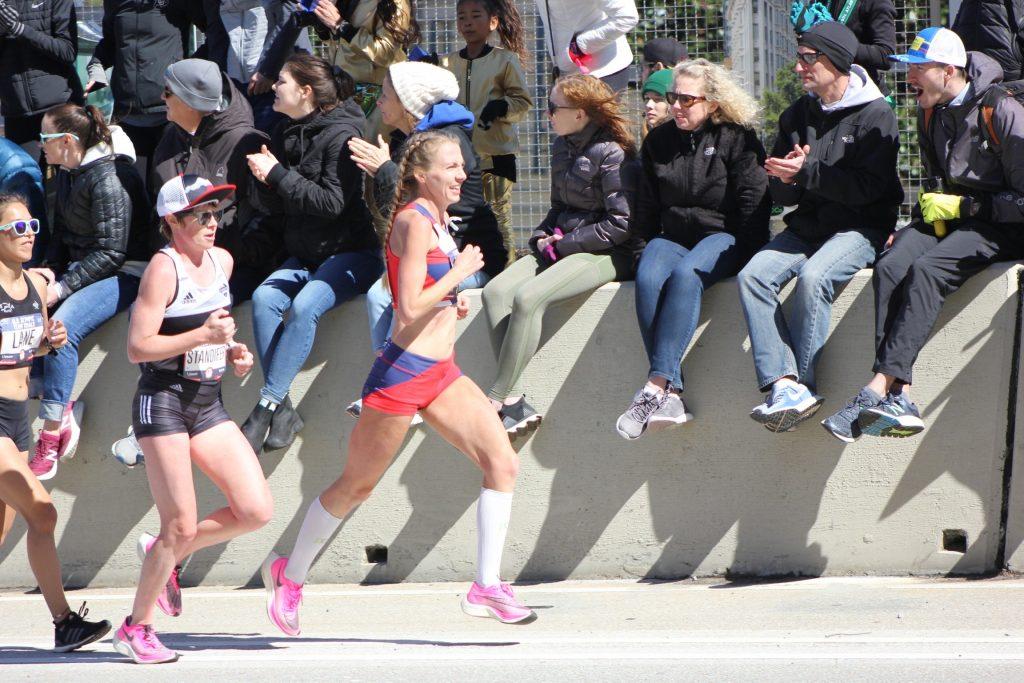 Floris (red-and-blue shorts) races the Olympic Trials Marathon in Atlanta as a large crowd cheers her on.

Despite the hilly course, Floris finished with a time of 2:54:04 (6:39 per mile), good for 298th place. The banked roads and potholes were also a challenge, and though the weather conditions (sunny and chilly) seemed ideal for a marathon, wind gusts up to 20 miles per hour provided a stiff test.

“What I found more difficult was actually the wind,” Floris said. “The wind was really hard because I was in no man’s land for a lot of the race. I never really packed up with anybody because the first little bit of the race I was trying not to get drawn along with the pack.”

Despite some ankle pain following the race, Floris has since returned to training, hungry for more.

How She Got Here

In the nearly eight years since Floris graduated from Pepperdine in 2012, she got engaged and married, worked in accounting, returned to running, earned a master’s degree in kinesiology, coached running, started a podcast and gave birth twice between running marathons.

Floris, whose maiden name is Lodge, blossomed as a runner when competing for the Waves, as her 5,000-meter personal best improved from just under 20 minutes in high school to 16:54 as a senior at Pepperdine.

That mark still stands as a Pepperdine school record, as do Lodge’s marks in the cross country 5K and the 1,500, 3,000 and 3,000-meter steeplechase races on the track.

Lodge studied abroad in Florence during the spring of 2010 and ran during the week. Though she did not train hard in Europe, she went on to have her best season as a junior. A stress fracture to her femur in 2011 caused her senior year of running to be more difficult.

Following graduation, Lodge engaged and married Henri Floris, her former Pepperdine teammate. She soon went back to her running roots, which began when she watched the start of the Boston Marathon in her hometown of Hopkinton, Massachusetts.

“Because I had been so frustrated my senior year, I was like, ‘I just want to go run something that’s new and fresh and pretty much a guaranteed [personal record],'” Floris said. “So that’s how I got into doing the marathon.”

Her next goal was breaking three hours, which she would not achieve until CIM, more than four years later.

“That was a goal that a lot of women had out there that seemed attainable,” Floris said. “That’s kind of where I was focusing my training for the next couple years.”

She began coaching at Orange Lutheran High School in 2015 and then coached at Cal Baptist from 2016–2019, allowing her training to intersect with her career.

After giving birth to Lavinia, nicknamed “Liv,” in 2016, the runners at Cal Baptist encouraged Floris to attempt some shorter races.

She joined Rabbit Elite, an elite group of semi-professional runners and ambassadors for rabbit brand apparel, in August 2017 and promptly ran 16:57 for 5,000 meters to win the UCSD Triton Invitational in April 2018. It was Floris’ first time running under 17 minutes for the 5K since college.

“I felt a little lost, I think, in the post-collegiate running,” Floris said. “I didn’t really have guidance; I didn’t know what to do.” 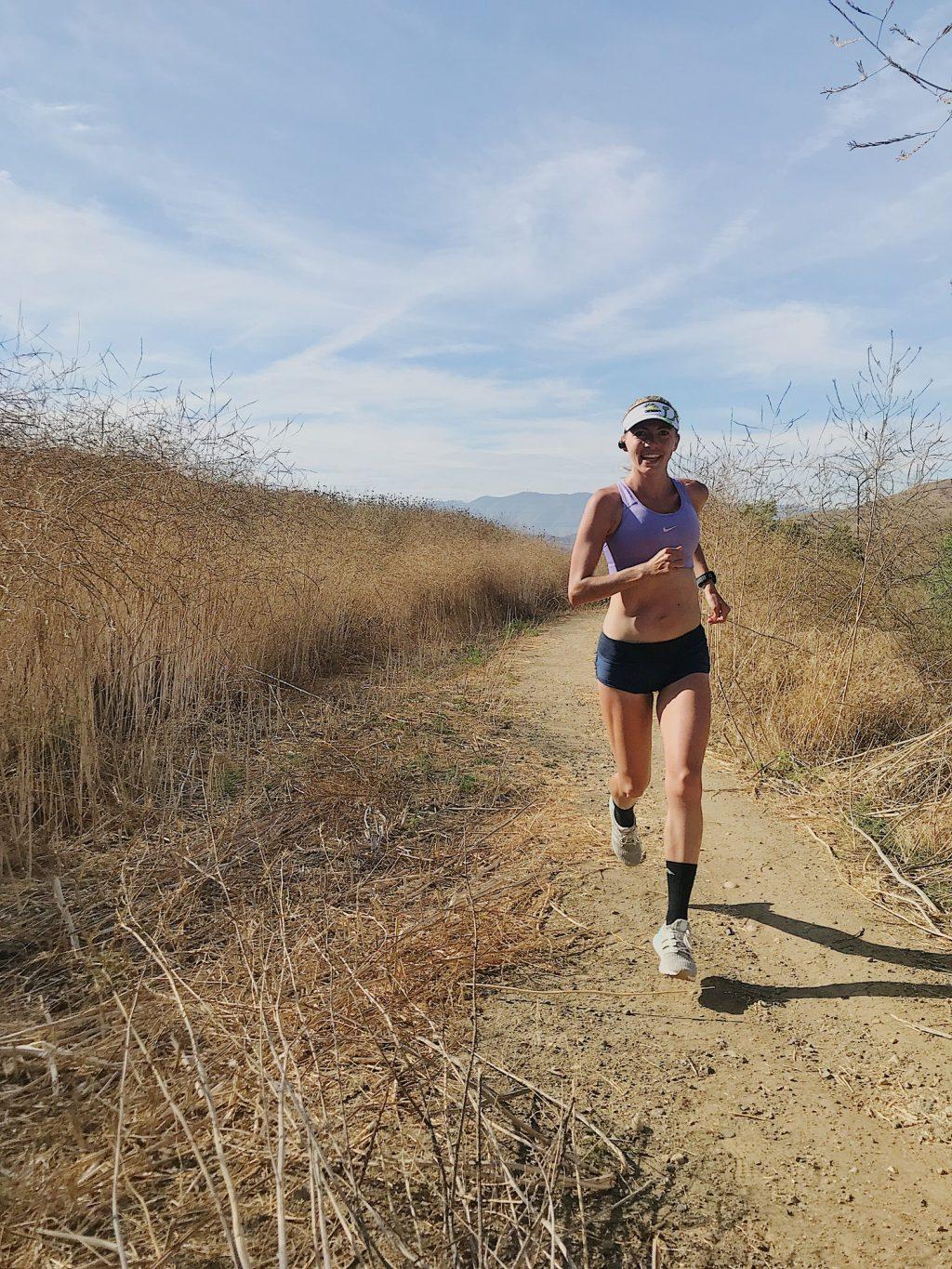 Floris goes for a run during a training session in Chino Hills State Park.

She is now coached by Ben Bruce, who also coaches the professional HOKA NAZ Elite team. Bruce gave Floris an abbreviated training plan for the Olympic Trials, since she ran a marathon in November 2019, only 10 months after giving birth to her second daughter, Marigold.

“We kept things low key, I would say, for the Trials,” Floris said. “Just because I was only 13 months postpartum and it’s such a tactical race.”

Running during and after pregnancies is one of Floris’ specialties in coaching now. She is a USATF Level 1 Certified Coach and co-hosts a podcast called “Up + Running” with other athletes and coaches in Southern California.

“During both of my pregnancies, we kept things low key — just easy running, really low mileage — compared to what some other women do,” Floris said.

Running in the Age of COVID-19

Though all running races in the near future have been canceled or postponed due to the coronavirus pandemic, Floris continues to run (usually alone), coach remotely and produce podcast episodes.

Floris had some advice for experienced and new runners during the COVID-19 quarantine. Though virtual races and time trials are options, and runners can still train hard if they choose, the lack of races has caused some to lose motivation.

The Tokyo Olympics have been postponed to the summer of 2021, so even the best runners in the world are playing a waiting game.

The six runners who qualified for the United States marathon team will have to wait 16 full months before they race in Sapporo. If Floris was their coach, she would have them race again during that time but make sure to avoid injury.

“I definitely wouldn’t want them to not run another marathon until the Olympics, but the focus, the main goal, would be to get to August 2021 healthy,” Floris said.

Floris continues to work from home, and Henri also can continue his job in TV production from the family’s Chino Hills residence.

“We’re just glad that he has a job, that my job is something I can do from home, and that our girls are already home,” Floris said. “We’re doing our best, and I’m just trying to support my athletes as best I can.”

The family dealt with a scare in the past few weeks, as Henri was tested for COVID-19. Though Lauren and Henri were grateful for the test, it took 10 days to get the results, which their daughters Liv (now 3-and-a-half) and Marigold (14 months) did not understand. 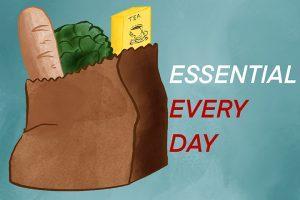