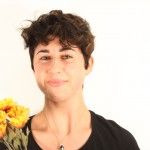 After considering the success of innovators, I cut out time to whip up my own visions for the future. As the ice melted in my glass of water and the sun began to set, an idea emerged. Finally.

There are various sects around the world that have their own way of life that goes against the “norms’ of society.

One, notable for their delicious ice cream, got right to it back in the 1690s.

The Amish broke off from mainstream society and have been at it, churning their butter and steering their buggies, for a very long time. Firm believers in simple living and communing with nature, this self-sustaining society of Mennonites may not have wished to save money or save the environment, but the farmers befriend both subjects with their long-term vision of spiritual rewards.

Post WWI, a fad of idealism swept the world as people internationally sought brother- and sisterhood in a future they hoped to build differently, one that deterred from world warfare. In this experimental time, more living cooperatives sprung up, and many adopted idealistic, socialistic philosophies. The then nation-less Israeli’s developed their kibbutzes, collective communities based on agriculture. While simple little endeavors like testing out new ways to raise children and live off the land turned out to be toughies to solve, the many mistakes were overshadowed by their long-term vision: community models placing human cooperation at the pinnacle.

Here at Pepperdine we have ten-fold ways to build community and save money while saving resources. At the Green Team garden, you and a buddy can procure your own plot. Perhaps you’ll grow veggies and trade tomatoes for basil, and before you know it, you’ll be joining forces to make a caprese salad together.

Getting to know Caf workers could reveal useful tips, such as the latest incentive to reduce reusable container waste. Sodexo now offers a 99- cent discount on hot and cold drinks purchased in your own reusable container, as Jimmy told me. Not only has Jimmy the Caf cashier helped me improve my Spanish skills, but he has also helped me understand more about the work that goes into our food, and as a bonus, ways to save a buck or two.

The sophomore themed houses are the latest on-campus realization of global community living situations, where like-minded people come together to live out life the way they believe it could best be cultivated — whether it be through the arts, the outdoors, social action or spirituality.

As my insightful bathroom-mate, Elyse, replied one night after she was asked the dreaded post-graduation question: “We should be living simpler. Without knowing that, I think everyone craves that. Everyone wants to be loved. To have a job that they love. To be able to get away for a bit.” In the spirit of the eco-friendly, cost-effective “staycation,” consider getting away from the norm and investing a little time in the community around you for a whole new experience that will leave change in your pocket for more.

The Voice: Students express their perspectives on their passions

The Voice: Students express their perspectives on their passions

Haven Nutt Senior I’m very passionate about child abuse and pedophilia. I support the law and its system; as people I just...
Copyright 2013 Jupiter Premium Magazine Theme
Back to top