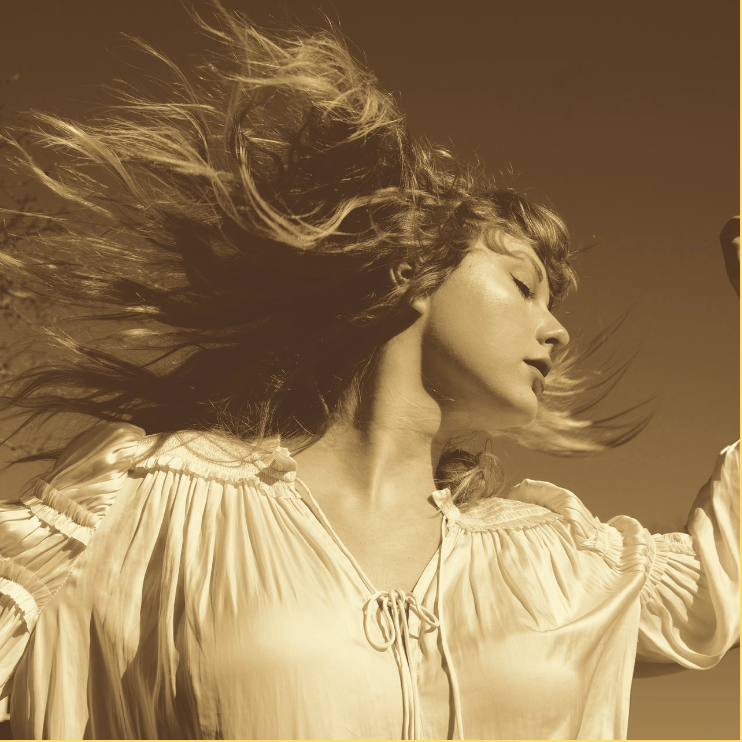 The cover of Taylor Swift’s ninth studio album “Fearless (Taylor’s Version)” shows the singer with windblown hair, pointing her head to the left this time instead of to the right — as she poses on the original “Fearless” album cover. Her new rerecorded album was released April 9.

“Fearless (Taylor’s Version)” has 27 tracks, including 13 tracks from the original “Fearless” album. An additional six re-recorded songs were on the 2009 deluxe version of “Fearless,” called the “Fearless Platinum Edition,” which are included in “(Taylor’s Version).” The 2010 single “Today Was A Fairytale” also made it on.

An additional six “From The Vault” tracks on the album, including collaborations with Maren Morris and Keith Urban, are older, never-released tracks. Swift wrote these songs when she was a teenager but they were not released on the original “Fearless” album. Swift wrote a blog post explaining the “From The Vault” songs.

“Only I know which songs I wrote that almost made the ‘Fearless‘ album,” Swift wrote. “Songs I absolutely adored but were held back for different reasons (don’t want too many breakup songs, don’t want too many downtempo songs, can’t fit that many songs on a physical ed). Those reasons seem unnecessary now.”

According to Billboard, “Fearless (Taylor’s Version)” is the only No. 1 album of its kind: a re-recording of an artist’s — own or another’s — previously released album. Swift produced it under Republic Records, marking herself “Untouchable“ to Scooter Braun and his hold on her masters.

According to NPR, Scooter’s acquisition of her masters was Swift’s “worst-case scenario,” alluding to Braun’s involvement in a number of feuds between her and other artists he has managed, including Kanye West. Swift’s blog post covered the devastating sale in 2019.

“For years I asked, pleaded for a chance to own my work,” Swift wrote. “Instead I was given an opportunity to sign back up to Big Machine Records and ‘earn’ one album back at a time, one for every new one I turned in. I walked away because I knew once I signed that contract, Scott Borchetta would sell the label, thereby selling me and my future. I had to make the excruciating choice to leave behind my past.”

Hence, this re-recorded album gives “Fearless” a new meaning. In an Instagram post about her new album, Swift wrote “It was the night things changed,” alluding to the track “Change” that was originally a tribute to her success with Big Machine Records. The lyrics of the song “These walls that they put up to hold us back fell down,” now carry new meaning, symbolizing Swift taking back ownership of her music.

“Fearless (Taylor’s Version)” is so artfully done that most songs sound very similar to the original versions, just with added depth. According to Entertainment Weekly, the change in Swift’s voice allowed for changes in the production. Individual instruments themselves have less of a thin, country twang and instead have a fuller sound, giving it a more modern feel.

In the original album, Swift just went through a heartbreak, so she sings more earnestly. The new songs lend a bittersweet reflective mood to her past relationships.

In “Forever and Always (Piano Version) (Taylor’s Version),” listeners can feel acceptance where before they felt anger in the lyrics “So here’s to everything coming down to nothing / Here’s to silence, that cuts me to the core.” The piano reflects tender rumination on her past rather than heartbreak.

Additional “From The Vault” songs point to Swift’s growth as an artist and person. Sophie Turner, Joe Jonas‘ wife, reposted Swift’s release of Mr. Perfectly Fine, which is rumored to be about Jonas, bringing the story full circle.

Swift captures a reminiscent frame of mind about a relationship on “We Were Happy” with the lyrics, “We used to watch the sun go down / On the boats in the water / That’s sorta how I feel right now.” Although she wrote it when she was 18, to listeners it feels as though she wrote it recently, as it conveys both maturity and nostalgia.

Another reflective song “Bye Bye Baby” gives Swifties a song to play immediately after a breakup, perhaps relating to the lyrics “I want you back but it’s come down to nothing / And all I have is your sympathy / ‘Cause you took me home but you just couldn’t keep me / Bye bye baby.”

It seems like a personal affront to make listeners wait 13 years for “Don’t You,” another post-breakup ballad that gives a taste of how Swift was feeling when she was younger, but with a deep, resonant sound. The lyrics “But don’t you, don’t you / Smile at me and ask me how I’ve been / Don’t you say you’ve / Missed me if you don’t want me again” makes listeners going through a break-up feel heard.

Taking lyrics from her new song “That’s When,” this album is best played “when it’s sunny or stormin’” and it will make you “laugh when you’re crying.” Swift’s growth as an artist is evident in the tonal richness of the songs.

Swift’s growth as a person is even more apparent, rising above Borchetta’s mismanagement of her work and Braun’s disrespect toward her to create something even better than the original album.