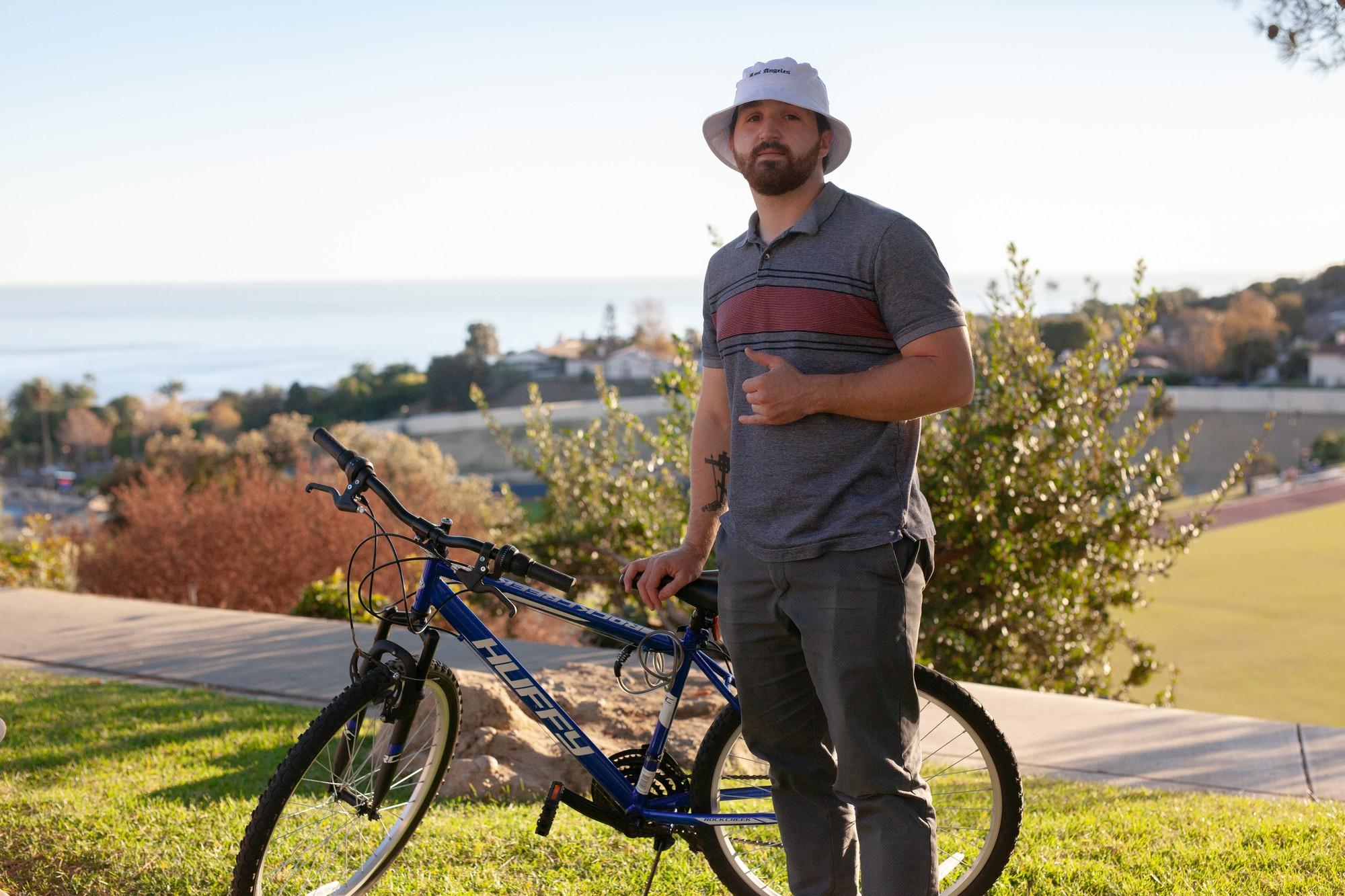 Sophomore Gabriel Claypool stands with his bike on campus. Claypool uses his bike to combat Pepperdine’s hills and make travel easier between his dorm and class. Photo by Ella Coates

If you see a blazing blue bike around campus, it most likely belongs to Gabriel Claypool. The sophomore rides it around campus, zooming from his dorm at Towers to his classes.

“I use it constantly,” Claypool said. “I love it. I literally will go from the library and ride it down to the Caf. I bought it from Walmart for about $100 — best investment I’ve made since moving to Pepperdine.”

Claypool isn’t the only student investing in personal transportation — as the year progresses, students report using bikes and scooters more, like Claypool.

Students with such alternate modes of transportation cited the efficiency and convenience when going to class, work or returning to their dorms. Some students, however, said they still face accessibility issues when getting around campus.

“I had it at home, and I decided just to bring it to campus because why not?” Ferrari said. “I might use it while I’m here — maybe bring it down to Venice Beach or Newport and scoot around there.”

Ferrari also said he enjoys using his scooter as a faster way to move between the dorms and his classes.

“I use it every day, multiple times a day,” Ferrari said. “I got to give it some help up the hills, but it is still better than walking.”

Josh Nash, a sophomore, prefers to ride his Onewheel — a type of electric hoverboard — to travel across campus as opposed to walking, when it’s charged.

Nash said he conveniently stores the Onewheel in his dorm.

For parking and storing his bike, Claypool said he does not have a particular spot.

“For the most part, I just park it on any rail or tree that’s close to where I’m going,” Claypool said. “At night, I park it on a rail that is close to my dorm. I rarely use the bike racks, since they are all so far away.”

With a form of motorized transportation such as a scooter or hoverboard, Pepperdine requests that it be registered, according to the Pepperdine Student Vehicles Policy.

“Any person who has a motor vehicle on campus, including motorcycles and scooters whether licensed for street use or not, must register the vehicle with the Department of Public Safety and properly display the vehicle registration permit on the lower-left corner of the windshield,” according to the Student Code of Conduct.

A Seaside RA confronted Nash once during the first week of school about registering his hoverboard, but after that, no other authority has since warned him, Nash said.

“An RA told me, ‘Hey, this is your warning; we can’t see those on campus; we will take that away,’ and from then on, I have ridden on it every single day,” Nash said. “I’ve driven past DPS, RAs — I’ve ridden it frequently, and no one cares.”

Some students, such as senior Alex Kolm, do not have any extraneous modes of transportation, and Kolm said he has to take the shuttles to commute to and from main campus and his housing at Drescher.

“It’s [the shuttle is] an easy way to get around campus — just don’t leave your dorm with five minutes to class, because the shuttle is not gonna help with that,” Kolm said. “It’s not that efficient.”

The shuttle schedule also hinders Kolm’s mobility on campus, he said, with infrequent shuttles and their often late arrivals.

“On the weekends, the shuttles are nonexistent; it’s either there or it’s not, and I might as well walk then,” Kolm said.

Regarding accessibility, the shuttles are often a valuable mode of transportation; however, main campus as a whole often has poor or hidden accessibility, Claypool said.

Claypool said he became more aware of accessibility challenges at Pepperdine after bringing his bike to campus.

“Riding a bicycle really makes me think about how hard it would be to have a wheelchair here,” Claypool said. “And a lot of the buildings are almost not accessible at all.”

After playing intramural volleyball and breaking her ankle on both sides earlier this year, senior Kayla Nunn said she uses a knee scooter to keep pressure off her ankle. Because of this, she is unable to use stairs and has discovered several accessibility issues on campus.

“I really think they [Pepperdine] need to be more willing to listen to their students about what they need if they have a problem with accessibility,” Nunn said.

Because of her broken ankle, Nunn said she has to rely on friends to drive her from her home off campus to classes but faces problems with parking and shuttle accessibility.

“When I confronted them [DPS], I wanted to park in the main lot or just have parking lots more accessible — and they [DPS] immediately shut down the option without really giving reasons why or really working to get that [accessibility] for me,” Nunn said.

Nunn said she thinks the shuttle system can be improved as well.

“They [Pepperdine] failed to see the little things in between that can make the so-called things they think are accessible, inaccessible, because they don’t have to do it,” Nunn said. “Making the conversation louder around accessibility on campus is important, because it’s been a problem for a while and nothing seems to be done about it.”