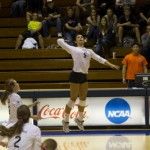 Women’s Volleyball: The No. 18-ranked women’s volleyball team made the deepest post-season run out of all the fall season sports, advancing to the Elite Eight in Hawaii for only the second time in school history. The team fell to No. 1-ranked USC in the NCAA Regional Finals in Hawaii. A major highlight for the Waves was when they beat UCLA in five sets in the second tournament of the season. The Bruins eventually went on to win the championship. Next season, the team loses dominating seniors Lilla Frederick and Kim Hill. However, 29-year Head Coach Nina Matthies still has a solid class returning including freshman standouts Samantha Cash and Katie Messing. 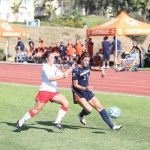 Soccer: An incredible 15-2-4 season run that resulted in a WCC championship, the second for the program in Pepperdine history, marked the high point for the No. 7-ranked women’s soccer team. A goal scored by Long Beach State within the last 13 seconds in overtime in the first round of the NCAA Tournament put an end to the Waves’ season, yet in a way it sums up their year. Hard-fought wins characterized the squad, which endured four double overtime games and two overtime games. They tied all of their double OT games, and split the single overtime wins. Junior Anisa Guajardo led the team on the season with nine goals, and senior Laura Cole finished close behind with seven goals of her own. 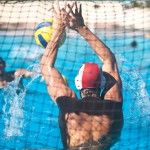 Men’s Water Polo: Under the leadership of only two seniors, Nathan Castillo and Andrew Milcovich, the young men’s water polo team closed out the season, 12-4, and ended Mountain Pacific Sports Federation (MPSF) league play, 2-6. Junior Matthew DeTrane offers hope for next season as he finished with a team-high 43 goals, 20 assists and 17 steals. Milcovich added 40 goals, 30 assists and eight steals. The Waves started off the pre-season with three consecutive wins over Pomona Pitzer, Claremont-Mudd-Scripps and rival LMU, but faltered from there. In October, they developed a three-game win streak in which they earned their two league wins against UC Irvine and Pacific. 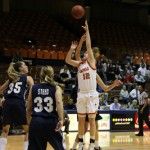 Women’s Basketball: The No. 5-seeded women’s basketball team nearly pulled off an upset of the No. 4-seeded Saint Mary’s Gaels in the quarterfinals of the WCC Championship Tournament. Senior Lauren Bell played her heart out to record a career-high and Pepperdine WCC tournament record 30 points, sinking six of her nine shots from behind the arc. However, it was not enough as the Gaels were able to hold on tight, 67-63. In regards to the season as a whole, the Waves had a strong run that included many come-from-behind wins, the most memorable being the Portland game that was featured on ESPN’s Sports Center. Next season, the team will need the younger players to step up as they lose key players seniors Bell, Skye Barnett, Jazmine Jackson and Katie Menton. 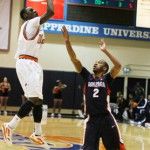 Men’s Basketball: Led by first year head coach Marty Wilson, the injury plagued men’s basketball team (10-19) struggled throughout the season, capping it off with a tough 76-54 loss against San Diego in the second round of the WCC Tournament. The team’s four league wins came over San Francisco, Santa Clara and Portland. Senior center Corbin Moore kept the team level with consistent play averaging 10.4 points and 8.6 rebounds per game. He also hit an impressive 45.8 percent of his three-pointers. Next season, the team will look to freshman Jordan Baker who showed flashes of brilliance. Baker scored 26 points in a 78-63 loss against San Francisco in the sixth WCC game of the season. 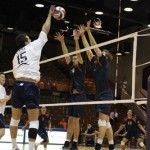 Men’s Volleyball: The No. 7-ranked men’s volleyball team started the season hot, winning five of its first six match-ups. However, 29th-year head coach Marv Dunphy warned the season was still young and nothing could be assumed with the fierce MPSF competition, and he was correct. The Waves fell into a three game slump against top-notch teams UCLA, UC Santa Barbara and USC. However, the team avenged those losses with a later sweep of Santa Barbara to go along with wins over strong programs such as Penn State and Harvard. Junior Maurice Torres has led the team this far with 396 kills and 39 serve aces. Behind him, rookie Josh Taylor has consistently put out solid performances with 317 kills. 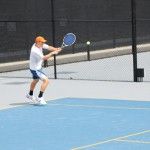 Men’s Tennis : The experienced No. 7-ranked men’s tennis team has gone on a tear this season, ripping a flurry of ranked teams under the guidance of Adam Steinberg, who has now head coached the Waves for a decade. The team, which is currenty on an 11-game winning streak, features four dominant senior players. In March alone, they blanked four teams. Junior Sebastian Fanselow and senior Alex Llompart lead the way as they are on nine and six-game winning streaks, respectively. In addition, the doubles team of senior Hugh Clarke and sophomore David Sofaer has maintained a steady pace with a 17-4 overall record. The team looks to face-off against the remaining WCC teams leading up to the Conference Tournament before attempting a run at the NCAA Championship in May. 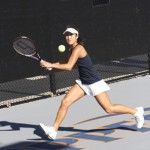 Women’s Tennis: Throughout the season thus far, the women’s tennis team has experienced spurts of winning and losing streaks. Currently, the team is on a four game winning streak, which includes dominant wins over LMU, Santa Clara and San Francisco — giving the Waves a perfect 3-0 WCC conference record. The Waves are 9-6 on the season. Freshman standout Lorraine Guillermo has led the team, winning 18 of her 27 matches thus far. Senior Khunpak Issara also contributes her impressive 18-9 overall season record. The doubles team of the two, Guillermo and Issara, has also proven successful, as they have won eight of their last 10 games.

At the beginning of the soccer season, the future looked bleak for Arsenal F.C. Two of their best players, Samir Nasri and Cesc...
Copyright 2013 Jupiter Premium Magazine Theme
Back to top