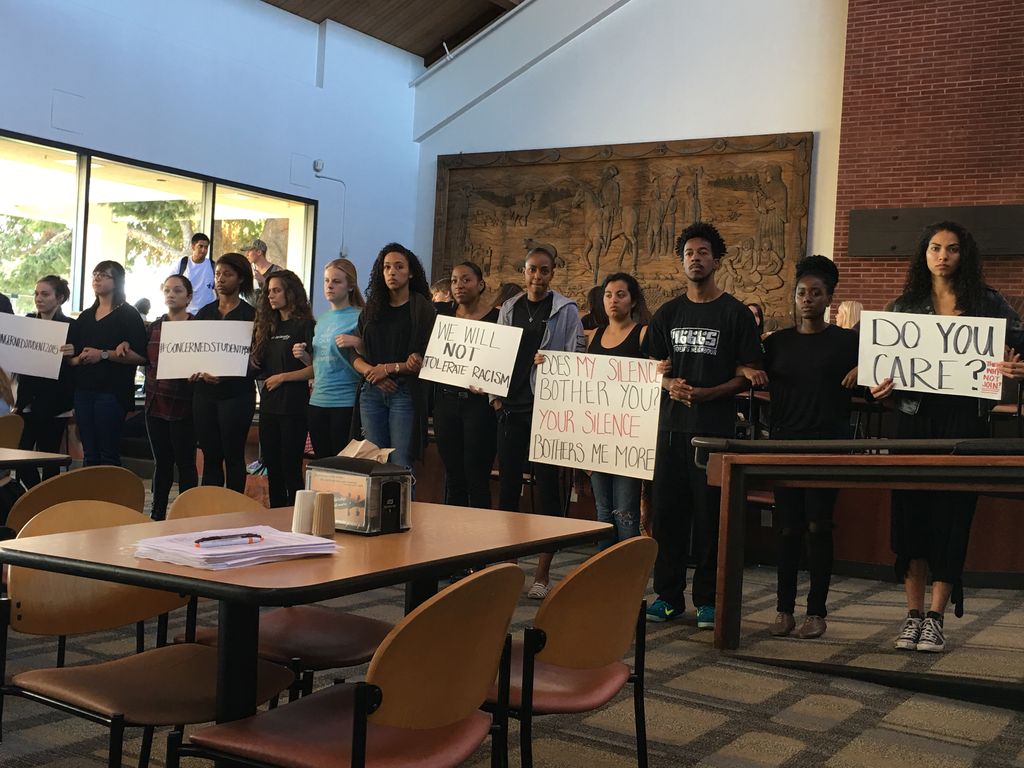 President Benton decided to have the wooden carving mural removed from the Waves Cafe in the beginning of July, according to Phil Phillips, vice president for administration.

The mural illustrated Father Serra next to a mission, wildlife and conquistadors and a Spanish colonel prominent in the center of the piece alongside a group of Native Americans in the lower right corner. The removal of the carving was one of the demands made by students in a peaceful protest last year in the Waves Cafe.

“This move made sense if you had the context,” Phillips wrote in an email to the Graphic. “We had students who were offended by this example of ‘conquest art’ in our cafe; we had students who were concerned by the University’s lack of sensitivity about the art; we had, in Calabasas, a place to store the piece for teaching.”

Students who participated in the protests requested five demands of the administration. In addition to the permanent removal of the mural, they called for the ban of the app, Yik Yak, removal of the Christopher Columbus statue, cultural sensitivity and diversity training for all students, faculty and staff, and a General Education requirement course on diversity and inclusion. Students protestors used the hashtag #wavesagainstignorance on social media.

Phillips wrote that there have been many ideas and proposals for the new empty space and that designs to fill the space will begin soon. Dean of Seaver College Michael Feltner said that Matika Wilbur, a Native American artist and a speaker at this year’s W. David Baird Distinguished Lecture Series, will display her artwork illustrating Native Americans in the Waves Cafe during the time concurrent to her lecture.

Senior Caitlin O’Grady participated in the peaceful protests last fall. As an International Studies and Theater Arts major and Hispanic Studies minor, she said she is tired of seeing minority voices being pushed down.

“I think it’s really great that Pepperdine is taking initiative to finally listen to the voices of its students.” O’Grady said.

O’Grady said she’s glad the administration is listening and taking steps to make Pepperdine diverse and inclusive. During her freshman year, O’Grady said she was told that no one could really protest and that it was all about the donors. But now that she is a senior, students are speaking up, there is an LGBTQ+ club and the mural is gone.

“When we did our protest, people were laughing at us,” O’Grady said. “But now look what we did. There is change, don’t be afraid to speak out.”

Feltner said it was a unique opportunity to remove the mural this summer.

“I fully support the President’s decision. I think that it was the right decision for the community,” Feltner said.

Feltner said a diversity class for the GE curriculum is being considered, and administration is looking at every opportunity they can to make sure that Pepperdine is a community that welcomes everyone. Faculty is also going through cultural training and is examining ways to increase diversity in courses and content.

Approximately 30 faculty and staff attended SEED Diversity Training this past week to learn and observe the systems of diversity and inclusion. Assistant Professor of English and chairman of the Seaver Diversity Council John Peterson said recent events have put a spotlight on diversity and that he finds that the seminar is absolutely necessary. Peterson said he is grateful for the student voices on campus and said that it shows students leading the cause.

Sandra Harrison, director of Disability Services and also chairman of the Seaver Diversity Council, said she has a lot to learn about what’s going on around campus and that she gets to see things through the students’ eyes. Harrison said she hopes that faculty and staff can make steps to make the campus more inclusive in and outside classrooms.

Marcia Chatelain, an associate professor of history in African American studies at Georgetown University, spoke to Pepperdine faculty and staff at one of the SEED seminars. In addition to being a professor, Chatelain talks to peers, other faculty members and students about race in America and what is happening on college campuses.

“[Pepperdine is] a great school and it’s a great community that I think is really committed to thinking about how events, over the past few years and events on campus, can be used to strengthen the university’s mission and its ability to treat students,” Chatelain said.