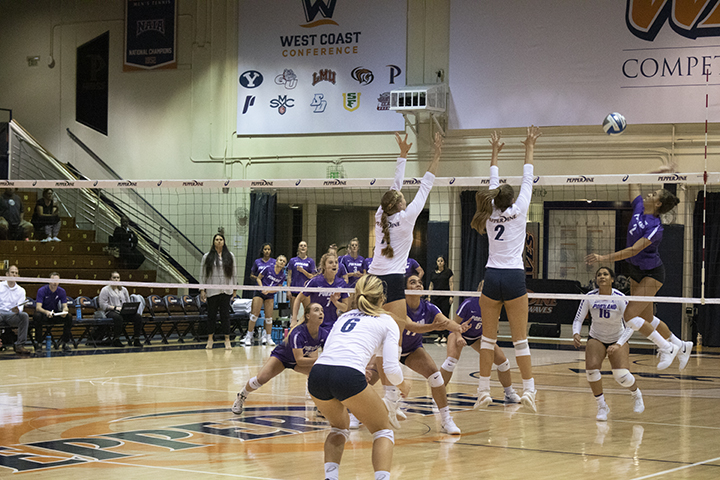 The Waves played their fourth and fifth West Coast Conference games of the season Thursday, Oct. 3 and Saturday, Oct. 5 against the Portland Pilots and Gonzaga Bulldogs, picking up their third and fourth WCC wins.

“Our body of work has been really good,” Head Coach Scott Wong said. “To be in this situation, four and one in conference — it feels good.”

Pepperdine only dropped one set during the homestand as they defeated Portland 3-1 and Gonzaga 3-0. 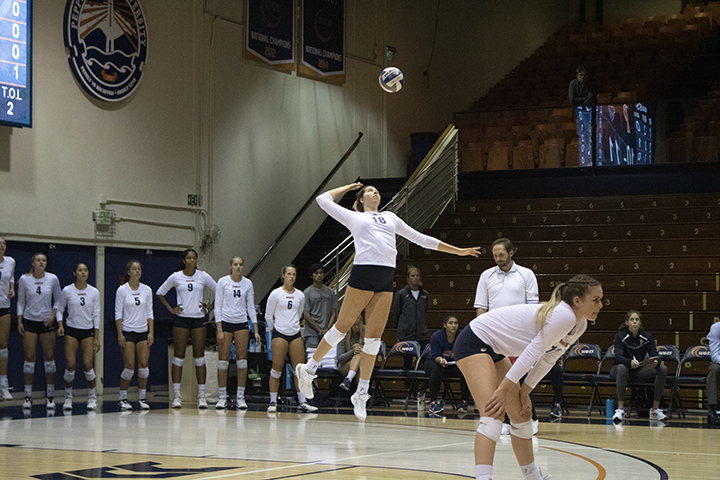 Neither Pepperdine nor Portland could break away from each other in the first three sets. The largest lead for either team was six points when the Pilots led 11-5 in the third.

The first set saw Portland take a slight lead early, but the Waves went on a four point streak midway through to take a 14-12 lead. The Pilots tied the score three times the rest of the match but never took the lead, and Pepperdine won the set 25-23.

In the second set, the Waves took the early lead 6-1. Portland battled back to take the lead at 13-12, and the teams traded scoring streaks back and forth until the score was tied at 19-19. Pepperdine went on a 6-3 run to close the set, winning 25-22.

Junior Shannon Scully scored three of the last four points for the Waves in the set, tallying three of the 20 kills she ended the night with.

“Having the support of my teammates really helped me,” Scully said. “I’ve been talking to the coaches a lot about being a leader on the court, so I think just me having that mental confidence really helped.” 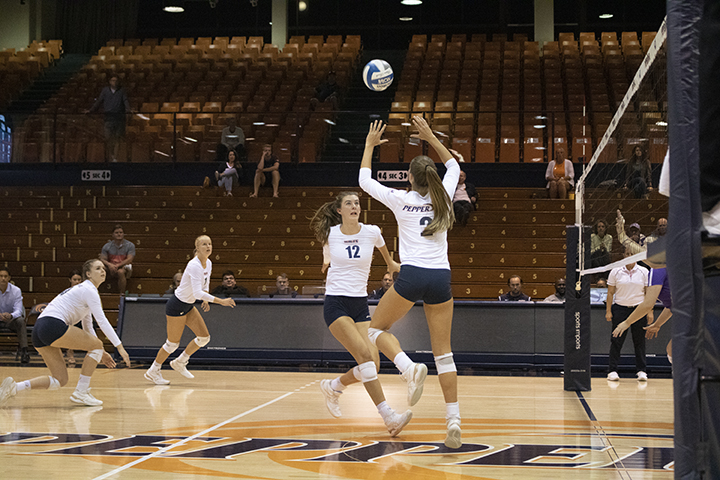 Despite any momentum Pepperdine gained from the first two sets, the third favored Portland. Although the score was close the whole set, the Pilots were in control, scoring the first three points and never allowing the Waves to even tie the score.

“On our side of the net, we weren’t communicating very well,” Scully said. “That plays a huge role with volleyball in general.”

Wong substituted redshirt freshman setter Tayah Mahi in for the starting setter, freshman Isabel Zelaya, when his team was down 11-5 in the third set. Due to injury, it was Mahi’s first appearance since Sept. 20, and she played the rest of the game.

“Tayah [Mahi] does a really nice job putting up a good hittable set,” Wong said. “We took good true swings every time, and the offense got going again. It started like that in game one, but it got going again with Tayah [Mahi] back in there.”

Pepperdine could not salvage the third set, though, and lost it 25-20.

Mahi and the Waves turned things around in the fourth set, cruising to a 25-14 victory. Just like the Pilots did in the second set, Pepperdine scored the first three points and never looked back.

“In that third set, we kind of fell apart a little bit,” Mahi said. “But we picked things back up and started playing together again. We were for sure able to finish in that fourth set.”

Finishing games has proved to be difficult for the Waves this season. In five-set matches, they are 0-6, including their only WCC loss to San Diego on Oct. 1.

“We feel like we’re right there — and really, just a couple of points away,” Wong said. “The standard that we’re setting for the whole team is, ‘We gotta be as good as we can for as long as we can.’”

Gonzaga entered the early Saturday afternoon match having lost all nine sets it had played thus far in conference. The Bulldogs were on an eight-match losing streak, but the Waves showed no mercy from the first serve at Firestone Fieldhouse.

Senior libero Hana Lishman served three aces in the first set and added several spectacular digs as Pepperdine went on an 8-1 run to pull away.

“Hana [Lishman] set a tone early with her serving,” Wong said. “I thought she served really well and knocked [Gonzaga] off the net.”

Pepperdine hit .367 in a 25-13 first set victory, with Hannah Frohling leading the charge with seven kills on only eight swings and Scully adding five kills. Wong said Mahi did a “nice job” running the offense.

The Bulldogs would not go as quietly in the second set, erasing an early 6-2 deficit with help from two blocks by junior outside hitter Chapin Gray.

The set featured 15 ties and seven lead changes, but the Waves pulled it out, with redshirt senior middle blocker Tarah Wylie delivering two of her six kills on the final two points of a 25-23 set victory.

“Normally we win the first set and then we relax a little bit, but with the teams in our conference, you really can’t do that,” Wylie said.

Pepperdine entered the match with only two three-set wins in 2019, but they clearly weren’t interested in allowing this one to go to four sets.

The third set was close early, but the Waves closed the match with an 11-1 run, sparked by four blocks by Wylie.

“We only had one block after two sets,” Wong said. “And then, all of a sudden, we ended with about six. That was pretty neat to see with Tarah [Wylie]; she made some good changes.”

Offensively, Frohling finished with 16 kills on a .438 hitting percentage to lead all hitters in the match.

“Hannah [Frohling] lit it up,” Wong said. “She probably had her best offensive match of the year so far.”

Wylie said she loved having her friend and fellow senior, Frohling, firing on all cylinders after missing the first six games of the season with an injury.

“Once she got a little practice under her belt and got back into it, she was amazing,” Wylie said. “It’s great to have another form of leadership on our team and out on the court.”

The sweep of the Bulldogs gave Pepperdine its fifth consecutive victory at home, including four in WCC play.

Though the long week began with the tough loss at San Diego, the Waves are on a roll as they prepare for three conference road games.

“We were really excited and worked really hard in preseason, working up to conference,” Lishman said. “[San Diego] was a tough loss, but it helped us learn a lot about ourselves and bounce back and prepare for the upcoming [remainder of the] season.”

The Waves also defeated Loyola Marymount on the road to score another point in the PCH Cup Oct. 11. The Waves improved their conference record 5-1 while the Lions dropped to 4-2. 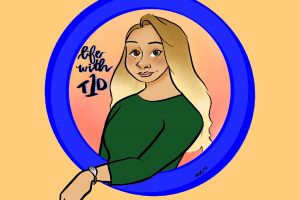 Photos courtesy of Destin KvideraFirst-year Destin Kvidera said she was diagnosed with Type 1 diabetes when she was just...
Copyright 2013 Jupiter Premium Magazine Theme
Back to top