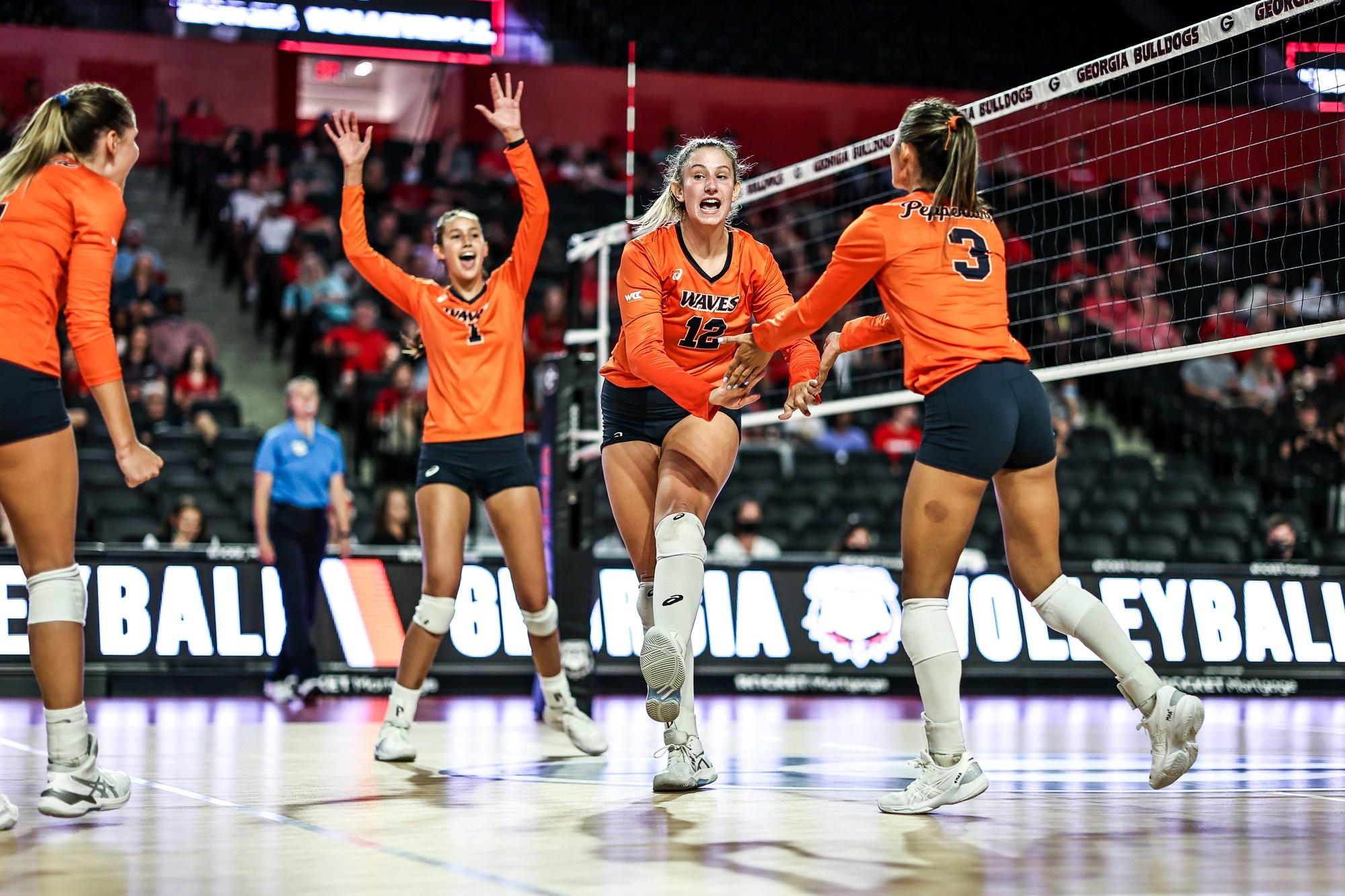 Junior defensive specialist Aubrey Roberts (No. 3) celebrates earning a point with teammates sophomore middle blocker Meg Brown (No. 12) and freshman outside hitter Grace Chillingworth (No. 1). After losing the first two sets, the Waves outscored the Bulldogs 65 to 49 over the final three to secure the win. Photos courtesy of Tony Walsh

“It’s so good to be back out on the court,” senior outside hitter Rachel Ahrens said. “It was a little rough to start, but we fought back and it shows how strong and resilient this team is. I’m super proud.”

The Waves had a slow start to their last match of the weekend, hitting only .095 as a team in the first set, while Georgia came out hot, hitting .375. One of the Bulldogs top performers was junior outside hitter Amber Stivrins, who had 9 of her total 14 kills in the first two sets.

Pepperdine hurt themselves with 14 attacking errors in the first two sets, and the Bulldogs also tallied five aces in that span compared to Pepperdine’s two.

“They have great hitters on the other side and their serving is awesome,” Ahrens said. “Getting across the net quickly against those hitters was our main focus and I think it came a little bit faster than we were expecting in the beginning, but we turned it around the last three sets.”

Even with some mistakes, the Waves held a small lead through most of the second set. Nonetheless, they were unable to finish, as the Bulldogs took back the momentum at the very end, winning the set 24-26 after Pepperdine led 24-22.

Despite the tough loss in the previous set, the Waves came out in the third set and immediately built a lead, which they maintained throughout, thanks to six kills from Ahrens and four from freshman outside hitter Grace Chillingworth.

Coming off a season where she was named an AVCA All-American honorable mention, Ahrens started this year strong for the Waves. She led the attack, particularly against Georgia, where she tallied 23 kills on a scorching .462 hitting percentage. Due to her efforts, she was named the tournament’s MVP and co-player of the week in the WCC.

“Rachel is an All-American,” Head Coach Scott Wong said. “She attacked unbelievably well, passed, served and played defense really well all weekend. She’s carrying a big load for us, but she’s getting it done and doing it with her team in mind.”

Chillingworth also had a big opening weekend, tallying 10 kills in the match against Morehead State. She also had her highest kill total in her brief collegiate career against Georgia, collecting 16 on a .294 hitting percentage to help the Waves make the comeback.

“Grace started all weekend for us and did a nice job carrying a big load,” Wong said. “She’s been a steady, consistent player for us and she’s proven in our gym.”

Some other key contributors for the Waves were junior setter Isabel Zelaya who had 50 assists and 8 blocks, and sophomore middle blocker Meg Brown, who had seven kills and eight blocks. Brown earned WCC defensive player of the week honors and both Zelaya and Brown were named to the All-Tournament team alongside Ahrens. Senior libero Madison Shields led the team with 13 digs and sophomore outside hitter Emma Ammerman added 10 kills on a .278 hitting percentage along with three blocks.

After winning the third set, the Waves rode the momentum into the fourth, building an 11-5 lead behind 8 kills from multiple players, hitting a .500 clip. They wouldn’t look back, as a 6-2 scoring run gave them a commanding 17-7 lead, and they eventually forced a final set, winning the fourth 25-16.

“Confidence in ourselves and confidence in knowing that we can play against these tougher teams helped swing the momentum,” Ahrens said. “We know how good our game is and when you focus on playing your game and playing together it can lead you a long way.”

Similarly to set four, the Waves built a lead early on in the final set.

Kills from Ahrens and freshman middle blocker Reagan Goeke helped them jump to a 6-3 lead. three kills from Chillingworth would help put them up 11-8 before Georgia fought back making the score 11-10.

In a critical moment, Wong challenged a referee’s call that a Pepperdine attack had gone out of bounds without a Georgia touch. The replay revealed Georgia had touched the attack before it went out, reversing the initial call.

The successful challenge put the Waves up 12-10 and after forcing some attacking errors from Georgia, the Waves were victorious by a tally of 15-11.

“I’m just really proud of our team,” Wong said. “We’re not a perfect volleyball team right now, but our heart, resilience and toughness is off the charts.”

The Waves will be back in action at the Santa Barbara Classic on Sep. 3 and 4, where they will play Kansas State, San Diego State, and the hosts, UC Santa Barbara.

“Passing, serving and overall efficiency are things we’re still working on,” Wong said. “I think we’re a tough team and we’re playing pretty good volleyball, but there’s so much room for growth for this team and it’s exciting.”