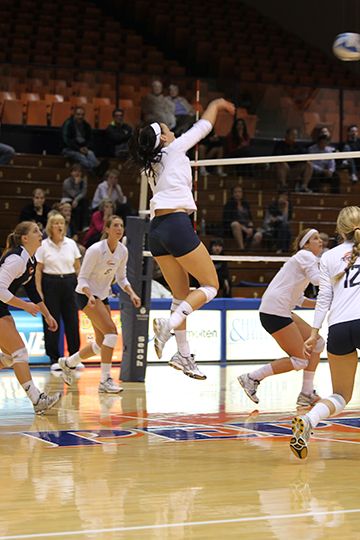 An unexpected 3-2 loss to No. 18 San Diego Nov. 3 that came after seven consecutive match victories didn’t put too much of a damper on the women’s volleyball team’s extraordinarily successful 2012 season.

The Waves, who have five games left to play this season, have so far recorded an 18-8 record, going 7-5 in conference play.

This season for the Waves has been marked by dominant victories over worthy opponents such as Gonzaga, Portland and San Francisco, as well as consistent player recognition.

Orozco has led the team with 357 kills this season, notching a career-high 27 kill performance against PCH rival Loyola Marymount Oct. 25. The highest number of kills in one match by any player is 27 in the WCC this season.

Orozco also received NCAA Player of the Week honors Sept. 19 for her exceptional play at the start of the season, becoming the first Pepperdine women’s volleyball player to receive that award.

Woolever wasn’t the only one to see recognition in the Waves home match against Saint Mary’s on Nov. 1.

Head Coach Nina Matthies also notched her 900th career match with the Waves. The win over the Gaels was Matthies’ 573rd, giving her an overall Pepperdine career record of 573-327 in her 30 seasons as head coach and making her one of the most successful coaches in the league.

The Waves have consistently held a spot among the top 25 teams in the NCAA, currently sitting at No. 24.

Multiple other WCC teams are also ranked in the top 20, including No. 19 San Diego and No. 14 BYU, indicating the strength of the WCC this season.

The Waves’ next game is at Loyola Marymount Nov. 8 at 7 p.m.

The Waves then head to San Francisco Nov. 10 before returning home for three consecutives games starting on Nov. 15.

The Waves boast at almost perfect (8-1) home record, giving them momentum as they enter the postseason at the end of November.

Anyone who has lived in Drescher, or looked upon it from a lower point on campus, is aware of the daunting road that connects...
Copyright 2013 Jupiter Premium Magazine Theme
Back to top