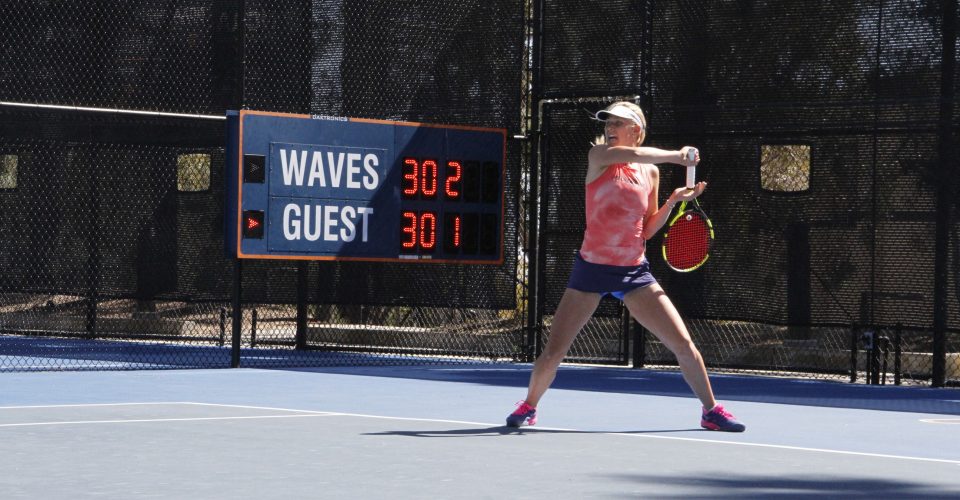 The Waves clinched the victory on court two with junior Adrijana Lekaj’s 6-4,7-5 win over UCLA’s Elysia Bolton, who is ranked No. 10 in the nation.

“We have a lot of respect for their player at No. 2,” Head Coach Per Nilsson said. “We thought that was going to be one of the toughest matchups for us today, but [Lekaj]’s been playing probably the best of anyone on the team, and she really deserves to win that match. I’m really happy for her; it’s been coming.”

Lahey said she knew she and Kuczer would be the deciding game for the doubles point, but did not feel any added pressure.

“Today I was really well prepared for this match,” Lahey said. “It was actually more exciting to know that it was up to me and I kind of used that as energy and confidence rather than to make me nervous.”

No. 56 Lahey said she took the momentum from her doubles match into her singles match against No. 64 Jada Hart.

Lahey won the first set 6-3 and built a 5-1 lead in the second set before Hart started to mount a comeback, winning three games in a row. In the 10th set, Lahey clinched the match to win 6-4.

“I think I had a couple points where I had a small mental lapse, but [Hart] also really stepped up and improved her level,” Lahey said. “She didn’t play as well as I’ve seen her play today. She’s a really high quality player and she can play like that, so I tried to not let that rattle me.”

With courts four and five going into third sets, Lekaj became the Waves’ best chance for a sweep.

“Of course I felt a little bit of pressure, but I just tried to stay focused on the game,” Lekaj said. “I kept thinking about the things that we worked in practice and just tried to put in hard work and stick with my plan.”

Lekaj won a back and forth first set over Bolton 6-4. The second set was especially close, with Bolton breaking Lekaj’s serve in the 10th set to tie the game 5-5. Lekaj won the next two sets, though, and ended the dual with a 7-5 win.

Her match against Bolton was only Lekaj’s fourth match and second win on court two.

The Waves lost three straight duals to No. 3 Duke, No. 14 California and No. 23 Michigan before Wednesday.

“I think we needed to win this match,” Lekaj said. “From the beginning, we came really strong in doubles, which [is] what we struggled [with] a little bit in the last couple of weeks against good teams. I think this win is going to give us more confidence, especially in doubles.”

Nilsson said the team went through some adversity in February that may have affected them against California and Michigan.

“I think we’re kind of getting back on track and feeling good about ourselves again,” Nilsson said. “We just got to get healthy and get everybody ready to rock and we’ll be good to go.”

Lahey said the string of losses had taken away her momentum.

“I feel like I’ve been really nervous and not on top of my game,” Lahey said. “Then recently we’ve gotten two weeks of good training in and I think we’re now all playing a lot better and ready to take on some tougher teams.”

Nilsson also said that momentum is important for the team, especially the momentum gained from defeating a team ranked No. 6 in the nation.

“It feels good to win those matches obviously,” Nilsson said. “We know we can play with the best. We only have two players in the lineup from last year, so we have four new players. It’s great—it’s good experience for them, and it’s good to see that new people can come in and beat good teams.”

With those two wins, the Waves now sit at 8-3 on the season. Pepperdine starts conference play in their next dual match, Mar. 23 at Loyola Marymount University. 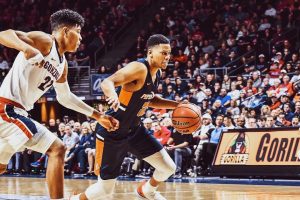 Photos Courtesy of Morgan Davenport Only a few people learn the lesson of never giving up. Eric Cooper has learned...
Copyright 2013 Jupiter Premium Magazine Theme
Back to top