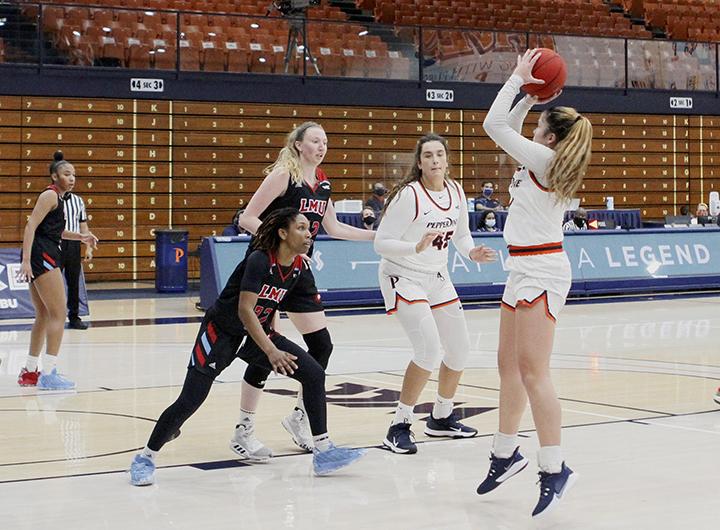 Junior guard Malia Bambrick shoots a jumper during the Feb. 13 game against LMU in Firestone Fieldhouse. Bambrick led the Waves with 17 points, and was the only Pepperdine player on the court for over 30 minutes.

At long last, Pepperdine Women’s Basketball has a conference win.

Desperate to end a 13-game losing streak that included the first 12 games of WCC competition, the Waves used a career night from Tara Dusharm and a perfectly run inbounds play to Jayla Ruffus-Milner for the game-winning basket to edge Loyola Marymount 51-49.

“I feel like this is everything we’ve been working toward,” junior guard Malia Bambrick said. “To be able to get that first one, it’s definitely a good momentum shift for us.”

It had been over two months since the Waves last won, a 54-46 home victory over on Dec. 12 that brought Pepperdine’s record to 3-0. With the first meeting decided New Mexico State by three points and the Lions on a five-game losing streak of their own, both teams saw Saturday’s game as an opportunity to get once-promising seasons back on track.

However, neither team got off to a clean start, Pepperdine jumped out to a 9-0 lead over the first 4:30 of game time, but that lead evaporated over the next four minutes.

The Waves couldn’t take care of the ball, at one point turning it over on four consecutive possessions, and LMU gradually came back. A Chelsey Gipson 3-pointer and a Meghan Mandel layup capped an 11-0 LMU run to give the Lions a two-point advantage after a quarter.

The two teams combined for 16 turnovers in the first quarter alone, just shy of the 20 combined points scored in the opening period.

“We have been working very hard to improve the little minor things that have been messing us up in the other games,” Jayla Ruffus-Milner said. “Even though we won, there’s learning lessons we can take from this.” 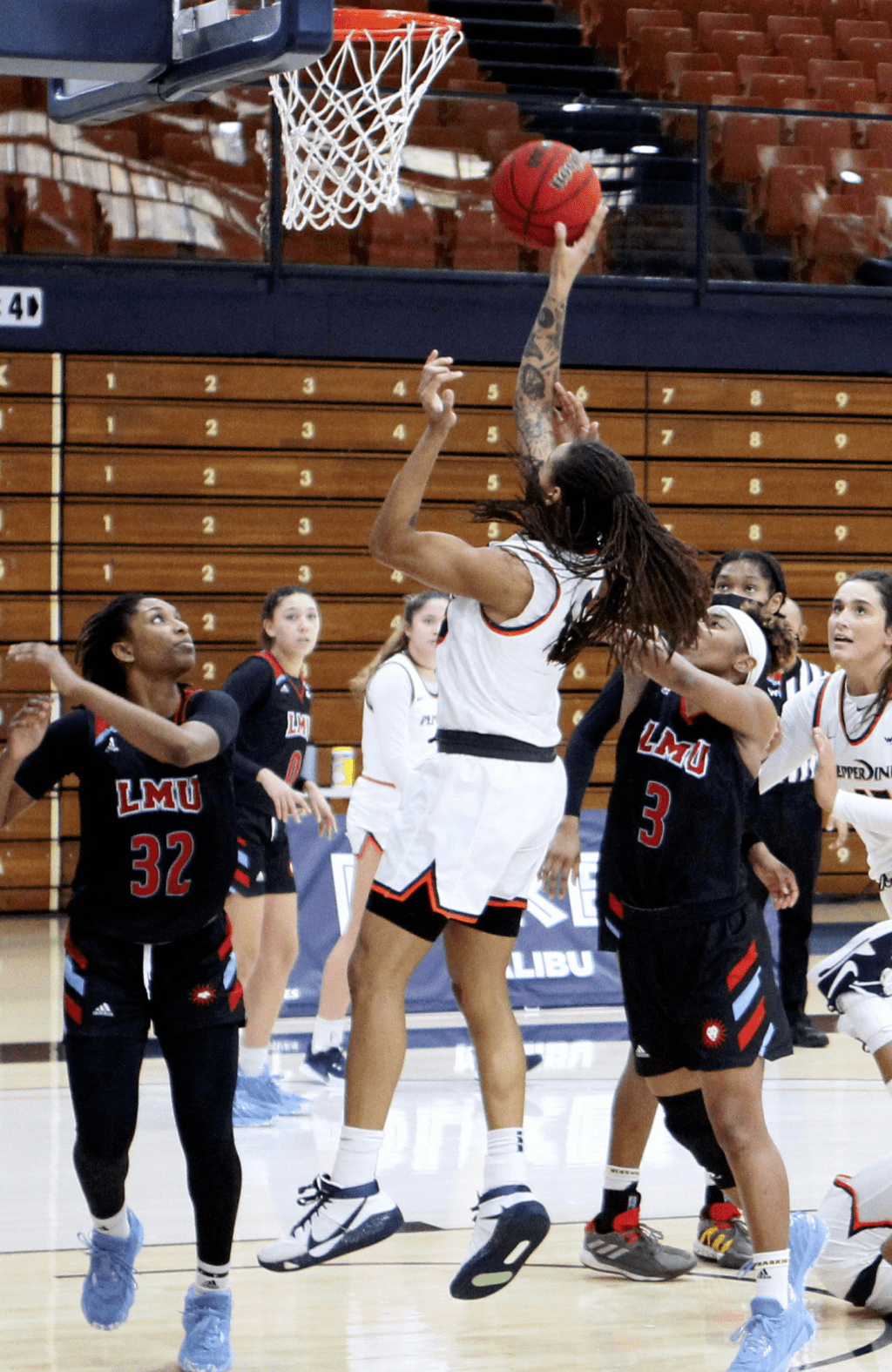 The Lions were feeding redshirt junior guard and leading scorer Ariel Johnson, who had nine points in the first half. Pepperdine got a somewhat unexpected spark from Dusharm, a graduate transfer from Saint Louis.

The sixth-year center, who appeared in one game last year for Pepperdine before going down with a season-ending injury, got only her second start of the season but saw a lot of the ball inside the paint. Dusharm led the Waves with nine points at the break, including converting a 3-point play to tie the game at 24 as the teams went to the locker room.

Pepperdine came out much improved in the second half, only turning the ball over twice and outscoring the Lions 17-9 in the third quarter.

“We took better care of the ball in the second half,” head coach Kristen Dowling said. “They had 12 points at halftime from turnovers, they only had 16 for the game. So, four more in the second half. I think that was the key.”

Dusharm, an 88% free throw shooter this season, went 4-for-4 from the line in the third period. She finished with 13 points in 25 minutes, both highs in her Pepperdine career.

“We’ve been in a lot of close games,” Dusharm said. “So, I just make sure my teammates and myself keep our composure through it all. When it comes down to it, everyone knows their role and we did it.”

From Pepperdine’s side, the fourth quarter belonged to Bambrick, who scored 7 of her 17 points in the final period. She was the only Wave to break through a stout LMU defense in the closing minutes, as Pepperdine only managed three non-Bambrick points in the fourth.

LMU went on an offensive run, getting key 3-point buckets by Johnson and Ciara Ellington and trimming the lead to 49-45 with 3:30 to go. Then, the Lions squandered a golden opportunity when, over the next two minutes, Ellington and Khari Clark both went 0-for-2 from the free-throw line, keeping the Waves lead at four.

Still, Pepperdine was unable to convert on the offensive end. After a Mandel layup cut it to two, Johnson scored the last of her 15 points on a driving layup off a turnover to tie the game with seven seconds left.

Out of their final timeout, Pepperdine ran a designed inbounds play for Jayla Ruffus-Milner, who completely lost her defender by going around a screen from Cheyenne Givens. Freshman guard Kendyl Carson, making her first career start, lofted the pass which found Jayla all alone under the hoop.

“I was just set up for a wide open basket,” Jayla Ruffus-Milner said. “If I missed it, that just really would’ve been on me.”

Jayla was fouled by a trailing Ellington as she laid it in from point-blank range, sending the Waves bench into pandemonium.

“It was execution on everybody’s part,” Dowling said. “There were five people that were on the court, and all five people did their job really well.”

Jayla was unable to convert the free-throw, but Ellington’s last-ditch three didn’t threaten the basket, cementing the win.

“We knew they were going to be playing hard defense and denying,” Bambrick said. “Moving the ball and playing off each other was our best option today.”

Pepperdine now sits at 4-13 overall, with a 1-12 conference mark. The Waves will hope to build momentum with three home games in the next seven days, taking on San Diego on Monday, Pacific on Thursday, and Saint Mary’s on Saturday.