Wisdom comes from a galaxy far, far away 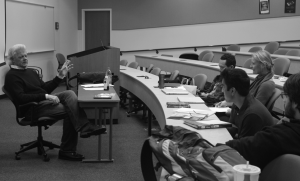 On a cold, gray afternoon in Malibu, Duwayne Dunham exudes nothing but warmth and happiness as he recounts his humble beginnings as an editor in the Bay area. But Dunham’s experience is far from ordinary, as you might expect when your career in media begins with “One Flew Over The Cuckoo’s Nest” and quickly jumps to the critically acclaimed film franchises of “Star Wars” and “Indiana Jones.”

Since those early days, Dunham has had the opportunity to work with some of the most influential filmmakers of the last few decades, and he hopes to bring with him the knowledge and experience gained over the course of his career to the Pepperdine community as a newly appointed adjunct professor in media production.

After graduating from San Francisco State University’s film program, Dunham was given his first opportunity in the film industry — to work as an apprentice editor on Fantasy Studios’ “One Flew Over The Cuckoo’s Nest.”

“San Francisco at that time was a very small film community,” Dunham said, who attributes his early career connections to working within a closely knit group of professionals. “I was just very lucky…. I was a film student … and it honestly seemed like another world. I wasn’t a part of it — I wanted to be a part of it, but how do you get there?”

Dunham advised students that there are no second chances in the film business: Filmmakers only get one shot, and they have to make the most of it. Dunham seized his opportunity with Fantasy Studios, and after working on a few projects, he eventually received a phone call that led to his work with George Lucas as an assistant editor. He was only the fourth person hired in Lucas’ new company.

After working on a number of pictures, including “The Empire Strikes Back,” “Raiders of the Lost Ark” and “The Black Stallion,” Dunham was eventually given his first editorial position on “Return of the Jedi.”

“Working day in and day out with George was extraordinary,” Dunham said. “That was my real education. I learned a great deal from George.”

Taking what he learned from his time with Lucas, Dunham moved on to work with another well-known and much respected (though often criticized) director by the name of David Lynch, doing editing for the films “Blue Velvet” and “Wild at Heart.” Dunham said that the decision to work with Lynch was based on choosing whom he felt he could learn the most from out of his available opportunities.

Continuing his relationship with Lynch, Dunham began working on a feature by Lynch for ABC that eventually became the critically acclaimed and much-talked-about series “Twin Peaks.” Dunham said that his time on “Twin Peaks” was the most fun he has had working in the industry, and he attributes it to the great relationship between the cast and crew, which, according to him, had a strong influence on the success of “Twin Peaks.” Dunham received an Emmy Award for “Twin Peaks” for outstanding editing and got his first opportunity as a director on three episodes of the series.

USC’s School of Cinematic Arts is currently running a “Twin Peaks” series retrospective most Sundays from now until April 14, including screenings of every episode and Q&A sessions with the cast and crew. Dunham headlined the first such session Sunday. The events are free and open to the public and are sure to delight fans and newcomers to the series alike.

The success of “Twin Peaks” led to further directing opportunities, particularly on the Disney projects “Homeward Bound: The Incredible Journey” and “Little Giants.” At the time, Dunham was raising his two young children and decided to make the move to family entertainment in order to share his work with his kids and continue to grow as a filmmaker. Over the next few years, he continued to work in family entertainment while also pursuing his own passion projects, which currently include inspirational and faith-based films.

Dunham first found his passion for teaching after being given an opportunity to do so at USC.

“I knew that I knew my craft, but I didn’t quite know how much I knew until I started talking about it, and then I realized … after seeing all these people looking attentive out there, that maybe I do know something about it,” Dunham said. “I remember the best teachers that I ever had were those who inspired me. And that’s what I try to do. I just try to inspire students to aim high and dream big and pursue their passion, pursue their bliss.”

Dunham was drawn to the chance to teach at Pepperdine because he believes in the university’s mission statement and the active nature of the Pepperdine community’s striving to meet the goals that it entails. He hopes to use his opportunity to teach, to share and to give back to students looking to follow in his steps and make a name for themselves in the industry.

It is his penchant for learning and the constant drive to perfect his craft that makes Dunham such an engrossing study of what it is to be a great filmmaker.

Should Pepperdine change its mascot from a wave to a deer? Alonso Guerrero-Lopez Freshman Yes: There are definitely...
Copyright 2013 Jupiter Premium Magazine Theme
Back to top