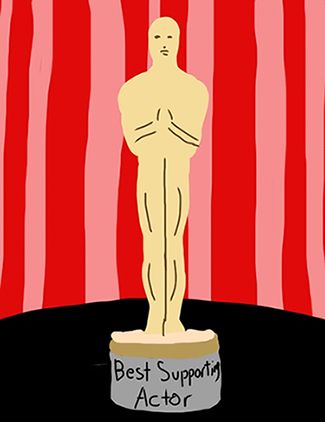 This year’s Oscars was a mix of good and bad. From Lupita Nyong’o’s win and lovely acceptance speech to Ellen Degeneres’ subpar hosting, there was a lot to talk about. One of the biggest travesties of the night was Jared Leto’s win as Best Supporting Actor for his role as Rayon, a transgender woman, in “Dallas Buyers Club.”

“Dallas Buyers Club” is based on real events, but many changes were made in the film. One of them being the portrayal of Ron Woodruff, and the other being — the biggest artistic liberty taken in the film — the creation of Rayon, an HIV-positive trans woman played by Jared Leto.

Leto has received many accolades for this role. Along with an Oscar, he can now boast a SAG award and a Critic’s Choice award, along with many others. What can possibly be the issue since it isn’t likely that all these institutions would give their awards to an undeserving actor?

The problem is not Leto’s capability as an actor, but rather, as Time.com put it on Feb. 28, the fact that he played what is being considered the “Mammy” of our time.

The “Mammy” stereotype is that of a middle-aged, large, black woman happy and ready to serve her white family — an out-and-out lie and caricature perpetuated by Hattie McDaniel’s character in the film “Gone With The Wind,” which, incidentally, won her an Oscar.

As mentioned before, the character Rayon is a trans woman, meaning she was male at birth, but identifies as female. Trans women are women and must not be confused for cis men, men who were both born and identify as male. In other words, if an individual is cis, then their gender identity correlates to their anatomical sex, if they are transgender, there is a disconnect on some level. To truly understand this, it’s best to see gender not in terms of black and white, but rather as nuanced, with every individual person experiencing their gender differently.

For many it can seem confusing since we live in a society where cisgender is considered such the norm that many have never even heard the term cis before. When a cis man plays a trans woman, it just exacerbates this confusion and makes the concept more difficult to grasp. The public will continually associate trans women and simply cis men wearing women’s clothing. This particular misunderstanding is known as the ‘man-in-a-dress’ trope, and it implies that trans women are playing pretend or are performing in one way or another, rather than trans women having an innate sense that they are women. Trans women are not pretending or performing, but Leto is, and his character’s exaggerated vain nature is not helping to usher a change in how we view trans women. In today’s world, trans women make up 45 percent of all hate murders, according to GLAAD, and it is irresponsible to create media that sustains the ignorant ideas that cause murders to begin with.

However, not much more could have been expected for the director, Jean-Marc Vallee, who replies to the question of casting an actual trans woman as Rayon by stating: “Never. Is there any transgender actor? To my knowledge I don’t know one. I didn’t even think about it … I’m not aiming for the real thing. I’m aiming for an experienced actor who wants to portray the thing.”

To say Vallee lacks any sort of tact is an understatement, but he makes it abundantly clear that this film does not actually care about an accurate representation of transgender individuals and their struggles, insofar as the director referring to these issues flippantly as “the thing.” A simple Google search will prove fruitful in gaining the name of trans actresses. The blog indiewire.com was so kind as to put together a list of 10 trans actresses who could have been considered for the role of Rayon.

The most recognizable, and for the most part, only, trans actress in the public’s eye is “Orange is the New Blacks’ Laverne Cox. In the show she plays a trans woman arrested for credit card fraud. A fully fleshed out character, Cox is capable of adding her own experience to this character to make her true to the audience without resorting to harmful tropes. And this is what needs to happen, transgender actors having an opportunity to play a true representation of themselves in media, not cis actors pretending to know what this struggle is like.

As Hollywood pats itself on the back for being so progressive in who they give awards to, just as they were patting themselves 70 years ago when Hattie McDaniel won her Oscar for the now universally known racist caricature of Mammy, actual trans women are being ignored. Give it a few decades, and we will be cringing at Rayon as much as we cringe at Mammy today.