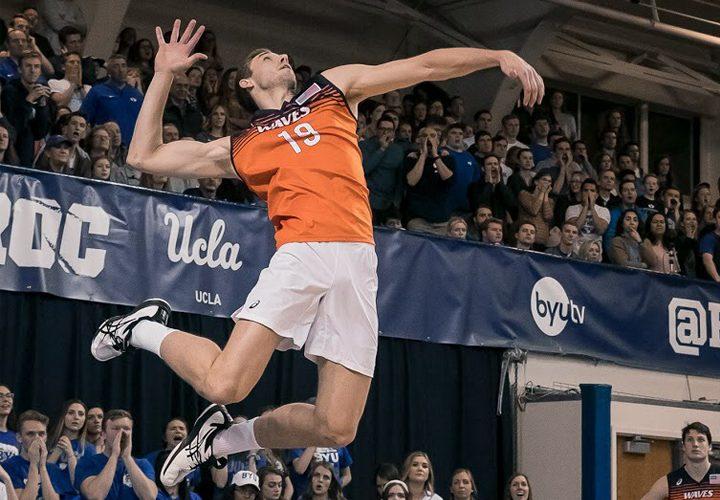 Outside hitter Dave Wieczorek bows his arm back to slam down a jump serve during a 2019 volleyball match. After graduating from Pepperdine, Wieczorek signed to play professionally in Germany. Photo courtesy of Pepperdine Athletics

Among the storied ranks of the five-time title-winning Pepperdine Men’s Volleyball program, Dave Wieczorek‘s accomplishments more than hold their own.

Wieczorek was a three-time All-American and two-time Mountain Pacific Sports Federation (MSPF) Conference Player of the Year during his time as a Wave. His 1,300 career kills rank 12th all-time at Pepperdine, and his 133 career service aces are sixth-best in program history.

Since graduating from Pepperdine in 2019, Wieczorek has gone on to establish a professional career playing in Germany, working his way up to earn a roster spot on one of the country’s most popular teams and an extended look with the United States National Team.

In the fourth installment of the “Where Are They Now?” series featuring former Pepperdine student-athletes, the Graphic caught up with Wieczorek in Munich, where he is enjoying life in Europe and adjusting to becoming a minor celebrity. Previous installments covered Men’s Basketball all-time leading scorer Stacy Davis, beach volleyball pro Kelley Larsen and Reds minor leaguer Quincy McAfee. 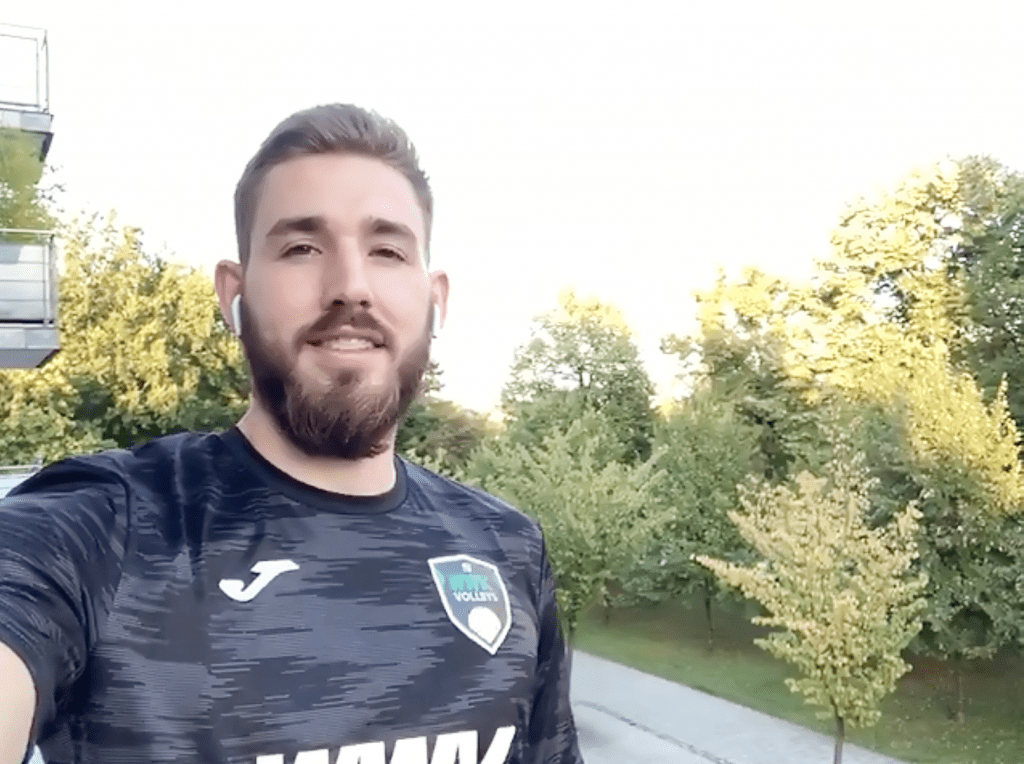 Wieczorek smiles from the balcony of his apartment in Munich, Germany. Wieczorek signed with a new team, the WWK Herrsching Volleys, for the 2020–2021 season. Photo by Ali Levens

Despite being born in Chicago, Ill., Wieczorek said Pepperdine was his dream school from a young age, in large part due to legendary Waves Head Coach Emeritus Marv Dunphy.

“If Marv was coaching in Alaska, I would’ve went,” Wieczorek said.

Wieczorek was in the program for three years, including a redshirt year, before Dunphy retired in 2017. Wieczorek played his final two seasons under Coach David Hunt. He said his time at Pepperdine seems like yesterday.

“It’s hard to say, ‘I’m not a Wave anymore,'” Wieczorek said. “I for sure miss that. I owe a lot to Marv, I owe a lot to my parents and just my hard work. It all started at Pepperdine with the dream of playing here, and I was lucky to have a really great career.”

Wieczorek said European agents started reaching out to him after the 2019 Final Four, in which Pepperdine lost in the national semifinals. He soon discovered that the process of finding a pro team was messier than it seemed.

“To be honest, it’s kind of a nightmare,” Wieczorek said. “There are a lot of — for lack of a better term — snakes in the grass, people who will try to take advantage of you.”

Wieczorek said agents often make promises of offers that don’t come to fruition. Once a player signs with an agent, the agent sometimes signs the player to a lower-level team to make a quick commission. During the pandemic, there can be even greater consequences.

“There are worse scenarios,” Wieczorek said. “A lot of guys I know this year are still at home, looking for a team. Their agents said, ‘I have this, this and this,’ and then all of a sudden, they don’t talk to you or respond to you. The professional aspect of the agent world in volleyball is lacking.”

After one year of what he called a “bad experience” with the Helios Giesen Grizzlies, Wieczorek fired his agent, began to represent himself and agreed to a deal with the WWK Herrsching Volleys.

While they have never finished higher than fifth in their top-flight history, Herrsching is still one of the more popular franchises in Germany and the biggest club in the surrounding areas of Munich. They are known to many more volleyball fans, however, for their unique uniforms.

“We are notorious for the lederhosen jerseys in Europe,” Wieczorek said. “Our coach made it up one day, and I guess it’s a huge hit across Germany.” 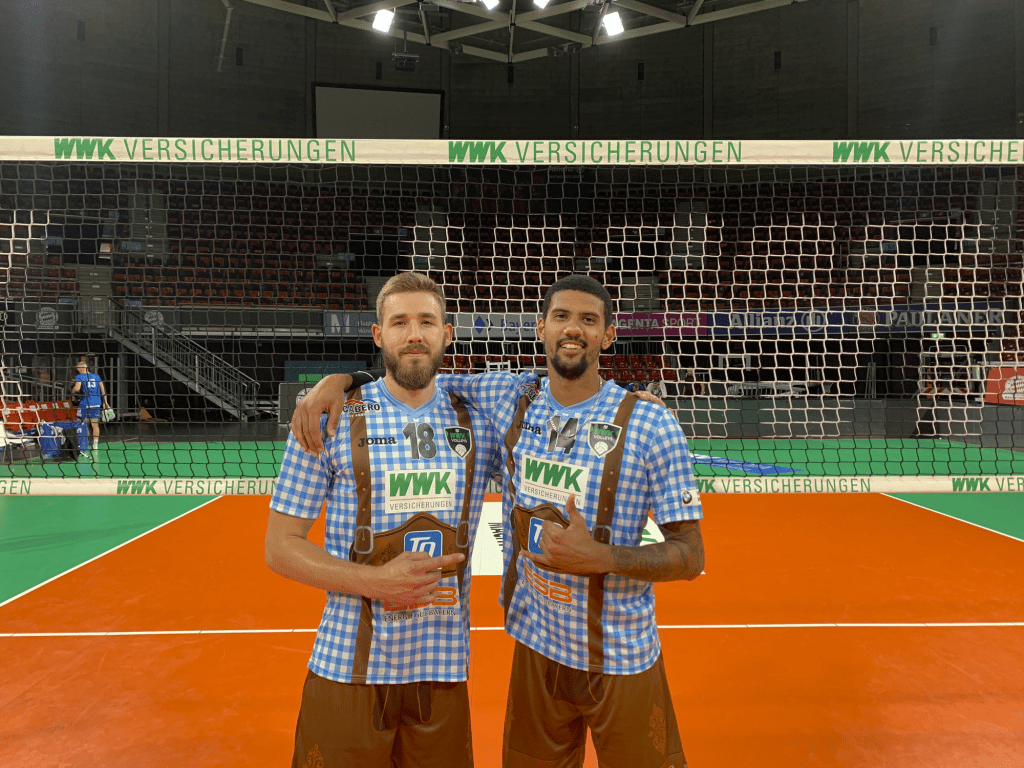 Wieczorek (left) poses with teammate Jalen Penrose in front of the net in their lederhosen jerseys while playing in Munich's Audi Dome in September. The lederhosen jerseys became popular in the volleyball community across Europe. Photo courtesy of Dave Wieczorek

Professional volleyball is a significant part of German culture. Wieczorek said he regularly plays in front of a few thousand fans and has seen up to 7,000 at games in Berlin. He also said the fans do their part to get involved, banging drums, blowing on horns and singing songs.

“The people are just into it, and the atmosphere is electric,” Wieczorek said.

Wieczorek said just as most sports fans feel a strong association to their hometown teams, love for the club isn’t just restricted to game time.

“Our club is very into the community,” Wieczorek said. “You see kids walking around in the lederhosen jerseys on the street. Our coach is great about giving back to the community as well. We have a huge fan base, and we’ve won over our city.”

As he spends more time on the roster, Wieczorek said he has started to get recognized more and more on the street or at the gym.

“I was in some German town getting physical therapy, and someone shouts, ‘Volleyball! You play for the Volleys,'” Wieczorek said. “I have no idea who these people are, but they’re super friendly, so it’s kind of cool.”

Playing for the Volleys has perks other than minor street fame. BMW sponsors the the Volleys, and the team gifted Wieczorek a new car upon joining the club. 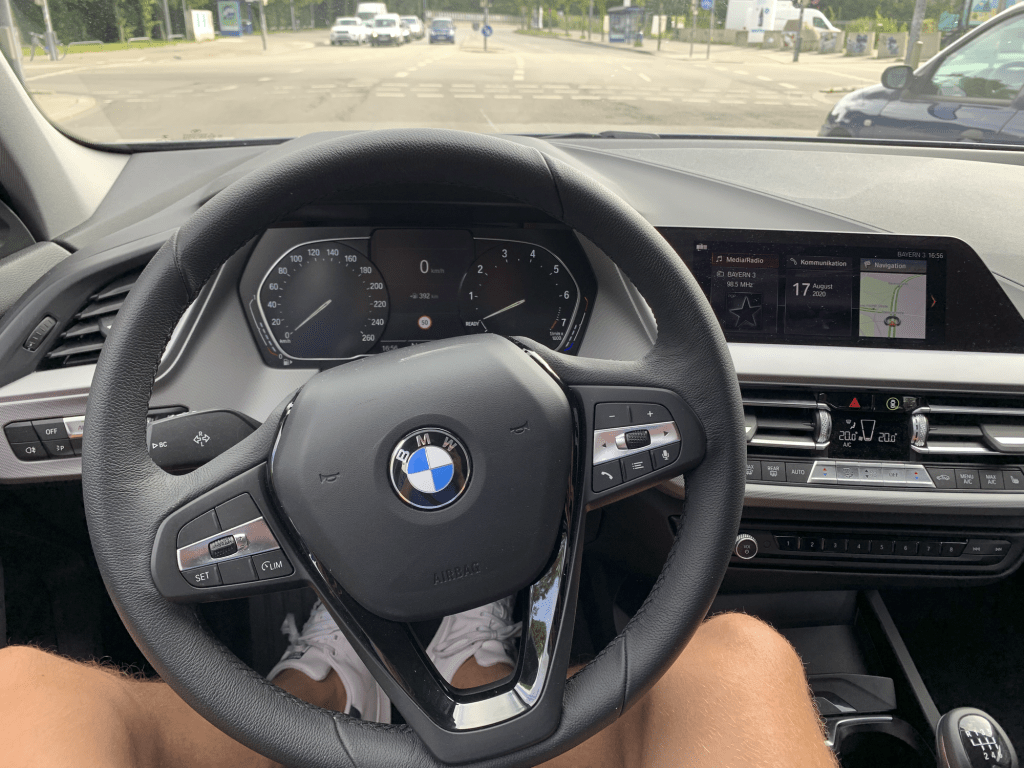 Wieczorek shows off his BMW in Munich, Germany, in September. Wieczorek's team gave every single player a brand new car from one of the team's sponsors. Photo courtesy of David Wieczorek

After spending a year and a half in Germany, Wieczorek said the culture is an easy transition, but he still hasn’t been able to pick up the language. The club paid for Wieczorek to take a language course, but it didn’t help.

“We took lessons and learned all these rules,” Wieczorek said. “Then on the last day, they said, ‘There are no rules in German — you just speak it.’ It’s chaos. There is no method to the madness with German.”

Fortunately, Wieczorek is able to get away with using English.

“Most everyone in Germany speaks English, especially the younger people,” Wieczorek said. “Our practices are run in half German and half English, so I pick up on key phrases, but for the most part, it’s all English.”

Wieczorek said he has already made lifelong friends with some of his German teammates, but he has noticed some major differences, such as diet.

“Bread, bread and beer — that’s their go-to,” Wieczorek said. “All my teammates are like, ‘Yeah, I’ll probably just have a pretzel before the game.’ All they eat are pretzels. I don’t know how they survive. Me, I’m big on fish, chicken, spaghetti — all the good American classics.”

While Wieczorek enjoys his time in Germany, he does have his eyes on bigger goals. He said he would like to play in Poland or Russia, which have more competitive leagues. He also looks to make an impact with the U.S. National Team. Wieczorek began training with the senior national team during summers in college, and he made the preliminary training camp roster this year for the upcoming Olympics.

Wieczorek said due to the players in front of him, he probably will not make the Olympic team this time, as he is one of the youngest players on the national team roster. Down the road, however, Wieczorek said there is a path to a spot on the team.

Many volleyball players want to play in the Olympics, but Wieczorek said the physical and mental toll a professional career takes often burn out successful college players.

“It takes a lot of hard work,” Wieczorek said. “It’s hard to live overseas, and it’s hard to be away from family. How do you handle all the stress and negativity, the sacrifices that people don’t see?”

While he doesn’t want to take anything for granted, Wieczorek said he still has a firm belief in his goal to compete in a couple of Olympic Games. 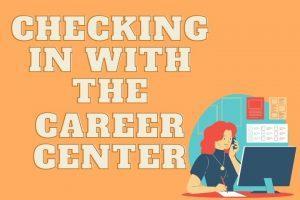