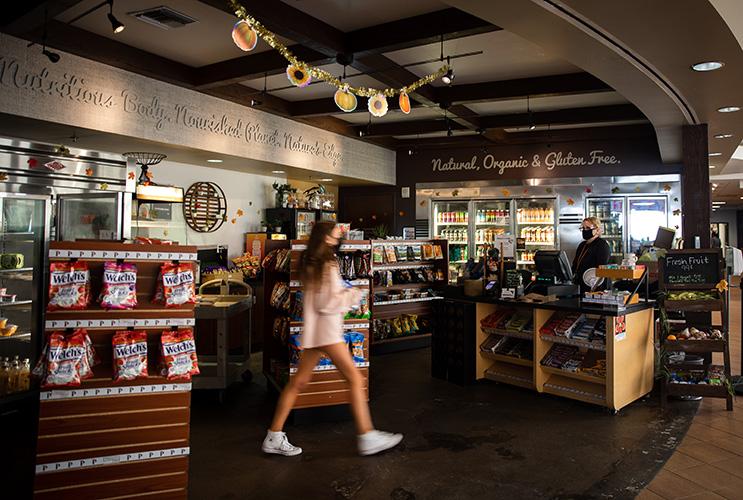 Students purchase snacks from Nature’s Edge, which is located next to the Caf. Students with dietary restrictions expressed difficulty finding options to eat on campus. Photo by Mercer Greene

Sophomore Joe Heinemann said eating at Pepperdine is often a “strategic” mission for him.

Heinemann spends mealtimes on campus hunting for Kosher foods. Beyond religious restrictions, other students work to find options that accommodate their dietary needs, which include allergies and vegetarianism.

Both the Health and Wellness Committee’s resolution for more vegan and vegetarian options on campus and sophomore class senator Sabrina Musharbash’s, resolution for Kosher options passed in the Student Government Association on Dec. 1 and Nov. 17, respectively, according to SGA’s fall 2021 resolution spreadsheet.

Musharbash began this resolution because she wants eating on campus to be more accessible to students, she said.

Nicolle Taylor, vice president and chief business officer of Pepperdine, said Sodexo utilizes labeling, personalized plans for students with more unique restrictions, the Bite app and as My Zone, a section with allergen-friendly meals and snacks, to keep students safe.

At the beginning of the year, labor shortages limited customization options, which Sodexo is bringing back, Taylor said.

“People who are either forced to avoid something they’re allergic to or who make a lifestyle choice ought to be able to get great food and good options and to continue to have improved service — and we recognize that, and we’re committed to that too,” Taylor said. “So we had some good stuff, but we know we can continue to enhance that, and we are.”

Rabbi Shalom Eagle, director of the Chabad at Pepperdine, a group that promotes Jewish life on campus, said Kosher is a dietary law set out in the Torah.

Students have mentioned to him there were limited Kosher options at Pepperdine, Eagle said, leading him to look into working with the University. Possible solutions Eagle proposed include pre-packaged Kosher meals or a Kosher food truck. Additionally, Eagle said he hosts a weekly dinner for Shabbat, the Jewish day of rest.

“Besides being a Kosher outlet for them to have a good Kosher dinner, it’s also just a great time to come and connect and show their Jewish pride and just unwind from the week,” Eagle said.

Heinemann began eating Kosher this year, as a practitioner of reform Judaism. Heinemann said the relationship between the individual and how they choose to adhere to God’s laws is unique to each person.

“I found that to be a really positive thing to both realize what I’m eating and what I’m putting in my body in both a religious and a personal way,” Heinemann said.

The biggest struggle, Heinemann said, is knowing where food comes from. While he can search food labels for Kosher identification, many Waves Cafe options do not have labels.

“Oftentimes, it can be frustrating, because even the options that you would guess would be Kosher, you’re not 100% sure because there’s no labeling,” Heinemann said. “So it comes down to just trying your best.”

Heinemann said vegan options tend to be OK, and he tries to find meals as close to Kosher as possible. Heinemann will also eat dinner at a friend’s residence because then he knows the food will be Kosher.

Heinemann said he acknowledges there will always be a need for improvement when it comes to the Caf but would like to see options clearly labeled as Kosher.

“It just takes a lot of stress off the students themselves, and that would be a really great way to help that kind of minority of students at Pepperdine,” Heinemann said.

Sophomore Chloe Chan has been vegetarian for eight years. At Pepperdine, Chan said she does not have a car, so she primarily eats food from the Caf and Starbucks or uses DoorDash.

“If I want to be healthy, I’ll stick to my usual salad,” Chan said. “But for a vegetarian, I get tired of salads way too easily. There’s always a vegan option at the Caf, which I’m thankful for. It’s not the best, but it’s there.”

Sophomore Madison Tinsley has been vegetarian for two years and said, while she appreciates the Caf bringing in outside restaurants, there often are not many options for vegetarians or vegans.

“Out of the restaurants that they bring in from outside, they need to have vegetarian options — that needs to almost be a requirement,” Tinsley said. “And I know it’s not that difficult in California — there’s no way. I come from Missouri; it was difficult to be vegetarian in Missouri.”‘

First-year Ava Campbell is a vegetarian, but because of her lactose intolerance, she said she eats more like a vegan.

“For the most part, I’m pretty neutral about the options here,” Campbell said. “I feel like there are more options than probably at other colleges, so I’m grateful for that.”

Sophomore Maddy Zilligen, who has multiple food intolerances, said there are many foods that give her migraines, but she mainly tries to stay away from gluten, which gives her the worst reaction.

“I can just always take the bread off things,” Zilligen said. “I’m lucky because I can eat gluten-friendly things, so if it’s touched gluten, I’m okay.”

When it is time to eat, Zilligen said she frequents Nature’s Edge, Jamba Juice, the food trucks and the Caf.

“I find myself eating pretty much a poke bowl every day or some form of sushi,” Zilligen said. “If I have mercury poisoning in a few years, it’s OK — you know why.”

Living in Banowsky, Zilligen does not have a stove to cook on but does make rice in the microwave. Without a car, Zilligen said she purchases most of her food on campus.

“I have snacks in my dorm if I find myself getting hungry at night,” Zilligen said. “I’ll take a lot of stuff I get back to my dorm, like a little squirrel, so I can eat it as needed.”

Eating on campus, Zilligen said, is not particularly stressful because she does have options. In terms of what she would like to see more of, Zilligen said while she appreciates the gluten-free bread and pizza crust, she would also enjoy lettuce wrap options.

“I don’t necessarily wake up like, ‘I can’t wait to go eat and see what the Caf has today,’” Zilligen said. “But there’s stuff, and there’s chocolate, so I’m a happy gal.”

Sophomore Timothy Jackson is allergic to nuts. Where Jackson eats depends on the length of lines at each location, he said; most often, he visits the Caf or one of the food trucks on campus. When deciding what to eat, Jackson both trusts that certain foods are nut free and relies on labels.

“Maybe it’s a burger — you could probably trust a burger because no regular burger is going to have nuts in it,” Jackson said. “And then depending on the stuff they have in the Caf — the curry — you have to look to see if that has nuts in it, because I know for a lot of cultures, nuts are really popular.”

Living in Towers, Jackson said makes him more likely to eat on campus or travel off campus. Jackson eats off campus around twice a week and will get Chipotle, Taco Bell or McDonald’s.

Eating at the Caf, Jackson said, is just something he has to do every day.