Tis’ the season for giving at Pepperdine, but this year Give2Pepp is not just asking for donations. They want Champions.

Calling all #Pepperdine Champions! #Give2Pepp 2019 is just around the corner, and we’re looking for those of you who are proud to share your love for Pepperdine. Join Daniel by signing up to be a Champion here: https://t.co/cin9gaHBoZ pic.twitter.com/0vkvFRq7Um

“These are the people who … are so passionate about Pepperdine and they want to share these reasons, take part in this day and really add and contribute to the day from wherever they are around the world,” Seaver Class Giving Officer Tierney Anderson said. “These are the people who go out of their way to explain why one should give to Pepperdine.”

In its third year, Give2Pepp is adding a new feature to the annual 37-hour campaign that allows any member of the community, donation or not, to submit a selfie video that highlights “what you love about Pepperdine,” a “Give2Pepp thank you tribute,” or a video announcing “Today is Give2Pepp.” Selected videos will be compiled into a short video that Give2Pepp creates and showcases on social media and their website.

More example videos can be found on Give2Pepp’s website and social media outlets.

Give2Pepp reached 3,233 donors in 2018 from as close as Malibu, stretching to as far as Malaysia, as noted on the 2018 Stats posted on the Give2Pepp website. For 2019, the Pepperdine Fund office aims to beat this number.

2018 Give2Pepp Donor Breakdown- Google Fusion
“This year we are really trying to make it a peer-to-peer campaign,” Anderson said. “Instead of us [The Pepperdine Fund] just sending out an informal letter about Give2Pepp, we will have these familiar faces that are talking about why they give to Pepperdine and why they are excited about Give2Pepp.”

VP Public Relations for Student Philanthropy Council Hannah Parkin said students are more willing to give with the peer-to-peer campaigning.

“We have so much more success, and everyone is so much more excited to give when they see their friends at the table,” Parkin said.

But success in the eyes of Give2Pepp is not based on how many zeros come after the dollar sign.

“Our focus for Give2Pepp is donors, not dollars,” Anderson said. “It’s all about participation that day.”

The importance of donors

So why focus on donors, not dollars?

U.S. News & World Report measures the academic quality of each school on statistical indicators that fall under eight categories: social mobility, first-year student retention and graduation of students; reputation; faculty resources; admissions selectivity; financial resources; alumni giving; and graduation rate performance. These categories are then put into comparison based on the percentage of students expected to graduate and those who already, as noted on the U.S. News & World Report’s website.

“The percentage of alumni giving serves as a proxy for how satisfied students are with the school,” according to the U.S. News and World Report website. “A higher average alumni giving rate scores better than a lower rate in the ranking model.”

“Give2Pepp provides a single day for alumni of Seaver College and all four graduate schools to come together in support of their alma mater as we continue to work towards increasing the number of our alumni who give back to Pepperdine,” Anderson wrote. “Current undergraduate seniors are included in their alumni count.”

Although the 2019 ranking indicator shows that some factors will be weighted differently this year as compared to 2018, alumni giving remains at 5 percent of the overall total score for a school’s ranking.

“With the donor goal, we are encouraging students especially to give five dollars,” Parkin said. “It’s not a huge amount that we are asking students to give, and I think that ‘Pepperdine Passions’ is really where that comes into play. The five dollars is being directed to exactly where you want it to go: your abroad program, your academic division.”

Pepperdine Passions – Why Students Should Give

Anderson and Parkin both agree that if they are able to push the fact that Give2Pepp allows individuals to direct their donation to whatever program or department they want – to their Pepperdine passion – then people will be more willing to participate in the campaign.

“So, it’s not just a small drop in this big bucket where you have no idea what’s happening with it,” Anderson said. “It’s going to the fund that you want it to go to. I think that is what really helps people kind of open up to that idea of giving.”

From the student perspective, Parkin said because of the wide range of interests at Pepperdine, Give2Pepp has the ability to improve everyone’s experience at Pepperdine by making a direct impact with their “gift.”

“We always joke by saying ‘you don’t want your five dollars going to something that you don’t really know or will ever see. You will want to impact whatever has impacted you on this campus,’” Anderson said. “So, we call it ‘giving to your Pepperdine Passion.’”

The implementation of Pepperdine Passions has been a “big positive” for Give2Pepp because it has increased student participation in the giving process, Anderson said.

“I think it’s really exciting to see the whole student body come together for one day and be very passionate about giving back to Pepperdine,” Parkin said.

While students seem to understand the importance of giving to their passions, many agree that alumni should feel the same way.

“I think it is important for for alumni to give because it’s a way for them to help improve things that they wish were better when they were here – A way to give back to what helped them get to where they are now,” junior Shea Corwin said.

But students are not only giving. They are also getting involved.

“It’s so amazing to see all the people who are excited to volunteer, who are not even apart of SPC [Student Philanthropy Council], but they very much just want to help out and be apart of this amazing giving day,” said Parkin.

The Student Philanthropy Council plans to hold tabling events at various locations throughout the event in order to reach the widest range of students possible, Parkin said. Their reach is so far that Give2Pepp also has representatives around the world who manage the campaign in their abroad houses.

Both on campus & around the world, #Give2Pepp generated a lot of chatter. Check out some of the highlights from the day in this wrap up. pic.twitter.com/52Q1SZywaE

Despite the noted excitement surrounding Give2Pepp, Anderson said there have been some opportunities for this year regarding whether or not the donations made to the Pepperdine Strong fund would impact donor’s attitudes for Give2Pepp.

“That is definitely something that our office has been thinking about,” Anderson said. “We are encouraging these people who did give back to Pepperdine Strong, and who did make a difference in the fall with that specific campaign, to consider being a part of the donor family again and giving back during those 37 hours so we can count them as a donor during that day.”

The Pepperdine Strong fund was created after the Borderline shooting and Woolsey Fire tragedies that took place on Nov. 7 and 8. As stated on the campaign’s website, “funds will enable Pepperdine to respond quickly to our community in this time of crisis, providing needed support for the students, faculty, and staff directly impacted by these events.”

The Pepperdine Strong Fund has raised over $480,000 and has over 1,700 supporters, according to their website.

“With Pepperdine Strong, we saw a lot of young alumni giving to that fund, which was really neat to see,” Anderson said. “So we would like to continue to educate them current students on those Pepperdine Passions and continue to get them interested in seeing where they can give back, and keeping that momentum going of the generosity and support.”

Where it all started

Anderson said Give2Pepp started back in 2016 in the Pepperdine Fund office. After observing other universities have success with university-wide giving days, the office decided to try it out at Pepperdine.

Advancementn played a major role in getting Give2Pepp started, Anderson said. Advancement is the direct contact for those interested in becoming Give2Pepp Champions, as stated on Pepperdine’s Giving Page Website.

“The 37-hour duration was chosen to honor our founding in 1937 and also to give Pepperdine friends in every time zone a chance to participate,” as stated on the Give2Pepp website.

Gifts can be made online, over the phone, in person, mailed or through Venmo.

“You can give back to Pepperdine at any time,” Anderson wrote. “But when you give during Give2Pepp, you’ll be joining thousands of others in the global Pepperdine community to show that together, ‘We Are Pepp.’ Every gift of $5 or more makes a difference.” 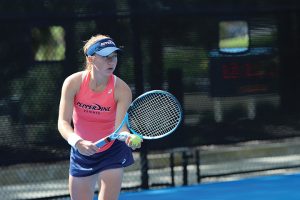