As big-name actors and directors assembled at the Beverly Hills Hilton on Sunday afternoon, they were greeted not only by the glamour of the Golden Globes, but also by a rag-tag group of protesters from the Westboro Baptist Church. A group of counter-protesters, joined by two Pepperdine students, repudiated the message of the WBC.

A total of three protestors represented the WBC, holding signs and wearing American flags across the street from the entrance to the hotel. The church, based out of Kansas, is notorious for its anti-gay activity as well as picketing funerals of military men and women. Bearing signs with slogans like “God Hates the Media” and “Mourn For Your Sins,” the protestors claimed to be spreading the word of God.

The thrust of the protestors’ purpose was to speak out against the entertainment industry’s pro-gay leaning. Said Margie Phelps, wife of the founder of the WBC, “You’ve got low-hangin’ fruit all over the country. Pick anything!” Phelps travels around the country to spearhead protests such as the one held Sunday.“Every human sins — the question is, then what? Repent? Or idolize it and make sitcoms about it?” she said.

“[Hollywood] is not encouraging gay marriage — they are militantly insisting on it,” Phelps said, indicating the hotel entrance to make her point. The three protestors from WBC stood across from the hotel for two hours, as celebrities arrived for the award ceremony. 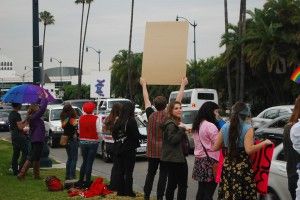 But these three protestors were not the only ones present that afternoon. A group of counter-protestors, including two Pepperdine students from the Reach OUT LGBT group on campus, presented a different message to the passersby. The group, which outnumbered the WBC members 5 to 1, stood close by, bearing signs with counter-messages, such as “The Globe Would Be Golden Without Hate.”

Pepperdine junior Sarah Gordon took a unique approach by dressing like Jesus, complete with requisite beard and standing behind signs that read “God Hates You” with a sign of her own that read “No I Don’t.” Gordon said she has always been frustrated with the WBC’s actions. “I felt like if we could make light of what they were saying it would take the sting away.”

Gordon called the afternoon protest a very “happy experience,” explaining that she was happy about “meeting people who were active and really cared about gay issues, especially since Pepperdine doesn’t have a of opportunities for that.” For Gordon, the counter-protest was successful because it showed the mutual support that both the LGBT community and the Christian community can offer.

Senior Lindsay Jakows, co-president of Reach OUT, had never been to a protest before Sunday but appreciated the support that was shown throughout the course of the afternoon. “I think it’s especially important to represent Pepperdine at something like that to show that not all Christians are hateful toward the LGBT community,” she said. “It’s important to physically demonstrate to people that there’s more support on our side.” Sunday’s counter-protest event was especially important for Reach OUT, as they recently released a petition asking Pepperdine’s administration to overturn its decision to deny Reach OUT recognition.

Most college students, regardless of having varied majors, interests and post-graduate goals, await the same legacy after...
Copyright 2013 Jupiter Premium Magazine Theme
Back to top