‘We put together a little band’ 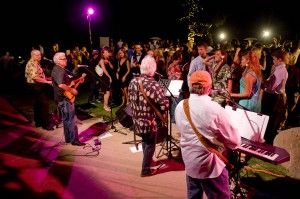 Not only is President Andrew K. Benton’s band Mid-life Crisis a unique aspect of the university, but it also plays an integral part in bringing the students together as a community.

The Mid-life Crisis’ original bandmembers include Benton who sings and plays the guitar, Dr. Jeff Pippin on guitar, and Dr. Chris Stivers on keyboard. The band has incorporated several other members throughout the years, including current members Reber and Logan Carroll.

Benton has been a performer longer than most students have been alive.

That was back in 1989. The “little band” soon sneaked its way into student life on campus.

The first experience freshmen have as a new class at My Tie and the last they have as seniors at Rock the Brock both feature Benton and Mid-life Crisis to commemorate two milestones in the students’ university experience.

Over the years, Mid-life Crisis has made meaningful connections with the students and has helped build the Pepperdine community as a whole through their genuine love of music and performance.

Benton described how while in Mid-life Crisis, specifically playing for a crowd of students, he has noticed a transformative connection on stage.

“I like making memories, and anything we can do to imprint good memories and good times in our students.… I think what a blessing and what an opportunity that is, and along the way we get to make music,” Benton said.

“When the audience becomes unself-conscious and just kind of rolls with it … and they kind of don’t pay attention to us anymore, they are more into enjoying it with themselves, that’s really fun,” Stivers said.

Pippin further expanded on this point.

“Every year playing for the students, both the freshmen and the seniors, is new,” Pippin said. “You know, you think you would get tired of it, but you don’t because they keep enjoying it and when you see that, that’s what keeps us coming back.”

Not only have the members of Mid-life Crisis made their mark on the Pepperdine community, but they have been able to expand to venues such as Washington, D.C.

“When he [Benton] served as the chair of the American Council on Education and they had their annual meeting in Washington, D.C., he had noticed that the prior years’ entertainment had been pretty dry and boring, so when he became chairman, he offered to provide entertainment, and the whole band went to Washington and played at the event,” Pippin said.

Benton described this experience as the one that solidified their band as a rock group.

“We called that the ‘dodge the bullet tour’ because the night before, we were out doing a rehearsal and coming back from the rehearsal the van we were in got shot at,” Benton said. “The bullet passed just in front of Dr. Stivers’ chest and just behind my back.”

And where do these rock stars of the Pepperdine community get their musical inspiration?

“My favorite band is the Beatles and probably second to them when I was in high school, I really liked The Doors and the Rolling Stones,” Pippin responded.

Through their genuine love of music and performance, Benton and Mid-life Crisis have become an uplifting part of the Pepperdine community and have made the university truly unique.

Be sure to see Mid-life Crisis perform at the annual Christmas Show on Dec. 6 during the Christmas Tree Lighting ceremony.

You can cry. As this is my last column of the semester, I give you permission to feel how you need to feel. Weeping is welcomed;...
Copyright 2013 Jupiter Premium Magazine Theme
Back to top