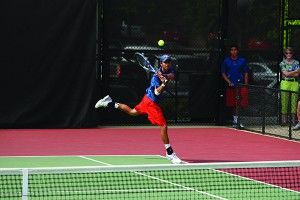 At the beginning of the season, all the coaches from the West Coast Conference voted the Pepperdine men’s tennis team to finish first in the 2013 WCC. Our 2012 reigning WCC champs also have several players listed on the preseason all-conference team: senior Sebastian Fanselow, 2012 WCC Player of the Year, and senior Finn Tearney, 2012 All-WCC First Team for singles and doubles.

No. 7 Waves faced the No. 14 Texas Longhorns here in Malibu. In the singles competition, Fanselow and Tearney, and juniors Francis Alacantara and David Sofaer swept the singles matches against the Texas team. In the doubles competition, Tearney and Alcantara defeated their opponents 8-6, along with Moush Hovannisyan and Sofaer who beat the Longhorns 8-5.

The Pepperdine women’s tennis team has also been selected to finish first in the WCC finals. The No. 33 Waves opened up the season Jan. 28 against the USC Trojans here in Malibu. The Trojans defeated the Waves in six close singles matches but the doubles team of sophomore Lorraine Guillermo and senior Khunpak Issara gave the Waves a glimmer of hope with their unfinished 5-4 game against the Trojans.

The Women’s tennis team faced Fresno State in their second game of the season. Issara and Guillermo continued to carry the beacon of hope for the Waves in their singles matches, Issara defeating her opponent 7-6, 6-3 and Guillermo with a 6-2, 6-1 win. Junior Ale Granillo also defeated Bulldog opponent Bianca Modoc 6-2, 7-5.

Women’s tennis will have their next two home matches this weekend against UC Irvine on Feb. 8 at 1p.m. and on Feb. 9 against Stanford at 1p.m. The men’s team will go to the Intercollegiate Tennis Association National Team Indoor Championship Feb. 15 to 18 in Seattle.

On Thursday night, the men’s basketball team relinquished a 12-point lead early in the second half to fall against BYU. The Waves, who seemed to be in total control of the game, couldn’t maintain the momentum necessary to defeat the third-seeded Cougars.

Despite freshman forward Stacy Davis’ 17-point contribution, the Waves were unable to rally back in time to tie the game and force a potential overtime period. Overall, the Waves finished with a better shooting percentage than their rivals, 42.3 percent to 41.7 percent but were overpowered by the Cougars’ offensive prowess. BYU scored a total of 43 points in the second half.

The feisty Waves were lowered to No. 7 in the standings ahead of Saturday afternoon’s big game against San Francisco, which also ended in defeat, 86-78. Pepperdine Coach Marty Wilson said, “We played hard. Our guys are getting it. They are understanding what it takes.”

The increasing familiarity and team chemistry will surely come in handy for the Waves, who will be visiting conference rivals and top teams in the conference, Gonzaga and Portland on Thursday (Feb. 7) and Saturday (Feb. 9).

USC dominated the block stats with 16 total versus Pepperdine’s 6. This is the second time this season the Waves have been out-blocked; however USC couldn’t come back from Nikola Antonijevic and Kyle Gerrans’ 5-0 run that sealed the Trojans’ fate in the fourth game.

So far this season, the mens volleyball team has been unbeatable on the courts at home.

The team played No. 3 Long Beach State on Wednesday who beat previously undefeated BYU earlier this season, and beat the Waves in both games against them last semester. But the Waves dominated on the courts to end the game decisively in 3-0. Volleyball also plays No. 10 Cal State Northridge later in the week on Friday, who they played in split meetings last season. This will be a tough match against strong teams.

“They play very consistent volleyball so we have to be ready to block and dig some balls.” said senior Maurice Torres.

Who even pays attention to the Super Bowl these days, especially when your favorite team isn’t competing? It was all about...
Copyright 2013 Jupiter Premium Magazine Theme
Back to top